Messier 4 or M4 (also designated NGC 6121) is a globular cluster in the constellation of Scorpius. It was discovered by Philippe Loys de Chéseaux in 1746 and catalogued by Charles Messier in 1764. It was the first globular cluster in which individual stars were resolved.

M4 is conspicuous in even the smallest of telescopes as a fuzzy ball of light. It appears about the same size as the Moon in the sky. It is one of the easiest globular clusters to find, being located only 1.3 degrees west of the bright star Antares, with both objects being visible in a wide field telescope. Modestly sized telescopes will begin to resolve individual stars of which the brightest in M4 are of apparent magnitude 10.8. 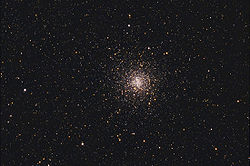 M4 is a rather loosely concentrated cluster of class IX and measures 75 light years across. It features a characteristic "bar" structure across its core, visible to moderate sized telescopes. The structure consists of 11th magnitude stars and is approximately 2.5' long and was first noted by William Herschel in 1783. At least 43 variable stars have been observed within M4.

M4 is approximately 7,200 light years away, the same distance as NGC 6397, making these the two closest globular clusters to our Solar System. It has an estimated age of 12.2 billion years.[2]

In astronomy, the abundance of elements other than hydrogen and helium is called the metallicity, and it is usually denoted by the abundance ratio of iron to hydrogen as compared to the Sun. For this cluster, the measured abundance of iron is equal to:

This value is the logarithm of the ratio of iron to hydrogen relative to the same ratio in the Sun. Thus the cluster has an abundance of iron equal to 8.5% of the iron abundance in the Sun. Based upon the abundance measurements, there is evidence that this cluster hosts two distinct stellar populations. Each of the populations is a group of stars that all formed at about the same time. Thus the cluster may have undergone at least two separate cycles of star formation.[3]

Photographs taken with the Hubble Space Telescope in 1995 have revealed white dwarf stars in M4 that are among the oldest known stars in the Milky Way Galaxy at an age of 13 billion years. One such white dwarf has been found to be a binary star with a pulsar companion, PSR B1620-26 and a planet orbiting it with a mass of 2.5 times that of Jupiter.

In 1987 a millisecond pulsar was discovered in M4 with a period of 3.0 milliseconds or about ten times faster than the Crab Pulsar.