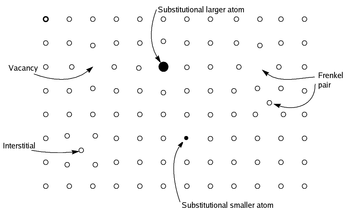 Crystallographic defects can cause solids to be non-stoichiometric

Non-stoichiometric compounds are chemical compounds with an elemental composition that cannot be represented by a ratio of well-defined natural numbers, and therefore violate the law of definite proportions. Often, they are solids that contain crystallographic point defects, such as interstitial atoms and vacancies, which result in excess or deficiency of an element, respectively. Since solids are overall electrically neutral, the defect in an ionic compound is compensated by a change in the charge of other atoms in the solid, either by changing their oxidation state, or by replacing them with atoms of different elements with a different charge.[1]

Nonstoichiometry is pervasive for transition metal oxides, especially when the metal is not in its highest oxidation state.[2] For example, although wüstite (ferrous oxide) has an ideal (stoichiometric) formula FeO, the actual stoichiometry is closer to Fe0.95O. The non-stoichiometry occurs because of the ease of oxidation of Fe2+ to Fe3+ effectively replacing a small portion of Fe2+ with two thirds their number of Fe3+. Thus for every three "missing" Fe2+ ions, the crystal contains two Fe3+ ions to balance the charge. The composition of a non-stoichiometric compound usually varies in a continuous manner over a narrow range. Thus, the formula for wüstite is written as Fe1-xO, where x is a small number (0.05 in the previous example) representing the deviation from the "ideal" formula.[3] Nonstoichiometry is especially important in solid, three-dimensional polymers that can tolerate mistakes. To some extent, entropy drives all solids to be non-stoichiometric. But for practical purposes, the term describes materials where the non-stoichiometry is measurable, usually at least 1% of the ideal composition.

Non-stoichiometric compounds are also known as berthollides (as opposed to the stoichiometric compounds or daltonides). The names come from Claude Louis Berthollet and John Dalton, respectively, who in the 19th century advocated rival theories of the composition of substances. Although Dalton "won" for the most part, it was later recognized that the law of definite proportions did have important exceptions.[4]

The cuprate superconductors highlight the concept of "defect" structures, which is related to non-stoichiometry. YBa2Cu3O7−x can be viewed as a variant of the perovskite family of materials, which have idealized stoichiometry ABO3. For the cuprates, Y + Ba occupy "A sites" whereas Cu occupies the "B sites". The non-defect material would have the stoichiometry YBa2Cu3O9. Using this way of describing a structure, W40O118 is said to be a defect variant of WO3. 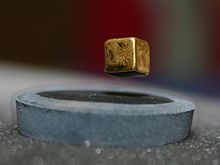 A magnet levitating above a nitrogen-cooled high-temperature superconductor

It is sometimes difficult to determine if a material is non-stoichiometric or if the formula is best represented by large numbers. The oxides of tungsten illustrate this situation. Starting from the idealized material tungsten trioxide, one can generate a series of related materials that are slightly deficient in oxygen. These oxygen-deficient species can be described as WO3-x but in fact they are stoichiometric species with large unit cells with the formulas WnO(3n-2) where n = 20, 24, 25, 40. Thus, the last species can be described with the stoichiometric formula W40O118, whereas the non-stoichiometric description WO2.95 implies a more random distribution of oxide vacancies.[5]

The monosulfides of the transition metals are often nonstoichiometric. Best known perhaps is iron(II) sulfide (mineral pyrrhotite) with a composition Fe(1-x)S (x = 0 to 0.2). The rare stoichiometric FeS endmember is known as mineral troilite. Pyrrhotite is remarkable in that it has numerous polytypes, i.e. crystalline forms differing in symmetry (monoclinic or hexagonal) and composition (Fe7S8, Fe9S10, Fe11S12 and others). These materials are always iron-deficient owing to the presence of lattice defects, namely iron vacancies. Despite those defects, the composition is usually expressed as a ratio of large numbers and the crystals symmetry is relatively high. This means the iron vacancies are not randomly scattered over the crystal, but form certain regular configurations. Those vacancies strongly affect the magnetic properties of pyrrhotite: the magnetism increases with the concentration of vacancies and is absent for the stoichiometric FeS. [6]

Many useful chemicals are produced by the reactions of hydrocarbons with oxygen, a conversion that is catalyzed by metal oxides. The process operates via the transfer of "lattice" oxygen to the hydrocarbon substrate, a step that temporarily generates a vacancy. In a subsequent step, the oxygen vacancy is replenished by the O2. Such catalysts rely on the ability of the metal oxide to form phases that are not stoichiometric. An analogous sequence of events describes other kinds of atom-transfer reactions including hydrogenation and hydrodesulfurization catalysed by solid catalysts. These considerations also highlight the fact that stoichiometry is determined by the interior of crystals: the surfaces of crystals often do not follow the stoichiometry of the bulk. The complex structures on surfaces are described by the term "surface reconstruction."

The migration of atoms within a solid is strongly influenced by the defects associated with non-stoichiometry. These defect sites provide pathways for atoms and ions to migrate through the otherwise dense ensemble of atoms that form the crystals. Oxygen sensors and solid state batteries are two applications that rely on oxide vacancies.

Non-stoichiometry, which is change in the composition at the atomic scale, should be distinguished from macroscopic sample inhomogeneity and associated measurement artifacts. The chemical composition of materials is often measured using high-energy particles (electrons, ions, X-rays, etc.) as the probes. Those particles have different penetration depths into the studied material and often have limited accuracy (~10 %). When applied to a chemically reactive material, they can falsely evaluate it as non-stoichiometric. Let us consider a metal, such as aluminium. In air, it is covered by nanometer-thick natural oxide Al2O3. Surface sensitive techniques will detect stoichiometric Al2O3. Techniques probing beyond the oxide would detect a non-stoichiometric oxide, and the bulk analysis methods would yield (almost) pure aluminum. Because of such measurement problems, the composition of most thin films is measured as non-stoichiometric.