Deodorants are substances applied to the body to affect body odor caused by bacterial growth and the smell associated with bacterial breakdown of perspiration in armpits, feet and other areas of the body. A subgroup of deodorants, antiperspirants, affect odor as well as prevent sweating by affecting sweat glands. Antiperspirants are typically applied to the underarms, while deodorants may also be used on feet and other areas in the form of body sprays. In the United States, deodorants are classified and regulated as cosmetics by the U.S. Food and Drug Administration (FDA). Antiperspirants are classified as drugs by the FDA.[1]

The first commercial deodorant, Mum, was introduced and patented in the late nineteenth century by an inventor in Philadelphia, Pennsylvania, whose name has been lost to history.[2] The product was briefly withdrawn from the market in the U.S.,[2] but is currently available at U.S. retailers under the brand Ban.[3] The modern formulation of the antiperspirant was patented by Jules Montenier on January 28, 1941.[4] This formulation was first found in "Stopette" deodorant spray, which Time Magazine called "the best-selling deodorant of the early 1950s".[5] Stopette was later eclipsed by many other brands as the 1941 patent expired.

A small percentage of people are allergic to aluminium and may experience contact dermatitis when exposed to aluminium containing deodorants.[6] Aluminium-containing antiperspirants are generally safe according to current research. 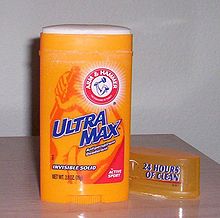 Human perspiration is largely odorless until it is fermented by bacteria that thrive in hot, humid environments. The human underarm is among the most consistently warm areas on the surface of the human body, and sweat glands provide moisture, which when excreted, has a vital cooling effect. When adult armpits are washed with alkaline pH soap, the skin loses its acid mantle (pH 4.5 - 6), raising the skin pH and disrupting the skin barrier.[7] As many bacteria thrive in this elevated pH environment,[8] this makes the skin susceptible to bacterial colonization.[8] The bacteria feed on the sweat from the apocrine glands and on dead skin and hair cells, releasing trans-3-Methyl-2-hexenoic acid in their waste, which is the primary cause of body odor.[9] Underarm hair wicks the moisture away from the skin and aids in keeping the skin dry enough to prevent or diminish bacterial colonization. The hair is less susceptible to bacterial growth and therefore is ideal for preventing the bacterial odor.[10]

Deodorants are classified and regulated as cosmetics by the U.S. Food and Drug Administration (FDA)[1] and are designed to eliminate odor. Deodorants are usually alcohol-based. Alcohol initially stimulates sweating, but may also temporarily kill bacteria.[11] Deodorants can be formulated with other, more persistent antimicrobials such as triclosan, or with metal chelant compounds that slow bacterial growth. Deodorants may contain perfume fragrances or natural essential oils intended to mask the odor of perspiration.

Deodorants combined with antiperspirant agents are classified as drugs by the FDA.[1] Antiperspirants attempt to stop or significantly reduce perspiration and thus reduce the moist climate in which bacteria thrive. Aluminium chloride, aluminium chlorohydrate, and aluminium-zirconium compounds, most notably aluminium zirconium tetrachlorohydrex gly and aluminium zirconium trichlorohydrex gly, are frequently used in antiperspirants. Aluminium chlorohydrate and aluminium zirconium tetrachlorohydrate gly are the most frequent active ingredients in commercial antiperspirants.[12] Aluminium-based complexes react with the electrolytes in the sweat to form a gel plug in the duct of the sweat gland. The plugs prevent the gland from excreting liquid and are removed over time by the natural sloughing of the skin. The metal salts work in another way to prevent sweat from reaching the surface of the skin: the aluminium salts interact with the keratin fibrils in the sweat ducts and form a physical plug that prevents sweat from reaching the skin’s surface. Aluminium salts also have a slight astringent effect on the pores; causing them to contract, further preventing sweat from reaching the surface of the skin.[13] The blockage of a large number of sweat glands reduces the amount of sweat produced in the underarms, though this may vary from person to person.

Over-the-counter products labeled as "natural deodorant crystal" containing the chemical potassium alum have gained new-found popularity as an alternative health product.[14] A popular alternative to modern commercial deodorants is ammonium alum, which is a common type of alum sold in crystal form and often referred to as a deodorant crystal. It has been used as a deodorant throughout history in Thailand, the Far East, Mexico and other countries.[citation needed]

Deodorants and antiperspirants come in many forms. What is commonly used varies in different countries. In Europe, aerosol sprays are popular, as are cream and roll-on forms. In the United States, solid or gel forms are dominant.

In the 9th century, Ziryab invented under-arm deodorants in Al-Andalus.[15] In 1888, the first commercial deodorant, Mum, was developed and patented by a U.S. inventor in Philadelphia, Pennsylvania, whose name has been lost to history.[2] The small company was bought by Bristol-Myers in 1931 and in the late 1940s, marketing executive Edward Gelsthorpe decided to develop an applicator based on the newly invented ball-point pen.[2] In 1952, the company began marketing the product under the name Ban Roll-On.[2] The product was briefly withdrawn from the market in the U.S.[2] It is once again available at retailers in the U.S. under the brand Ban.[3] In the UK it is sold under the names Mum Solid and Mum Pump Spray.[2] Chattem acquired Ban deodorant brand in 1998[16] and subsequently sold it to Kao Corporation in 2000.[17]

The modern formulation of the antiperspirant was patented by Jules Montenier on January 28, 1941.[4] This patent addressed the problem of the excessive acidity of aluminium chloride and its excessive irritation of the skin, by combining it with a soluble nitrile or a similar compound.[18] This formulation was first found in "Stopette" deodorant spray, which Time Magazine called "the best-selling deodorant of the early 1950s".[5] "Stopette" gained its prominence as the first and long-time sponsor of the game show What's My Line?, and was later eclipsed by many other brands as the 1941 patent expired.

In the early 1960s, the first aerosol antiperspirant in the marketplace was Gillette's Right Guard,[11] whose brand was later sold to Henkel in 2006.[19] Aerosols were popular because they let the user dispense a spray without coming in contact with the underarm area.[11] By the late 1960s, half of all the antiperspirants sold in the U.S. were aerosols, and continued to grow in all sales to 82% by the early 1970s.[11] However, in the late 1970s two problems arose which greatly changed the popularity of these products.[11] First, in 1977 the Food and Drug Administration (FDA) banned the active ingredient used in aerosols, aluminium zirconium chemicals, due to safety concerns over long term inhalation.[11] Second, the Environmental Protection Agency (EPA) limited the use of chlorofluorocarbon (CFC) propellants used in aerosols due to awareness that these gases can contribute to depleting the ozone layer.[11] As the popularity of aerosols slowly decreased, stick antiperspirants became more and more popular.[11] Today, sticks are the most popular type of antiperspirant.[11]

The health effects of antiperspirants are a matter of dispute regarding their extent. A small percentage of people are allergic to aluminium and may experience contact dermatitis when exposed to aluminium-containing deodorants.[6] Aluminium salts from use of deodorants caused contact dermatitis to the skin.[20] After using a deodorant containing zirconium, the skin may develop an allergic, axillary granuloma response.[21] Deodorant crystals containing synthetically made potassium alum were found to be a weak irritant to the skin.[14] Alcohol-free deodorant is available for those with sensitive skin. Aluminium is one of the few abundant elements that appears to have no beneficial function to living cells (non-essential metal).[22] Frequent use of deodorants was associated with blood concentrations of the synthetic musk galaxolide.[23]

Aluminium, present most often in antiperspirants, but not usually present in non-antiperspirant deodorants, has been established as a neurotoxin.[24][25][26][27] At high doses, aluminium itself adversely affects the blood-brain barrier, is capable of causing DNA damage, and has adverse epigenetic effects.[24][28] Research has shown that high doses of the aluminium salts used in antiperspirants have detrimental effects to a number of species such as non-human primates,[29] mice,[30] and dogs.[31]

Experiments with mice applying aqueous solution of aluminium chloride to the skin resulted in "a significant increase in urine, serum, and whole brain aluminium"[32] and transplacental passage.[30] A 2001 study showed that the use of aluminium chlorohydrate, the active ingredient in many antiperspirants, does not lead to a significant (vs. ingestion via diet) increase in aluminium levels in the body with one-time use.[33] The Food and Drug Administration "acknowledges that small amounts of aluminium can be absorbed from the gastrointestinal tract and through the skin."[34]

The Alzheimer's Society advises that "environmental factors have been put forward as possible contributory causes of Alzheimer's disease in some people. Among these is aluminium. There is circumstantial evidence linking this metal with Alzheimer's disease, but no causal relationship has yet been proved. As evidence for other causes continues to grow, a possible link with aluminium seems increasingly unlikely."[39]

A 2002 study stated "[t]he rumor that antiperspirant use causes breast cancer continues to circulate the Internet. Although unfounded, there have been no published epidemiologic studies to support or refute this claim."[40] The American Cancer Society (ACS) and the National Cancer Institute (NCI) were very much concerned about the e-mails rumors directly linking antiperspirants to cancer that both put out information on the Internet stating there was no evidence linking the cosmetic products with cancer.[41] According to the ACS "studies have not shown any direct link between parabens and any health problems, including breast cancer. What has been found is that there are many other compounds in the environment that also mimic naturally produced estrogen."[42] According to researchers at the NCI, they "are not aware of any conclusive evidence linking the use of underarm antiperspirants or deodorants and the subsequent development of breast cancer."[43] "Absence of evidence is not evidence of absence of a harmful effect" and "these chemicals are being directly applied daily, by very large numbers of people, and the long-term health effects of exposure are essentially unknown," toxicologist Philip W. Harvey tells WebMD in an interview.[44] But ACS epidemiologist Michael Thun argued that "even if the parabens do promote estrogen-dependent tumor growth, the risk from cosmetic use is "minuscule" compared with other known tumor promoters."[44] The cosmetics industry insists the paraben chemicals used as preservatives in underarm deodorants and other cosmetics, which are regulatory approved, are safe.[45]

2004 and 2005 studies led by researcher Phil Darbre, hypothesizes that particular substances in deodorants, such as preservatives called parabens, or bolts such as aluminium chloride used in antiperspirants, get into the bloodstream or accumulate in breast tissue, where they enhance or emulate the effects of estrogen, which stimulates the growth of cancerous breast cells.[48][49] A 2007 study found that personal care products are a potential contributor to the body burden of aluminium and newer evidence has linked breast cancer with aluminium-based antiperspirants.[22] A 2008 study stated that no scientific evidence supports the hypothesis that deodorants and/or antiperspirants increase the incidence of breast cancer.[50] A study published in 2009 by the journal The Breast Cancer Research proposed a link between breast cancer and the application of cosmetic chemicals including phthalates and aluminium salts in the underarm region, because of their oestrogenic and/or genotoxic properties, which provides an evidence-based hypothesis capable of further research.[51]

Aluminium zirconium tetrachlorohydrex gly, a common antiperspirant, is a cause of "armpit stains" on clothing, reacting with sweat to create yellow stains.[52] Underarm liners are an alternative to deodorants that do not leave stains.[53][54]