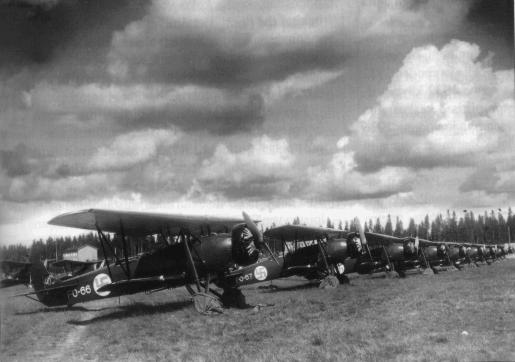 Fokker C.V was a Dutch light and bomber biplane aircraft manufactured by . It was designed by and the series manufacture began in 1924 at Fokker in Amsterdam.

The C.V was constructed in the early 1920s by Anthony Fokker. The aircraft was intended as a twin-seated reconnaissance and bomber aircraft. When shown to the public in 1924, the C.V was the first and it was manufactured in a variety of versions; the customer could choose from five different wing constructions (which varied in wing span). The radial engines could give between 450-970 hp. The landing gear could be changed from wheels to pontoons. The aircraft became an export success for Fokker, it was sold and/or license manufactured in Bolivia, China, Denmark, Finland, Hungary, Italy, Japan, the Netherlands, Norway, Switzerland, the Soviet Union and the US. [War over Holland: [http://www.waroverholland.nl/index.php?url=/uk_weap010.html Fokker C.V] en icon] Sweden purchased two different versions to use as models for their license manufacturing of the reconnaissance version S 6 and a fighter version J 3.

The Dutch Air Force used the C.V in front line service against the German during . After the Dutch surrender, the aircraft were taken over by Luftwaffe and used on the Eastern front until 1944.Fact|date=May 2008 The Swiss Air Force used their C.Vs as s until 1954, after their retirement from frontline service.

The bought its first C.V-Ds and C.V-Es in 1926. The two versions were designated as long-winged (-E) and short-winged (-D) Fokkers. The initial purchase agreement with Fokker included license production rights and in the period 1929-1931 twenty-seven C.V-Ds were manufactured at the NoAAS' aircraft factory at . After the production of C.V-Ds ended a further fifteen C.V-Es were followed between 1932 and 1939. In total the NoAAS operated seventy-two Fokker C.Vs, forty of which were license built in Norway. When the Germans invaded Norway on , forty Fokker C.Vs were still in Norwegian service. The C.Vs were based on several air bases in different parts of the country and mostly saw service as reconnaissance and light transport aircraft. Although the planes were hopelessly outdated as combat aircraft they still saw extensive and successful service in the bomber role during the April-June 1940 , supporting Norwegian ground troops fighting on the Narvik front. [National Norwegian Aviation Museum website: [http://luftfart.museum.no/Engelsk/Exhibitions/default.htm The Exhibitions] en icon]

The used both C.V-Ds and C.V-Es. One C.V-E was purchased in 1927, with delivery 20 September, and a further 13 were purchased on 17 March 1934, arriving in the winter of 1935. During the , Sweden donated three more C.V-Es. Two C.V-Ds were also flown from Norway to Finland at the closing stages of the Norwegian Campaign. These were interned and turned over to the FAF. The aircraft were used as reconnaissance and light bomber aircraft between 20 September 1927 and 14 February 1945. During the Winter War the Finnish C.Vs flew 151 reconnaissance and harassment bombing sorties without suffering any losses. The saw the C.Vs flying an unknown number of sorties and suffering one aircraft loss. [Backwoods Landing Strip: [http://www.sci.fi/~ambush/faf/fafincolor.html Finnish Air Force aircraft] en icon]

In 1927 the Swedish Air Force purchased two C.V-Ds (J 3) and two C.V-E (S 6) to serve as models for the eventual license manufacturing of the aircraft by . The four aircraft were flown to Sweden in 1928. They proved suitable and an agreement for licence production was made and a further four C.V-E and six C.V-D were purchased,

In 1945 the SwAF sold three S 6s to "Svensk Flygtjänst" to be used for aerial application over forrest. Two other were sold to "Skåneflyg" in 1947. One is preserved and can be seen in the . Lieutenant Einar Lundborg rescued the Italian General in 1928, with a S 6B, equipped with skis. Nobile was on an ice shelf after his airship "Italia" had crashed on its way to the North Pole.

After trials in 1927, Swiss authorities had 48 C.V.-E licence-built in Switzerland for use by the (then the Swiss Army Air Corps). Twenty-four machines were built at and 24 at . The aircraft were in service from 1933 to 1940 and were armed with bombs, two pilot machine guns and a double machine gun for the observer. [Information plaque at the .]

During their the Germans requisitioned a number of Danish Fokker C.V.-Es. Some of these aircraft were used by the Estonian volunteer-manned Nachtschlachtgruppe 11 (Night Ground Attack Wing 11) at in 1944. [Weal 2003, p. 105] NSGr. 11 used its C.V-Es on the Eastern Front to carry out disruptive harassment night bombing sorties against the Russian front lines. These operations were carried out in response to similar nocturnal operations by Soviet light aircraft, such as the Po-2 biplanes. [Weal 2003, p. 64] Two of the C.V-Es of the NSGr. 11 were flown to Sweden in October 1944 by four Estonian defectors, and one of them was handed back to the Danes by the Swedes in 1947. [Weal 2003, p. 125]

*C.IX - strategic reconnaissance variant of C.V-E with engine; five built for Netherlands, one exported to Switzerland