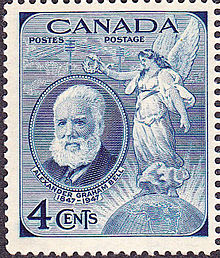 There are several candidates for the title of first commemorative. A 17-cent stamp issued in 1860 by New Brunswick, showing the Prince of Wales in anticipation of his visit is one possibility. [3] One of the most notable examples of the Columbus commemoratives was released when The United States issued its first commemorative stamp in 1893, the $1 Columbian Exposition issue, "Isabella pledging her jewels", one of a set of 16 commemoratives issued to celebrate the 400th anniversary of Christopher Columbus's arrival in the New World in 1492.[1][4] 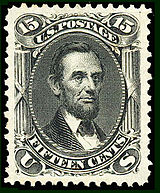 The United States 15-cent black stamp of 1866 depicts Abraham Lincoln, and was the first stamp issued after his assassination in 1865, but it was not officially declared as a memorial to him. The U.S. also issued a 5-cent stamp in 1882 showing the recently murdered President James A. Garfield. In addition, the United States issued stamped envelopes for the Centennial Exposition in 1876, although technically these are postal stationery and not stamps. The British Jubilee Issue of 1887 may be thought of as commemorative of the 50 years' reign of Queen Victoria, although there are no special inscriptions on the stamps, and they were intended as regular stamps. In 1871 Peru issued a 5¢ scarlet Locomotive and Arms stamp and is regarded as the first commemorative postage stamp, issued to commemorate the 20th anniversary of the first railway in South America. [1]

Though the United Kingdom often set the precedence for postage stamps and their designs, they were the late runners with the issue of their first commemorative stamp, not issuing one until 1924 when it printed and released the British Empire Exhibition issue of 1924. [5]

The appearance of commemorative postage stamps caused a backlash among some stamp collectors, in the early years of stamp collecting who balked at the prospect of laying out ever-larger sums to acquire the stamps of the world, so they formed the Society for the Suppression of Speculative Stamps in 1895 to blacklist what they deemed to be excessive stamps. The organization broke up after unsuccessful attempts at getting collectors at large to comply with their wishes. Today the early commemoratives are still prized by collectors.[6][1]