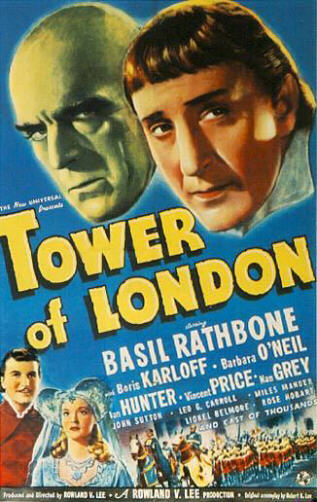 "Tower of London" is a 1939 released by and directed by Rowland V. Lee. Sold to audiences as a in the Universal cycle because of the teaming of and , it is nothing of the kind, although Karloff does play a genuinely creepy character. It stars Rathbone as the future , and Karloff as his fictitious club-footed executioner Mord. appears as the Duke of Clarence. This film is often cited as his first thriller. Actor John Rodion, who appears in a small role, is actually Rodion Rathbone, Basil's son.

The film is based on the traditional depiction of Richard rising to become King of England by eliminating everyone ahead of him. Each time Richard accomplishes a murder, he removes one figurine from a dollhouse resembling a throneroom. Once he has completed his task, he now needs to defeat the exiled to retain the throne.

The plot was not derived from 's "Richard III", but rather was written by Robert N. Lee (director 's brother) after reading a great deal of British history. (one of Richard's brothers) is depicted as something less than the tragically noble figure found in Shakespeare. Ian Hunter portrays , who is not depicted here as the feeble, dying King found in 's 1955 film version of Shakespeare's play.

The film inspired a 1962 remake with Vincent Price now in the lead role. The remake was made on an extremely low budget, was shot in black-and-white with a small cast (and used stock footage from the 1939 version for the battle sequences), and placed far more of an emphasis on genuine horror. Price later told Rathbone's biographer Michael Druxman that he felt Rathbone's performance as Richard was probably more historically genuine than either Laurence Olivier's or his own.