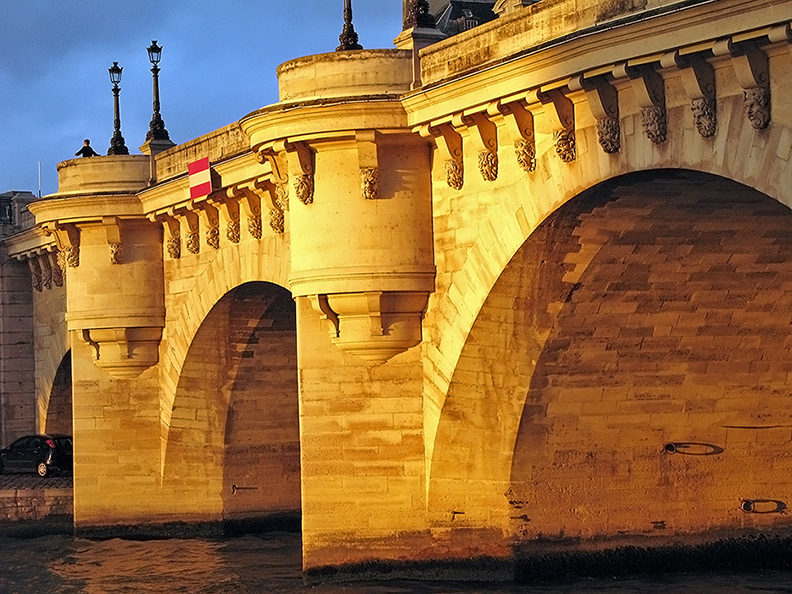 The Pont Neuf, French for the "New Bridge," is the oldest [The fact, and the irony, are standard fare in travel literature; see any guide to Paris. ] standing across the river in . Its name, which distinguished it from the old bridges that were lined on both sides with houses, simply stuck.

Standing by the western point of the , the island in the middle of the river that was the heart of medieval Paris, it connects the left bank, the "" of Paris with the "", the right bank.

The bridge is actually composed of two separate spans, one of five arches joining the left bank to the Île de la Cité, another of seven joining the island to the right bank. Old engraved maps of Paris show how, when the bridge was built, it just grazed the downstream tip of the Île de la Cité; since then, the natural sandbar building of a mid-river island, aided by stone-faced embankments called "s", has extended the island, which is planted as the Parc Vert Gallant, in honour of Henry IV, the "Green Gallant" King.

As early as 1550, Henry II was asked to build a bridge here because the existing was overloaded, but the expense was too much at the time.

In 1577, the decision to build the bridge was made by King Henri III who laid its first stone in 1578, during which year the foundations of four piers and one abutment were completed. A major design change was made in 1579 requiring the widening of the bridge to allow houses to be built, though they never were, made the piers on the long arm longer. These piers were built over the next nine years. After a long delay beginning in 1588, due in part to the , construction was resumed in 1599. The bridge was completed under the reign of Henri IV, who inaugurated it in 1607.

Pont Neuf is constructed as a series of many short s, as most bridges of that time were built, following Roman precedents. Unlike the old bridges, it was the first stone bridge in Paris not to support houses in addition to a thoroughfare, and was also fitted with pavements protecting pedestrians from mud and horses; pedestrians could also step aside into its s to let a bulky carriage pass.

The bridge had heavy traffic from the beginning;

A major restoration of the Pont Neuf was begun in 1994 and was completed in 2007, the year of its 400th anniversary.

Under the wide arches, on the paved s, the destitute of Paris called "clochards" have always huddled.Clarifyme|date=March 2008

The equestrian statue of Henri IV

At the point where the bridge crosses the , there stands a bronze of , originally commissioned from under the orders of , Henri’s widow and Regent of France, in . After his death, Giambologna's assistant completed the statue, which was erected on its pedestal by , in . It was destroyed in during the , but was rebuilt in , following the restoration of the Bourbon monarchy. Bronze for the new statue was obtained with the bronze from a statue of and cast from a mold made using a surviving cast of the original. Inside the statue, the new sculptor put four boxes, containing a history of the life of , a 17th-century parchment certifying the original statue, a document describing how the new statue was commissioned, and a list of people who contributed to a public subscription.

The last Grand Master of the was burned at the stake on the near the Pont Neuf, on . The execution was ordered by Philippe le Bel (Philip the Fair) after Jacques retracted all of his previous confessions, which outraged the French king.