Pedro VI redirects here. There was also a Pedro VI of Kongo. 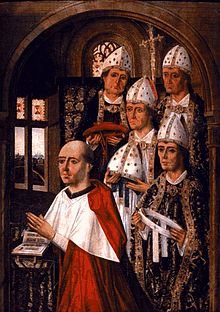 Cardinal Pedro González de Mendoza, (1428 - 1495), around 1484, cadet brother as a 4th male child of the (since 1458), 2nd marquis of Santillana, 2nd count of Manzanares el Real, Diego Hurtado de Mendoza, 1. duque of l'Infantado, a ducal title of 1475. Both were born to Spanish nobleman and distinguished Poet Íñigo López de Mendoza, (1390 - 1458), 1st marquis of Santillana. The 2nd, 4th, and 5th (grand son of the 4th) dukes of Infantado beared the name Íñigo López de Mendoza, to honor earlier ancestors, including the poet, while the 1st, 3rd and the one supposed to be the 5th but who died before his father the 4th, received the name Diego Hurtado de Mendoza as poet Iñigo father, by a second marriage, Diego, Admiral of Castile, deceased in 1404. They recognized thus, themselves, as "Basques" from Castile, as the former "Basque" Lords of Biscay had done in the Castilian kingdom, whereby a López de Haro was succeeded by his eldest son named however as a Díaz de Haro and then, the following Lord of Biscay, being described again as a López de Haro in spite of his father being known, politically speaking, as a "Díaz de Haro" and so on and on for some 3 centuries or so, alternating the family name, a genealogical fact ignored today by many Basque, and Castilian, people

He was born at Guadalajara in New Castile, the chief lordship of his family. He was the fourth son of Íñigo López de Mendoza, marqués de Santillana, deceased 1458, and one of the cadet brothers of Diego Hurtado de Mendoza, 1. duque of l'Infantado, deceased 1479.

The house of Mendoza claimed to descend from the lords of Llodio in Alava, and to have been settled in Old Castile, in the 11th century.[1] One chief of the house had been greatly distinguished at the battle of Las Navas de Tolosa in 1212. Another, Diego Hurtado de Mendoza, his grandfather, (circa 1365 - 1404), had been Admiral of Castile in the reign of Henry III of Castile "The Infirm".

King Pedro I of Castile, assassinated March 1369, had endowed his great grandfather Pedro González de Mendoza, killed at the Battle of Aljubarrota in 1385, with the lordships of Hita in the province of Guadalajara, and Buitrago.

The road to greatness of the Mendozas was completed by this earlier Pedro Gonzalez de Mendoza, who sacrificed his life to save John I of Castile at the battle of Aljubarrota in 1385. The cardinal's and the 1st duke of Infantado father, Íñigo López de Mendoza, 1st marquis of Santillana-- to use the title he was awarded in the last years of his life --, was a poet, and was conspicuous during the troubled reign of John II of Castile, deceased 1453.

Loyalty to the Crown was the traditional and prevailing policy of the Mendoza family. Pedro González de Mendoza, named thus by his father Íñigo to name him as the one killed by the Portuguese troops at Aljubarrota, the future cardinal, was sent into the Church mainly because he was a younger son and that he might be handsomely provided for. He had no vocation, and was an example of the worldly, political and martial prelates of the 15th century.

In 1452 at the age of twenty-four, he was chosen by the king John II to be bishop of Calahorra, but did not receive the pope's bull till 1454. As bishop of Calahorra he was also señor, or civil and military ruler, of the town and its dependent district. In his secular capacity he led the levies of Calahorra in the civil wars of the reign of Henry IV. He fought for the king at the second battle of Olmedo on August 20, 1467, and was wounded in the arm.

During these years he became attached to Mencia de Lemos, a Portuguese lady-in-waiting of the Consort queen, a Portuguese princess. She bore him two sons, Rodrigo Diaz de Vivar Mendoza , who was once selected to be the husband of Lucrezia Borgia, and another, who was named Diego Hurtado de Mendoza, 1st Count of Melito in Italy, not to be confounded with other people mentioned also above and who was the grandfather of the princess of Eboli of the reign of Philip II of Spain (see Antonio Perez).

By Inés de Tovar, a lady of a Valladolid family, he had a third son (Juan Hurtado de Mendoza y Tovar) who afterwards emigrated to France.

In 1468 Pedro became Bishop of Sigüenza. In 1473 he was created cardinal, was promoted to the archbishopric of Seville and named chancellor of Castile. During the last years of the reign of King Henry IV. he was the partisan of the Princess Isabella, afterwards queen, while his eldest brother Diego Hurtado de Mendoza, 2nd marquis of Santillana, remained however faithful to king Henry IV of Castile, till his rather controverted death in December 1474.

Pedro, the cadet brother, fought for her at the Battle of Toro on March 1, 1476 when her oldest half brother, the king Henry IV, had died already. He had a prominent part in placing her on the throne; and served her indefatigably in her efforts to suppress the disorderly nobles of Castile. In 1482 he became Archbishop of Toledo.

This transfer of loyalties of the oldest brother and head of the whole family, Diego, after Henry's death in December 1474, was duly rewarded by Queen Isabella I of Castile, Queen successor since December 1474 awarding Diego the title of Duke of the Infantado or Duke of l'Infantado on 22 July 1475. The title would be awarded the Grandee of Spain in 1519 by king Charles I of Spain, a.k.a. Holy Roman Emperor Charles V.

During the conquest of Granada he contributed largely to the maintenance of the army. On January 2, 1492 he occupied the town in the name of the Catholic sovereigns. Though his life was worldly, and though he was more soldier and statesman than priest, the "Great Cardinal", as he was commonly called, did not neglect his duty as a bishop. He used his influence with the queen and also at Rome to arrange a settlement of the disputes between the Spanish sovereigns and the papacy. He was an advocate of Christopher Columbus.[2]

Though he maintained a splendid household as archbishop of Toledo, and, provided handsomely for his children, he devoted part of his revenue to charity, and with part he endowed the college of Santa Cruz at Valladolid University. His health broke down at the close of 1493.

Queen Isabella visited and nursed him on his deathbed in Guadalajara. It is said that he recommended her to choose as his successor the Franciscan Jimenez de Cisneros, a man who had no likeness to himself save in political faculty and devotion to the authority of the Crown.