The flag of Switzerland consists of a red flag with a white cross (a bold, equilateral cross) in the centre. It is one of only two square sovereign-state flags, the other being the flag of the Vatican City. (The civil and state ensign, used by Swiss ships and boats, has more the more common proportions of 2:3.)[1]

Only the dimensions of the cross are formally established since 1889: "The coat of arms of the federation is, within a red field, an upright white cross, whose [four] arms of equal length are a sixth longer than their width."[2] The size of the cross in relation to the field is not formally established except on the naval ensign, for which the ratio of the size of the cross to the height is 5:8, and to the length is 5:12.[3] A ratio of 2:3 or 7:10 to the span of the flag is usual.[citation needed]

Use of the white cross as a military ensign (attached to the cantonal flags in the form of strips of linen) has been used in the Old Swiss Confederacy since the 14th century, but the modern design of a white cross suspended in a square red field was introduced only during the Napoleonic period, first used in 1800 during the Hundred Days by general Niklaus Franz von Bachmann, and was introduced as official national flag in 1889.

Ten cantonal war flags carried in the Battle of Nancy (1477) in the depiction of the Luzerner Chronik of 1513. All flags of the Eight Cantons are shown, but the flags of Berne and Uri omit the heraldic animal, showing only the cantonal colours. In addition, the flags of Fribourg and Solothurn are shown, at the time not yet full members, who would join the confederacy in the aftermath of this battle. Each flag has the confederate cross attached.

The ultimate origin of the white cross is attributed by three competing legends: To the Theban Legion, to the Reichssturmfahne (Imperial War Banner) attested from the 12th century, and to the Arma Christi that were especially venerated in the three forest cantons, and which they were allegedly allowed to display on the formerly uniformly red battle flag from 1289 by king Rudolph I of Habsburg at the occasion of a campaign to Besançon.

Use of a white cross as a mark of identification of the combined troops of the Old Swiss Confederacy is first attested in the Battle of Laupen (1339), where it was sewn on combatants' clothing as two stripes of textile, contrasting with the red St. George's cross of Habsburg Austria, and with the St. Andrew's cross used by Burgundy and Maximilian I. The first flag used as a field sign representing the confederacy rather than the individual cantons may have been used in the Battle of Arbedo in 1422 (notably without the participation of Schwyz). This was a triangular red flag with an elongated white cross.

The white cross was thus in origin a field mark attached to combattants for identification, and later also to cantonal flags. The Lucerne chronicle of 1513, in battle scenes of the Burgundy wars of the 1470s shows cantonal flags with an added white cross. In this context, the solid-red war flag of Schwyz with the addition of the white cross appears much like the later flag of Switzerland. Other depictions in the illustrated chronicles show a flag of Schwyz with an asymmetrical white cross, drawn in greater detail, including the body of Christ. The symbol of the confederation as it developed during 1450-1520 was thus the white cross itself, not necessarily in a red field, but attached to existing flags, so that it appeared before a red background in those cantonal flags that contained red, notably the solid-red flag of Schwyz. 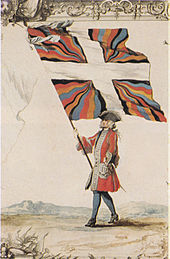 Depiction of a member of the Swiss Guard in France with a flammé flag, showing the French regimental white cross before a background of black, red, blue and yellow flame designs

Because of the Swiss pledge of neutrality, there was no military conflict in which the Swiss confederate troops participated after 1540. Consequently, the confederate field sign fell out of use. The cross is still shown as a symbol of the Swiss Confederacy on the Patenmedallie cast by Hans Jakob Stampfer and given by the Confederacy as a baptismal gift to Princess Claude of France in 1547, but symbolic depictions of the Confederacy in the 17th century do without the federal cross.

But beginning in the later 16th century, forces of the individual cantons adopted a type of flag which was based on a white cross design. These flags usually showed a white cross drawn to the edge of the field in front of a background striped in the respective cantonal colours. From this type, the flammé military flag develops in the 17th century, which also came to be used by Swiss mercenary regiments by the end of the 17th century. The flammé design remained popular for military flags of the 18th and 19th centuries. A flammé flag was introduced as ordonnance for the Bernese troops in 1703.

Flag of the Helvetic Republic 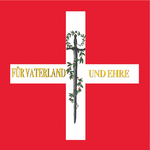 The first Swiss battalion flag, issued by the Tagsatzung on 12 October 1815, after the design of general Niklaus Franz von Bachmann. 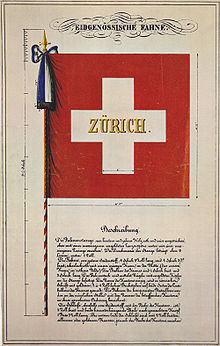 Final design for the flag used by cantonal troops under federal command (deployed by the Tagsatzung) in the Restoration period, by Carl Stauffer (1841). The specifications include the flag pole and the ribbon with the cantonal colours attached to the pole (the example depicted is the flag of the Zürich battalion). The flag itself is described as of good silk cloth, four feet five inches squared, scarlet, in the center a white cross, arms measuring one foot by three feet

After the invasion of 1798, the authorities of the Helvetic Republic confiscated all earlier flags, replacing them with the new green-red-yellow tricolore. The flag's usage did not last for long. The Tagsatzung re-introduced the white cross in the red field for the coat of arms, seal and flag of the Confederacy in 1814.

General Niklaus Franz von Bachmann used the white cross in a red field his campaigns of 1800 and 1815. The federal treaty of 1815 introduced design with the cross suspended in the field without touching the edges, surrounded by the cantonal coats of arms, as the seal of the Confederacy.

Officially, the flag remained purely a military ensign until after the foundation of Switzerland as a federal state in 1848. However, the flag became increasingly used by private organizations during the Regeneration period (1830s), especially shooting, singing and gymnastics associations which at the time were a pool for progressive or "radical" agitation. The canton of Aargau introduced the flag for its troops in 1833, and general Guillaume-Henri Dufour proposed use of the flag for all federal forces in 1840. The Tagsatzung passed a resolution to introduce the flag design with the suspended cross on 21 July 1840, and a final design was fixed in 1841.

The Swiss constitution of 1848 did not name a national flag, but it prescribes the federal flag for all federal troops. The last flammé flags still used by Landwehr units were replaced by the modern design in 1865. The flag was finally introduced as the national flag on December 12, 1889, when the Federal Council defined the 1/6 proportion of the cross's members, while the ratio of the cross to the square field, or the shield in the case of the coat of arms, remained unspecified.

The rectangular variant of the flag is used as a naval ensign only, officially introduced with a federal law passed 23 September 1953.

The flag is flown around the year from private and commercial buildings as a display of patriotism, particularly in rural areas and often together with the cantonal and municipal flag. On Swiss National Day, August 1, the streets and buildings are traditionally festooned in celebration with Swiss flags and banners.

Prominent display of the Swiss flag on clothing and apparel has become more frequent with the "Swissness" fashion trend in the first decade of the 21st century, while such use of the flag had previously been largely limited to conservative and right-wing circles. The flag and coat of arms are also often used (frequently in contravention of federal law, see below) as design elements on merchandise, particularly on high-quality goods or on merchandise aimed at tourists; for example, the emblems of Victorinox and Wenger, manufacturers of Swiss Army knives and the sole purveyors of these knives to the Swiss army, are based on the Swiss coat of arms.

The display of the flag on federal, cantonal and municipal public buildings follows no uniform pattern or regulation. Many public buildings are equipped with flag posts (most often one each for the federal, cantonal and municipal flag), but the flag(s) may only be flown during part of the year or only on National Day. In Bern, the flag is flown on the cupola of the Federal Palace while the Federal Assembly is in session.

Flag of the Red Cross

Destruction, removal or desecration of a Swiss, cantonal or municipal flag or coat of arms that has been installed by a public authority is punishable by a monetary penalty or imprisonment of up to three years according to the federal penal code.[4] The destruction or desecration of privately owned flags is legal.

The use of the Swiss flag or coat of arms on merchandise is technically prohibited by the 1931 Federal Act for the protection of public coats of arms and other public insignia,[5] but that prohibition is not enforced.

The red background of the Swiss flag is not defined by law and various government bodies have used sundry shades throughout the country's history. In 2007 the federal corporate design guide designated Pantone's CMYK value of PMS 485 (both magenta and yellow at 100 percent) for use in printing, which is a subtractive colour process. The guide further designated a hexadecimal RGB colour value of #FF0000 for use on the Web, which is displayed mostly through additive colour devices such as computer monitors.[6] The Web hue cannot be produced through standard CMYK process colour printing.

The Red Cross symbol used by the International Committee of the Red Cross, a red cross on white background, was the original protection symbol declared at the first Geneva Convention, the Convention for the Amelioration of the Condition of the Wounded in Armies in the Field of 1864. According to the ICRC the design was based on the Swiss flag by reversing of the colours of that flag, in order to honor Switzerland, where the first Geneva Convention was held. However, no historic record has been found of an association of the Red Cross emblem with the flag of Switzerland earlier than 1906. The flag of the Colombian town of Santa Cruz de Mompox is also very similar to the Swiss flag.