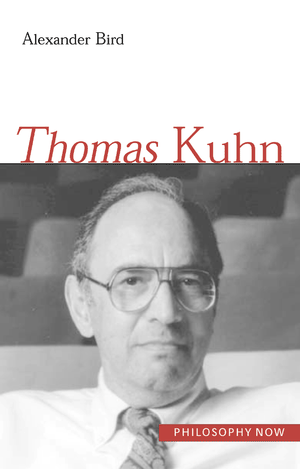 Thomas Samuel Kuhn (surname pronEng|ˈkuːn; , &ndash; , ) was an American intellectual who wrote extensively on the and developed several important notions in the .

Thomas Kuhn was born in to Samuel L. Kuhn, an industrial engineer, and Minette Stroock Kuhn. He obtained his bachelor's degree in from in 1943, and master's and Ph.D in physics in 1946 and 1949, respectively. He later taught a course in the history of science at Harvard from 1948 until 1956 at the suggestion of university president James Conant. After leaving Harvard, Kuhn taught at the , in both the philosophy department and the history department, being named Professor of the History of Science in 1961. At Berkeley, he wrote and published (in 1962) his best known and most influential work: [cite |author=Alexander Bird |title= Thomas Kuhn|publisher= Stanford Encyclopedia of Philosophy|date= 2004 http://plato.stanford.edu/entries/thomas-kuhn/] "". In 1964, he joined as the M. Taylor Pyne Professor of Philosophy and History of Science. In 1979, he joined the (MIT) as the Laurance S. Rockefeller Professor of Philosophy, remaining there until 1991. Kuhn interviewed and taped Danish physicist the day before Bohr's death. The recording contains the last words of Niels Bohr caught on tape.Fact|date=July 2008 In 1994, he was diagnosed with of the , of which he died in 1996.

Kuhn was married twice, first to Kathryn Muhs (with whom he had three children) and later to Jehane Barton (Jehane R. Kuhn).

"The Structure of Scientific Revolutions"

In "The Structure of Scientific Revolutions" ("SSR"), Kuhn argued that science does not progress via a linear accumulation of new knowledge, but undergoes periodic revolutions, also called "s" (although he did not coin the phrase), [ cite journal
last=Horgan
first=John
title=Profile: Reluctant Revolutionary
journal=Scientific American
date=May 1991
pages=40] in which the nature of scientific inquiry within a particular field is abruptly transformed. In general, science is broken up into three distinct stages. Prescience, which lacks a central paradigm, comes first. This is followed by "", when scientists attempt to enlarge the central paradigm by "puzzle-solving". Thus, the failure of a result to conform to the paradigm is seen not as refuting the paradigm, but as the mistake of the researcher, contra Popper's refutability criterion. As anomalous results build up, science reaches a "crisis", at which point a new paradigm, which subsumes the old results along with the anomalous results into one framework, is accepted. This is termed "revolutionary science".

In "SSR", Kuhn also argues that rival paradigms are incommensurable&mdash;that is, it is not possible to understand one paradigm through the conceptual framework and terminology of another rival paradigm. For many critics, for example ("", 1982), this thesis seemed to entail that theory choice is fundamentally : if rival theories cannot be directly compared, then one cannot make a rational choice as to which one is better. Whether or not Kuhn's views had such relativistic consequences is the subject of much debate; Kuhn himself denied the accusation of relativism in the third edition of "SSR", and sought to clarify his views to avoid further misinterpretation. has quoted Kuhn as saying "I am not a Kuhnian!", [cite book
last=Dyson
first=Freeman
title=The Sun, the Genome, and the Internet: Tools of Scientific Revolutions
date=,
publisher=Oxford University Press, Inc.
pages=144
isbn=978-0195129427] referring to the that some philosophers have developed based on his work.

The book was originally printed as an article in the "", published by the logical positivists of the .

The enormous impact of Kuhn's work can be measured in the changes it brought about in the vocabulary of the philosophy of science: besides "paradigm shift", Kuhn raised the word "" itself from a term used in certain forms of to its current broader meaning, coined the term "" to refer to the relatively routine, day-to-day work of scientists working within a paradigm, and was largely responsible for the use of the term "scientific revolutions" in the plural, taking place at widely different periods of time and in different disciplines, as opposed to a single "Scientific Revolution" in the late . The frequent use of the phrase "paradigm shift" has made scientists more aware of and in many cases more receptive to paradigm changes, so that Kuhn’s analysis of the evolution of scientific views has by itself influenced that evolution.Fact|date=February 2008

Kuhn's work has been extensively used in social science; for instance, in the / debate within . Kuhn is credited as a foundational force behind the post-Mertonian .

A defense Kuhn gives against the objection that his account of science from "The Structure of Scientific Revolutions" results in relativism can be found in an essay by Kuhn called "Objectivity, Value Judgment, and Theory Choice." [cite book
last=Kuhn
first=Thomas
title=The Essential Tension: Selected Studies in Scientific Tradition and Change
date=1977
publisher=University of Chicago Press
pages=320-39] In this essay, he reiteriates five criteria from the penultimate chapter of "SSR" that determine (or help determine, more properly) theory choice:
1 - "Accurate" - empirically adequate with experimentation and observation
2 - "Consistent" - internally consistent, but also externally consistent with other theories
3 - "Broad Scope" - a theory's consequencies should extend beyond that which it was initially designed to explain
4 - "Simple" - the simplest explanation, principally similar to Occam's Razor
5 - "Fruitful" - a theory should disclose new phenomena or new relationships among phenomena

Scientific historians and scholars have noted similarities between Kuhn's work and the work of . Although they used different terminologies, both scientists believed that scientists' subjective experiences made science a relativistic discipline. Polanyi lectured on this topic for decades before Kuhn published "The Structure of Scientific Revolutions."

Supporters of Polanyi charged Kuhn with plagiarism, as it was known that Kuhn attended several of Polanyi's lectures, and that the two men had debated endlessly over the epistemology of science before either had achieved fame. In response to these critics, Kuhn cited Polanyi in the second edition of "The Structure of Scientific Revolutions," and the two scientists agreed to set aside their differences in the hopes of enlightening the world to the dynamic nature of science. Despite this intellectual alliance, Polanyi's work was constantly interpreted by others within the framework of Kuhn's paradigm shifts, much to Polanyi's (and Kuhn's) dismay. [Moleski, Martin X. "Polanyi vs. Kuhn: Worldviews Apart." The Polanyi Society. Missouri Western State University. Accessed 20 March 2008. http://www.missouriwestern.edu/orgs/polanyi/TAD%20WEB%20ARCHIVE/TAD33-2/TAD33-2-fnl-pg8-24-pdf.pdf]

Kuhn was named a Guggenheim Fellow in 1954, and in 1982 was awarded the by the . He was also awarded numerous honorary doctorates.