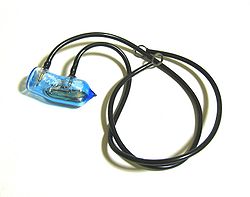 A mercury switch (also known as a mercury tilt switch) is a switch whose purpose is to allow or interrupt the flow of electric current in an electrical circuit in a manner that is dependent on the switch's physical position or alignment relative to the direction of the "pull" of earth's gravity, or other inertia.

Mercury switches consist of one or more sets of electrical contacts in a sealed glass envelope which contains a bead of mercury. The envelope may also contain air, an inert gas, or a vacuum. Gravity is constantly pulling the drop of mercury to the lowest point in the envelope. When the switch is tilted in the appropriate direction, the mercury touches a set of contacts, thus completing the electrical circuit through those contacts. Tilting the switch the opposite direction causes the mercury to move away from that set of contacts, thus breaking that circuit.[1] The switch may contain multiple sets of contacts, closing different sets at different angles allowing, for example, Single-Pole, Double-Throw (SPDT) operation.

Advantages of the mercury switch over other types are that the contacts are enclosed, so oxidation of the contact points is unlikely; in hazardous locations, interrupting the circuit will not emit a spark that can ignite flammable gasses. Contacts stay clean, and even if an internal arc is produced, the contact surfaces are renewed on every operation, so the contacts don't wear out. Even a small drop of mercury has a low resistance, so switches can carry useful amounts of current in a small size.[2] The sensitivity of the drop to gravity provides a unique sensing function, and lends itself to simple, low-force mechanisms for manual or automatic operation. The switches are quiet as there are no contacts that abruptly snap together. The mass of the moving mercury drop can provide an "over center" effect to avoid chattering as the switch is tilted. Multiple contacts can be included in the envelope for two or more circuits.

Disadvantages when compared with other types include: Mercury switches have a relatively slow operating rate due to the inertia of the mercury drop, so they are not used when many operating cycles are required per second.[3] Mercury switches are sensitive to gravity so may be unsuitable in portable or mobile devices that can change orientation or that vibrate. Mercury compounds are highly toxic and accumulate in any food chain, so mercury is not permitted in many new designs. Glass envelopes and wire electrodes may be fragile and require flexible leads to prevent damaging the envelope. The mercury drop forms a common electrode, so circuits are not reliably isolated from each other if a multipole switch is used.

Tilt switches may be used for a rollover or tip over warning for construction equipment and lift vehicles operating in rugged off-highway terrain. There are several non-mercury types but few are implemented due to sensitivity to shock and vibration - causing false tripping. However devices resistant to this do exist.

Mercury switches were used in automobiles for lighting controls (for example, trunk lid lights), ride control, and Antilock braking control systems. Scrapped automobiles can leak mercury to the environment if these switches are not properly removed. These uses have been discontinued in new American-built cars since 2003.[4][5]

Work performed in confined space (such as a welder inside a tank) has special labor safety requirements. Tilt switches are used to sound an alarm if a worker falls over.

Mercury switches were commonly used in bimetal thermostats. The weight of the movable mercury drop provided some hysteresis by moving the bimetal spring slightly beyond the point it would normally assume, thereby holding the thermostat off slightly longer before flipping to the on state and then holding the thermostat on slightly longer before flipping back to the off state. The mercury also provided a very positive on/off switching action and could withstand millions of cycles without degradation of the contacts.

Mercury switches are still used in mechanical systems that are controlled electrically where the physical orientation of actuators or rotors is a factor. They are also commonly used in vending machines that have 'tilt alarms'. When the machine is rocked or tilted in an attempt to gain a product, the mercury switch activates, sounding an alarm.

A tilt switch can be used to trigger a bomb.[6][7] Mercury tilt switches can be found in some bomb and landmine fuzes, typically in the form of anti-handling devices, for example, a variant of the VS-50 mine.

Since mercury is a poisonous heavy metal, devices containing mercury switches must be treated as hazardous waste for disposal. Because it is now RoHS restricted, it has been eliminated in most modern applications. A metal ball and contact wires can directly replace it, yet switch bounce reduction may be necessary. Low-precision thermostats simply use a bimetal strip and a switch contact; precision thermostats use a thermistor or silicon temperature sensor. Low-cost accelerometers replace the mercury tilt switch in precision applications.