Gorna Oryahovitsa (Bulgarian: Горна Оряховица) is a town in northern Bulgaria, situated in Veliko Tarnovo Province, not far from the city of Veliko Tarnovo. It is the administrative centre of the homonymous Gorna Oryahovitsa Municipality. As of December 2009, the town has a population of 32,436 inhabitants.[1][2][3]

The nearby village of Arbanasi is an architectural reserve with a large number of historical monuments, such as medieval churches and examples of the Bulgarian National Revival architecture.

The first settlement in the area dates back to the second half of the 5th millennium BC (Middle Neolithic Age). There are traces of a later Thracian settlement between the Kamaka (The Stone) Hill and the Arbanasi Plateau. Its inhabitants were from the tribe of Krobizi. They erected the Kamaka Fortress that existed from the 5th century BC to the 1st century BC, when the Romans built up their own fortified settlement over its ruins. It gradually acquired economic power mainly through cultivating grapes and producing wine. The life of that settlement continued up to the coming of the Slavs (6th-7th century). There is no substantial evidence of settled life between the 7th and the 12th century.

After the restoration of the Bulgarian State at the end of the 12th century, a need arose for protection of the new metropolis Tarnovgrad. Several fortresses were built, including Rahovets (4 km northwest of the modern town). The main purpose of the strongholds was to protect the roads leading to the Bulgarian capital Tarnovgrad. The name Rahovets means 'road fortress' (from Persian rah, meaning 'road'). The medieval fortress gave its name to the modern town, even though with some Slavic twist.

During the Ottoman invasion the fortress was conquered by the Ottomans after its water pipeline was cut off (without destroying the fortress). Rahovets existed up to the year 1444 when King Władysław Warneńczyk during his campaign against the Ottomans destroyed it. Three individual small villages existed during the first centuries of Ottoman rule there — Mala (Little), Sredna (Middle) and Golyama (Greater) Rahovitsa.

During the Bulgarian National Revival Gorna Oryahovitsa gradually turned into an economically strong settlement. Crafts prospered and trade was among the most active in Northern Bulgaria. Every Friday there was a big market for cattle, agricultural production, timber, and charcoal. As early as 1822 a monastery school was opened here and in 1827 a private school that became public in 1835 began functioning. In 1850 the first girls' school opened gates and in 1859 the first intermediate high school was founded. A chitalishte (library and community centre) was opened in 1869. Gorna Oryahovitsa was proclaimed a town in 1870, when it numbered 4,700 inhabitants and had 1,200 houses and 5 churches.

The population of the town took part in the struggle for national liberation. Vasil Levski organised a revolutionary committee in Gorna Oryahovitsa during the first half of 1869 and later visited the town two more times. During the preparation of the April Uprising Gorna Oryahovitsa was designated as a centre of the First Revolutionary District with Stefan Stambolov as Chief Apostle. After the failure of the April Uprising, Georgi Izmirliev "Makedoncheto" (the Macedonian), one of the local leaders, was hanged in the centre of Gorna Oryahovitsa. His last words were: "How good it is to die for the freedom of the Fatherland!". Three citizens of Gorna Oryahovitsa fought in Hristo Botev's detachment of armed volunteers and 132 people joined the Bulgarian volunteer forces during the Russo-Turkish War of Liberation. The Imperial Russian Army liberated Gorna Oryahovitsa from Ottoman rule on 26 June 1877.

After the Liberation the town developed as a significant transport (predominantly railway) centre as it is nowadays. Its proximity with the old metropolitan town of Veliko Tarnovo, tourist centre Arbanasi, the monasteries around and a great number of other sites of interest makes it a known tourist destination.

Gorna Oryahovitsa is an important producer of sugar and sugar products in Bulgaria. Apart from the major sugar factory Sugar Plants Ltd. the town also has numerous smaller firms producing sweets and pastries.

During the last 15 years Gorna Oryahovitsa has been developing an intensive festive activity. Some of the major yearly events are:

The town has a well-developed sport centre as the major sports practiced are: 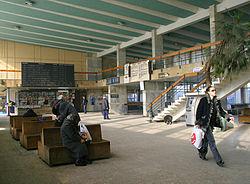 Gorna Oryahovitsa is a major railway junction in northern Bulgaria. In the town is one of the six international airports in Bulgaria - Gorna Oryahovitsa Airport, with flight to or from Sofia taking about 30 minutes.