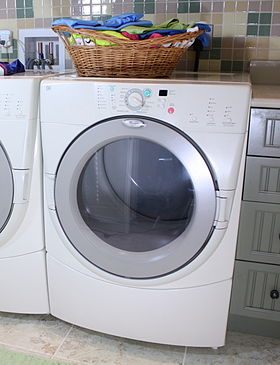 A clothes dryer or tumble dryer is a household appliance that is used to remove moisture from a load of clothing and other textiles, generally shortly after they are cleaned in a washing machine.

Most dryers consist of a rotating drum called a tumbler through which heated air is circulated to evaporate the moisture from the load. The tumbler is rotated to maintain space between the articles in the load.

Using these machines may cause clothes to shrink, become less soft (due to loss of short soft fibres/ lint). For these reasons, as well as to save energy, many people use open air methods such as a clothes line and clotheshorse.

Traditional dryers continuously draw in the cool, dry, ambient air around them and heat it before passing it through the tumbler. The resulting hot, humid air is usually vented outside to make room for more dry air to continue the drying process. This design makes no effort to recycle the heat put into the load, and thus is considered environmentally detrimental. Nevertheless, this design is simple, reliable, and cheap, and widely used as a result.

Improvised methods of salvaging this heat for in-home heating, by use of inline vent boxes equipped with a flapper valve to direct heat to indoor areas, will increase humidity within a dwelling. Humidity from these devices increases likelihood of mold, mildew, and bacterial growth inside a home. Indoor venting may also be against local regulations. Gas dryers must be vented outdoors, as the products of combustion are vented along with the moist air. Building codes and manufacturers' instructions recommended that dryers vent outdoors. An indoor lint trap kit poses a similar concern of increased humidity within the dwelling. 'Long run' dryers have an additional fan inside to boost the exiting moist air through longer sections of vent pipe, as in apartments or dwellings where the vent cannot make a direct connection from the dryer to the outside[1].

The Japanese[who?] have developed highly efficient clothes dryers that use microwaves to dry the clothes. Most of the drying is done using microwaves to evaporate the water, but the final drying is done by convection heating to avoid problems of arcing with metal pieces in the laundry. There are a number of advantages: shorter drying times (25% less),[1] energy savings (17-25% less), lower drying temperatures. The problem of arcing and fabric damage must be definitively addressed before microwave dryers can be developed for the US market.[2] 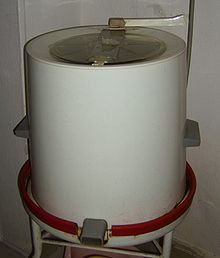 These machines simply spin their drums faster than a typical washer could, in order to extract additional water from the load. They may remove more water in two minutes than a heated tumbler dryer can in twenty, thus saving significant amounts of time and energy. Although spinning alone will not completely dry clothing, this additional step saves a worthwhile amount of time and energy for large laundry operations such as those of hospitals.

In some cases, dryers may use spin alone. Larger gyms and swimming pools may have small spin dryers for the convenience of exiting patrons. Extracting much of the water from a swimsuit means fewer problems in gym bags and later, laundry hampers. Full drying is not necessary, as the patron typically launders the swimsuit soon after.

Just as in a normal dryer, condenser dryers pass heated air through the load. However, instead of exhausting this air, the dryer uses a heat exchanger to cool the air and condense the water vapor into either a drain pipe or a collection tank. This air is run through the loop again. The heat exchanger typically uses ambient air as its coolant, therefore the heat produced by the dryer will go into the immediate surroundings instead of the outside, increasing the room temperature. In some designs, cold water is used in the heat exchanger, eliminating this heating, but requiring increased water usage.

In terms of energy use, condenser dryers typically require less system-wide energy use than conventional dryers. Energy saving results from the HVAC system not having to heat or cool additional air to replace that exhausted by a traditional dryer. Typically this savings is sufficient to offset the increase in power draw, longer drying times, and ambient cooling requirements associated with condensation dryers.[3]

Because the heat exchange process simply cools the internal air using ambient air (or cold water in some cases), it will not dry the air in the internal loop to as low a level of humidity as the fresh, ambient air. As a consequence of the increased humidity of the air used to dry the load, this type of dryer requires somewhat more time than a traditional dryer. Condenser dryers are a particularly attractive option where long, intricate ducting would be required to vent a traditional dryer. 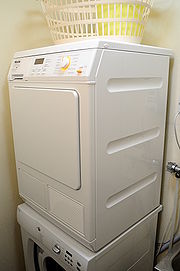 A closed cycle heat pump clothes dryer, using a heat pump to dehumidify the process air. Such dryers typically use less than half the energy per load of a condenser dryer.

Whereas condensation dryers use a passive heat exchanger cooled by ambient air, these dryers use a heat pump. The hot, humid air from the tumbler is passed through a heat pump where the cold side condenses the water vapor into either a drain pipe or a collection tank and the hot side reheats the air. In this way not only does the dryer avoid the need for ducting, but it also conserves much of its heat within the dryer instead of exhausting it into the surroundings. Heat pump dryers can therefore use less than half the energy required by either condensation or traditional dryers.[citation needed]

As with condensation dryers, the heat exchanger will not dry the internal air to as low a level of humidity as the ambient air. With respect to ambient air, the higher humidity of the air used to dry the clothes has the effect of increasing drying times; however, because heat pump dryers conserve much of the heat of the air they use, the already-hot air can be cycled more quickly, possibly leading to shorter drying times than traditional dryers, depending on the model.

A new type of dryer in development, these machines are a more advanced version of heat pump dryers. Instead of using hot air to dry the clothing, mechanical steam compression dryers use water recovered from the clothing in the form of steam. First, the tumbler and its contents are heated to 100 °C. The wet steam that results purges the system of air and is the only remaining atmosphere in the tumbler.

As wet steam exits the tumbler, it is mechanically compressed (hence the name) to extract water vapor and transfer the heat of vaporization to the remaining gaseous steam. This pressurized, gaseous steam is then allowed to expand and is superheated before being injected back into the tumbler where its heat causes more water to vaporize from the clothing, creating more wet steam and restarting the cycle.

Marketed by some manufacturers as a "static clothes drying technique", convectant dryers simply consist of a heating unit at the bottom, a vertical chamber, and a vent at top. The unit heats air at the bottom, reducing its relative humidity, and the natural tendency of hot air to rise brings this low-humidity air into contact with the clothes. This design is slow and relatively energy-efficient, but is only marginally faster than line-drying.

The solar dryer is a box-shaped static construction which encloses a second compartment where the clothes are held. It uses the sun's heat without direct sunlight reaching the clothes. Alternatively, a solar heating box may be used to heat air that is driven through a conventional tumbler dryer.

Clothes dryers can cause static cling, through the triboelectric effect.

A hand-cranked clothes dryer was created in 1800 by M. Pochon from France.[5] Electric tumble dryers appeared in the early 20th century. Industrial designer Brooks Stevens developed the first electric dryer with a glass window in the 1940s.[6] 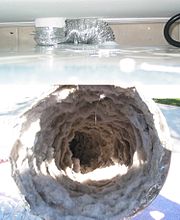 Moisture and lint are byproducts of the tumble drying process and are pulled from the drum by a fan motor and then pushed through the remaining exhaust conduit to the exterior termination fitting. Typical exhaust conduit comprises flex transition hose found immediately behind the dryer, the 4" (100 mm) rigid galvanized pipe and elbow fittings found within the wall framing, and the vent duct hood found outside the house.

A clean, unobstructed dryer vent improves the safety and efficiency of the dryer. As the dryer duct pipe becomes obstructed and filled with lint, drying time increases and causes the dryer to overheat and waste energy. In extreme cases, a blocked vent may result in a fire. Clothes dryers are one of the more costly home appliances to operate.[7]

Several factors can contribute to or accelerate rapid lint build-up. These include long or restrictive ducts, bird or rodent nests in the termination, crushed or kinked flex transition hose, terminations with screen-like features, and condensation within the duct due to un-insulated ducts traveling through cold spaces, i.e. crawl space or attic.

Dryers expose flammable materials to heat. Underwriters Laboratories[8] suggests cleaning the lint filter after every cycle for safety and energy efficiency, provision of adequate ventilation, and cleaning of the duct at regular intervals. UL also recommends that dryers not be used for glass fiber, rubber, foam or plastic items or any item that has had a flammable substance spilled on it.

In the United States, the U.S. Fire Administration[9] in a 2007 report estimated that clothes dryer fires account for about 15,600 structure fires, 15 deaths, and 400 injuries annually, with eighty percent (12,700) of the fires in residential buildings. The Fire Administration attributes “Failure to clean” as the leading factor contributing to clothes dryer fires in residential buildings, and observed that new home construction trends place clothes dryers and washing machines in more hazardous locations away from outside walls such as bedrooms, second-floor hallways, bathrooms, and kitchens.

To address the problem of clothes dryer fires, in November 2001, the UK-based commercial laundry equipment provider JLA Group launched their S.A.F.E. (an acronym for Sensor Activated Fire Extinguishing) dryer system. S.A.F.E. was developed to stop dryer fires by utilising two sensors which detect the change in temperature when a blaze starts in a dryer drum. These sensors then activate a water vapour mechanism to put out the fire.[10]

The average home clothes dryer has a carbon footprint of approximately 2 kilograms (4.4 pounds) of CO2 per load of laundry dried.[11] Energy Star, a United States government program concerned with energy efficiency in consumer products, does not rate clothes dryers. In the European Union, the EU energy labeling system is applied to dryers; dryers are classified with a label from A (best) to G (worst) according to the amount of energy used per kilogram of clothes (kWh/kg). Sensor dryers can automatically sense that clothes are dry and switch off. This means over-drying is not as frequent. Most of the European market sells sensor dryers now and are normally available in condensor and vented dryers.