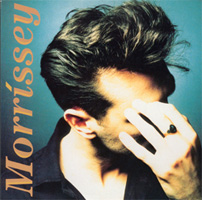 "Everyday Is Like Sunday" is the third track of 's debut solo album, "", and the second single to be released by the artist. It made number 9 in the UK singles chart and is today one of his best-known songs. "Everyday Is Like Sunday", as well as the single's s "Disappointed" and "Will Never Marry", feature on the compilation album "".

It is widely rumoured that the inspiration for this song is the once popular seaside resort town of , on the coast. Over time, it has become run down and quiet, even in mid-season. The video itself was shot in , another similar seaside resort in . However, there are numerous references to Mablethorpe in the song, including the lines: 'This is the coastal town that they forgot to bomb.' and 'Come, come, , come!" This refers to the fact that during , Mablethorpe was the only seaside resort in the East of England that was not bombed.

Morrissey has been quoted as saying that there is 'something strangely depressing about a seaside town out-of-season'.

The track has been covered by a number of other bands, including (on the Original Motion Picture soundtrack ""), by the (on their "Candy Everybody Wants" EP), and on his album "Acrobatas". of also covers the track on his solo album "". A cover version with only the title line from the chorus was used by the in their [http://www.morrissey-solo.com/article.pl?sid=08/09/07/1813241 advertisements in 2008] .

Unlike with "", the did not shower praise on this, Morrissey's second solo single. Instead, their reviewer warned the singer to not "attract a Sham Army style of following and end up like " and to "Think on, lad." However praise for the single was published in Q Magazine in when said that the "lyric to Everyday Is Like Sunday is, to me, a masterful piece of prose" and described it as her "all-time top song".