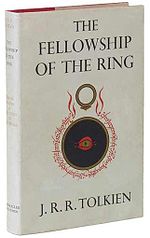 J.R.R. Tolkien's The Fellowship of the Ring is by a Christian author, and contains Christian themes,[1] though its wide popularity means that many would not consider it a specifically Christian novel.

A Christian novel is any novel that expounds and illustrates a Christian world view in its plot, its characters, or both,[2] or which deals with Christian themes in a positive way.

The tradition of Christian fiction

Christian novels – or at least, novels by Christians – have a rich tradition in Europe, going back several centuries, and drawing on past Christian allegorical literature, such as Dante Alighieri's Divine Comedy and John Bunyan's The Pilgrim's Progress. Twentieth century proponents of the Christian novel in English might include J.R.R. Tolkien, G. K. Chesterton, C.S. Lewis, and Madeleine L'Engle. Aslan in Lewis' The Lion, the Witch and the Wardrobe allegorically represents Christ, for example, while L'Engle's A Live Coal in the Sea explicitly references the medieval allegorical poem Piers Plowman.[3] However, the wide popularity of these authors among people of all faiths, together with the fact that in some conservative evangelical American Christian circles their novels were frowned upon,[4][5] would lead many to class works by these authors as mainstream literature, and not to place them in a specifically Christian category.

Many novels with Christian themes clearly fall into specific mainstream fiction genres. For example, J.R.R. Tolkien's The Lord of the Rings is viewed as mainstream fantasy, while Julian May's Galactic Milieu Series is viewed as mainstream science fiction, in spite of the references to the work of Jesuit priest Pierre Teilhard de Chardin. Similarly, G. K. Chesterton's Father Brown stories are mainstream detective fiction, even though the main character is a Catholic priest. 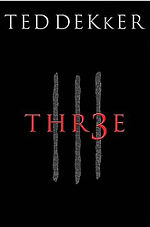 Ted Dekker's 2003 novel Thr3e is an example of the genre of modern American Christian novel, specifically of the thriller/suspense sub-genre.

In the last few decades the existence of a conservative Christian subculture, particularly in North America, has given rise to a specific genre of Christian novel. Books such as Love Comes Softly by Janette Oke (1979) and This Present Darkness by Frank Peretti (1985), combining a specific brand of conservative Christian theology with a popular romance or thriller form, have gained approval in the subculture, just as in earlier times Ben-Hur: A Tale of the Christ helped make the novel acceptable to conservative religious people of the day. Publication of such Christian novels has increased greatly from this beginning, and excellence in the genre is now recognised by the Christy Awards, although an article in Christianity Today recently argued that such use of popular forms risks "foisting on the world impoverished - even laughable - expressions of those genres."[4] 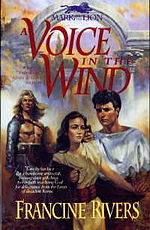 Francine Rivers's 1993 A Voice in the Wind is a Christian historical romance.

In North America, the Christian novel has evolved into a specific genre of its own, written explicitly by and for Christians of a particular type. Such a Christian novel does not have to involve an actual event or character in Bible history. A novel can be Christian in this sense merely because one of its characters either comes to a proper understanding of God and of man's need for salvation from sin, or faces a crisis of his or her faith. Nor does the plot need to turn on whether any given character is a Christian or not — although many Christian novels do have plots that explicitly reference persecution (in the past, the present, or the future), Bible history, or unfulfilled prophecy (as in the immensely popular Left Behind series). Popular authors of Christian novels include Francine Rivers in the romance sub-genre, and Ted Dekker in the thriller/suspense sub-genre.

Publishers of Christian novels include Harvest House, Tyndale House, Thomas Nelson, Bethany House, Bridge-Logos Foundation, Howard Publishing (a division of Simon and Schuster), and Waterbrook Press (a division of Random House). Such novels are today marketed world-wide through Christian bookstores and online distributors, such as ChristianBook.com and Amazon.com.