The Python is a family of air-to-air missiles (AAMs) built by the Israeli weapons manufacturer Rafael Advanced Defense Systems. The first was the Shafrir 1 missile developed in 1959, followed by the Shafrir 2 in early 1970s. Subsequently, the missiles were given the western name of "Python", starting with Python-3 in 1978. 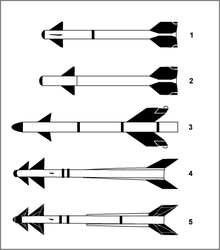 In the 1950s, the Israeli Air Force (IAF) submitted requirements for a domestically-made air-to-air missile, to promote domestic defense industry and reduce reliance on imports. Rafael Armament Development Authority was contracted to develop the Shafrir in 1959. The missile entered operational status with Israeli Mirage jets in 1963, but the IAF was unhappy with its performance. Soon, the improved Shafrir 2 was made, and it proved to be one of the most successful, and deadly missiles ever made. During the 1973 Yom Kippur War, the IAF launched 176 Shafrir 2 missiles, destroying 89 enemy aircraft.[3] The Shafrir 2 was exported along with Israeli-made aircraft to South American countries.

After the Shafrir 2, the new missiles made by Rafael were given the western name of Python. This is why the next missile built by Rafael in early 1970s was named Python-3, but there is no Python-1 or Python-2 (they were Shafrir 1, Shafrir 2). The Python-3 has improved range and all-aspect attack ability, it proved itself before and during the 1982 Lebanon War, destroying 35 enemy aircraft. The People's Republic of China was impressed with its performance and license-built the Python-3 as the PL-8 AAM.

Further improvements on the Python-3 lead to the development of Python-4 in mid-1980s. The Python-4 had limited "fire-and-forget" ability, and helmet-sight guidance.[4] In the 1990s Rafael started development on the Python-5 AAM, which was equipped with an advanced electro-optical imaging seeker with lock-on after-launch ability.[5] The new missile was show-cased in 2003 Paris Air Show, and intended for service with IAF the F-15I Ra'am ("Thunder") and the F-16I Sufa ("Storm").

The Python-5 is said to have full sphere launch ability or is an all-aspect missile, meaning it can be launched at a target regardless of the target's location relative to the direction of the launching aircraft. It can lock on to targets after launch, even when they are up to 100 degrees off boresight.

The Shafrir 1 was developed in 1959–1964 to fulfill IAF's requirement for a domestic air-to-air missile. It was intended to build the domestic defense industry's abilities, and reduce reliance on foreign imports. The fear on foreign dependence was later proven when France banned arms export to Israel.

The Shafrir 1 was intended for use on French-built Mirage jets. The first testing took place in France in 1963. However the missile's performance was so poor that they immediately started on the next improved version, the Shafrir 2.[6]

Python 3 missile under the wing of an Israeli F-15 Eagle.

The Python-3 is a much-improved AAM with all-aspect attack ability, higher speed, range, and performance. It performed well before and during the 1982 Lebanon War, scoring 35 (some sources claim 50) kills.[5]

China's PLAAF was quite impressed with this missile, and paid for licensed production as the PL-8 AAM in 1980s.[7] The program code named "Number 8 Project" (八号工程) and formally started on September 15, 1983. From March 1988 to April 1989, technology transfer to China was complete while license assembly and license built parts continued, and by the spring of 1989, the complete domestic Chinese built missile received state certification. The major supplier of the missile was Xi'an Eastern Machinery Factory (西安东方机械厂) located at Xi'an, and China is also reported to have developed a helmet-mounted sight (HMS) system for the PL-8.

The Python-4 is a 4th generation AAM with all-aspect attack ability, and integration with a helmet-mounted sight (HMS) system.[4] It entered service in the 1990s, and like its predecessor Python-3, it is integrated with the Elbit Systems DASH (Display And Sight Helmet) HMS system for Israeli F-15s and F-16s and Chilean F-16s (MLU and C/D block 50/52 plus) and F-5E/F Tiger III. The missile's seeker is reported to use dual band technology array similar to that of US FIM-92 Stinger (infrared and ultraviolet), with IRCCM (IR ECCM) ability to reduce background IR radiation to reduce the effectiveness of enemy flares.[8]

The Python-5 is currently the most able AAM in Israel's inventory and one of the most advanced AAMs in the world. It has BVR (beyond visual range), LOAL (lock-on after launch), and all-aspect, all-direction (including backward) attack ability. The missile features an advanced electro-optical imaging infrared seeker (IIR or ImIR) which scans the target area for hostile aircraft, then locks-on for terminal chase. With a total of eighteen control surfaces and careful design, the resulting missile is supposed to be as maneuverable as air-to-air missiles with thrust vectoring nozzles.[5] The Python-5 was first used in combat during the 2006 war in Lebanon, when it was used by F-16 Fighting Falcon warplanes to destroy two Hezbollah UAVs.[1] 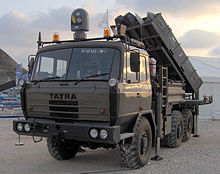 The SPYDER (Surface-to-air PYthon and DERby) is an anti-aircraft missile system that uses surface-to-air versions of the Python-5 and Derby missiles.