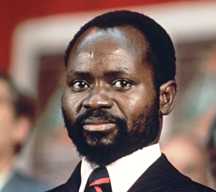 Samora Moisés Machel (, &ndash; , ) was a Mozambican military commander, revolutionary socialist leader and eventual . Machel led the country to independence in 1975 until his death in 1986, when his presidential aircraft crashed in mountainous terrain where the borders of Mozambique, and converge.

Samora Machel was born in the village of Madragoa (today's Chilembene), , (), to a family of farmers. He was a member of the ethnic group and his grandfather had been an active collaborator of . Under Portuguese rule, his father, an indigenous, was forced to accept lower prices for his crops than white farmers; compelled to grow labor-intensive cotton, which took time away from the food crops needed for his family; and forbidden to make an identifying brand on his cattle to prevent thievery. However, Machel's father was a successful farmer: he owned four plows and 400 head of cattle by 1940. Machel grew up in this agricultural village and attended mission elementary school. In 1942, Machel was sent to school in the town of Souguene in Gaza Province. The school, was run by Catholic missionaries who educated the children in Portuguese language and culture. Although having completed the fourth grade, Machel never completed his secondary education. However, he had the prerequisite certificate to train as a nurse anywhere in Portugal at the time since the nursing schools were not degree conferring institutions. Machel started to study nursing in the capital city of Lourenço Marques (today ), beginning in 1954. Unable to secure the fees to complete formal training at the Miguel Bombarda Hospital in Lourenço Marques, he got a job working as an aide in the hospital and earned enough to continue his education at night school. He worked at the hospital until he left the country to join the nationalist struggle. In the 1950s, he saw some of the fertile lands around his farming community on the appropriated by the provincial government and worked by white settlers who developed a wide range of new infrastructures for the region. Like many other Mozambicans near the southern border of Mozambique, some of his relatives went to work in the South African mines where additional job opportunities were found. Shortly afterwards, one of his brothers was killed in a mining accident. [ [http://links.jstor.org/sici?sici=0305-7070(199309)19%3A3%3C547%3ASMAB%3E2.0.CO%3B2-A Samora Machel, a Biography] , Author(s) of Review: David Hedges Journal of Southern African Studies, Vol. 19, No. 3 (Sep., 1993), pp. 547-549, ] [Azevedo, Mario, Historical Dictionary of Mozambique, African Historical Dictionaries, No. 47., Scarecrow Press, Inc., 1991.] [Christie, Iain, Machel of Mozambique, Zimbabwe Publishing House, 1988.] [Henriksen, Thomas H., Revolution and Counterrevolution: Mozambique's War of Independence, 1964-1974, Greenwood Press, 1983.] [Samora Machel: An African Revolutionary, edited by Barry Munslow, Zed Books, 1985.] [Mozambique: A Country Study, edited by Harold D. Nelson, Foreign Area Studies, American University, U.S. Government, Research Completed 1984.]

Machel was attracted to Marxist ideals and began his political activities in a hospital where he protested against the fact that black nurses were paid less than whites doing the same job. He later told a reporter how bad medical treatment was for Mozambique's poor: "The rich man's dog gets more in the way of vaccination, medicine and medical care than do the workers upon whom the rich man's wealth is built." His grandparents and great grandparents had fought against Portuguese colonial rule in the 19th century so it was not surprising that in 1962 Machel joined the () which was dedicated to creating an independent Mozambique. He received military training in 1963 elsewhere in Africa, and returned in 1964 to lead FRELIMO's first guerrilla attack against the Portuguese in northern Mozambique. Machel married his first wife, Josina, in 1969, having his first child later that same year. By 1969, Machel had become commander-in-chief of the FRELIMO army which had already established itself among Mozambique's peasantry. His most important goal, he said, was to get the people "to understand how to turn the armed struggle into a revolution" and to realize how essential it was "to create a new mentality to build a new society."Two months after the assassination of FRELIMO's president, , in February 1969, a ruling triumvirate comprising Samora Machel, and Frelimo's vice-president assumed the leadership. Simango was expelled from the party in 1970, and Machel assumed the presidency of the movement [ [http://www.answers.com/topic/samora-machel Samora Machel: Biography and Much More from Answers.com ] ] .

That goal would soon be realized. The FRELIMO army had weakened the colonial power and, after Portugal's coup in 1974, the Portuguese left Mozambique. Machel's revolutionary government then took over and he became independent Mozambique's first president on , . became vice-president. ,his wife Celina and other FRELIMOdissidents such as Adelino Gwambe and Paulo Gumane (former leaders of UDENAMO, one of the ) werearrested and later extra-judicially executed [ Mozambique: a tortuous road to democracy by J .Cabrita, Macmillan 2001 ISBN 970-0-333-97738-5 ] .

At home, Machel quickly put his Marxist principles into practice by calling for the of Portuguese plantations and property, and to have the FRELIMO government establish schools and health clinics for the peasants. As an internationalist, Machel allowed revolutionaries fighting white minority regimes in () and South Africa to train and operate with Mozambique. The regimes retaliated by forming a rebel group called to destroy the schools and hospitals built by FRELIMO, and to sabotage railway lines and hydroelectric facilities. The Mozambique economy suffered from these depredations, and began to depend on overseas aid - in particular from the . Nonetheless, Machel remained popular throughout his presidency.

The fatal aircrash and investigations

On , Samora Machel was on his way back from an international meeting in , in the presidential aircraft when the plane crashed in the , near Mbuzini. There were ten survivors,

The Margo Commission, set up by the South African government, but which included high-level international representationFact|date=October 2008, investigated the incident and concluded that the accident was caused by pilot error. Despite the acceptance of its findings by the , the report was rejected by the Mozambiquean and Soviet governments. The latter submitted a minority report suggesting that the aircraft was intentionally lured off course by a decoy beacon set up specifically for this purpose by the South Africans. Speculation about the accident has therefore continued to the present day, particularly in Mozambique,

Hans Louw, a operative, claims to have assisted in the death of former Mozambican President Samora Machel

Machel's widow, Graça, is convinced the aircrash was not an accident and has dedicated her life to tracking down her husband's alleged killers. In July 1998, Mrs Machel married the then South African President . She thus became unique in having been the of two different nations ( and ), although not simultaneously.

A memorial at the crash site was inaugurated on , by Nelson Mandela and his wife Graça, and by President of Mozambique. Designed by Mozambican architect, Jose Forjaz, at a cost to the South African government of 1.5 million Rand (US$ 300,000), the monument comprises 35 steel tubes symbolising the number of lives lost in the aircrash. At least eight foreigners were killed there, including the four Soviet crew members, Machel's two Cuban doctors and the Zambian and Zairean ambassadors to Mozambique. ["Panafrican News Agency" , "Monument for Machel plane crash site"]