The Finnish Navy (Finnish: Merivoimat, Swedish: Marinen) is one of the branches of the Finnish Defence Forces. The Navy employs 2,300 people and about 4,300 conscripts are trained each year. Finnish Navy vessels are given the ship prefix "FNS" simply short for "Finnish Navy Ship". Prefix is not used while conversing in Finnish language.

As a term "Finnish Navy" is a bit misleading since it refers to Finnish Naval fleet, but there are also coastal forces (including coastal artillery), which are in fact capable of releasing more firepower than the naval fleet, and in time of war naval ships are dependent on supply and cover provided by the coastal forces.

The current Commander-in-Chief of the Navy is Rear Admiral Veli-Jukka Pennala. The navy is organized into two naval commands. The navy also includes the Nyland brigad, where coastal jaegers are trained. The Nyland brigad is also the only Swedish language unit in the country and it carries the tradition and battle-honours of the Nyland Regiment from the Swedish Army.

During the Swedish era, the Finnish Gulf saw many battles between the Swedish and Russian fleets. Many of the Swedish naval bases were located in present-day Finland and many sailors came from Finland (see Archipelago Fleet). 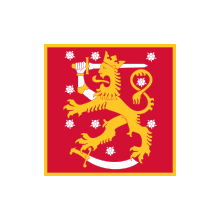 During the Russian rule (1809–1917) an entirely Finnish Navy unit, Suomen Meriekipaasi, was defending the country alongside the Baltic Fleet of the Imperial Russian Navy. Meriekipaasi participated the Crimean War, albeit mostly on-shore duties. Meriekipaasi manned the coastal batteries in Santahamina Island during the siege of Fortress Viapori in Helsinki. The ships ekipaasi had included steam frigates Rurik and Kalevala, named after the Finnish national epic (later serving Russian Pacific Fleet).

The first ships of the independent Finnish Navy were old ships left behind by the Russians during the Finnish Civil War. These included various ships the withdrawing Russians had not been able to transfer to Kronstadt as the ships had been too weak hulled or not seaworthy enough to endure the voyage. Finnish Navy started with several gunboats (Klas Horn, Matti Kurki, Turunmaa, and Karjala), 6 S-class torpedo boats, 8 C-class torpedo boats, 1 minelayer (Louhi), several minesweepers, and 5 T-class minelaying boats. In addition to warships Finns got several other vessels the Russians left behind.

In addition Germans gave in two netlayers (Hämeenmaa and Uusimaa) for the Finnish Navy which formed the core of the Finnish Navy until the coastal defense ships were commissioned. With Treaty of Tartu Finns had to return some of the equipment they had commandeered earlier. This equipment included 3 S-class torpedo boats (S3, S4 and S6), minesweepers Altair, Mikula, MP 7, MP 11, Ahvola, T 12, fifteen tugs, 4 small transports and 54 motorboats. Finns lost 3 more ships, torpedo boats C 1, C2 and C3, when on British admirals' insistence the weak hulled Finnish ships had to stay at Beryozovye Islands support of the British operations against Soviets until sea had frozen. Last remaining C-class torpedo boat was placed in reserve after this incident.

After years of wrangling with various plans for how to build navy, and due to the loss of torpedo boat S2 in heavy seas in October 1925, in 1927 the Parliament of Finland approved a plan to build two coastal defence ships (Panssarilaiva in Finnish) and four submarines. Motor torpedo boats were also acquired both from Britain as well as from domestic sources. New minesweepers were also constructed. Also a training ship Suomen Joutsen was acquired.

Finnish Naval strength at the begin of the World War II was limited. Some of the planned ships had not yet been constructed and wartime constraints on the economy prolonged ship building times.

On the Baltic Sea Finnish Navy had:

On lake Ladoga Finns had:

The navy also had several auxiliary warships, ice-breakers and patrol boats from the Coast Guard.

When the Winter War broke out the Finnish Navy moved to occupy the de-militarized Åland Islands and to protect merchant shipping. In the first month of the war battles between Soviet ships and Finnish coastal batteries were fought at Hanko, Finland, Utö and Koivisto. In Koivisto as well as at Hanko the batteries forced Soviet battleships to retire with damage. Finnish efforts to use submarines (Vesikko and Saukko) to sink the bombarding capital ships however failed. In December 1939 the ice became so thick that only the ice-breakers could still move. The two coastal defence ships were moved to the harbour in Turku where they were used to stiffen the air-defences of the city. They remained there for the rest of the war.

Before the Continuation War five more torpedo boats were ordered from Italy. The base that the Soviets had acquired in the Winter War at Hanko Peninsula divided the areas where the Finnish Navy would operate in two with its accompanying coastal artillery positions in both islands of Russarö and Osmussaar guarding the minefields blocking the entrance to the Eastern Gulf of Finland. Large mine fields were laid down in cooperation with the German Kriegsmarine when the war began. The coastal defence ships bombarded the Soviet base at Hanko until the Soviets evacuated Hanko in December 1941.[1]

Between 1941–1945 some 69,779 mines and mine sweeping obstacles were laid in the Gulf of Finland by Finnish, Soviet and German naval forces. The Soviet Navy laid 16,179 mines and 2,441 mine sweeping obstacles, the Finnish navy 6,382 mines, and the German navy's vessels, submarines and aircraft laid some 45,000 mines, of which 3,000 were magnetic mines. The last mine sweeping season was held in 1957, but the mine danger continued for some 10 more years, and there are still mines there.[2] The greatest loss of the Finnish Navy occurred on September 13, 1941 when the Ilmarinen ran into a mine and sank. 271 sailors lost their lives and only 132 were rescued. Most of the survivors later served in the Lake Onega flotilla, using old captured ships, including a steam engined paddlewheeler.

In 1942 the main focus of the war at sea was on the anti-submarine warfare as Finnish and German naval forces struggled against over 30 Soviet submarines that tried to attack shipping in the Baltic Sea as the German mine barrier had proven to be insufficient to completely stop Soviet submarines. The Soviet subs sank 18 ships, seven of which were Finnish. 12 Soviet submarines were also sunk three of which by Finnish submarines. Taking heed what happened in 1942 the Germans decided to follow on Finnish advice of laying anti-submarine nets between Naissaar and Porkkala immediately after waters came freed from ice. That barrier with its accompanying minefields effectively contained Soviet naval vessels to Easterns Gulf of Finland until autumn 1944 when Soviets were able to use Finnish coastal seeways to circumvent the barrier.

In Spring 1942 Finnish forces captured the island of Gogland. In July 1942 the Soviets made an attempt to occupy the small island of Sommers in the Gulf of Finland. The Soviets lost several smaller vessels (patrol and torpedo boats) together with 128 men. 102 Soviet soldiers were taken prisoner. During 1943 the navy received 14 new torpedo boats which were used to replace the old pre-war ones.

In 1944 the Soviets launched a major offensive against Finland, during which the navy fought in support of Finnish land forces the Gulf of Vyborg. In the end the ships were forced to pull out. 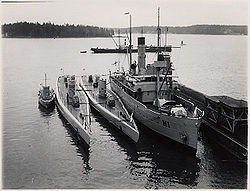 On September, 1944 the operations against Germany started. The main focus was in the north, the Lapland War, but the Germans also tried to capture Suursaari (Operation Tanne Ost). The attack was repulsed. During the battle, Finnish motor torpedo boats sank several German vessels.

The last action of the Finnish Navy was during the amphibious landing of troops from Oulu in Tornio. The Finnish gunboats successfully shelled German batteries, which had posed serious threat for the landingships, while their anti-aircraft batteries defended the convoy from German air attacks. The navy also hunted German U-boats in the Baltic, laying its last mines of the war while doing this.

After the Armistice the navy started very high demanding mine clearance operation, which lasted until 1950. Especially the Gulf of Finland had been extensively mined. The result were high casualties among the clearance crews.

The war time fleet was replaced in the 1950s and 1960s. Due to the Finland's neutrality she tried to balance her new purchase of equipment between the two blocs and also produce its own ships. A Bay class frigate (Matti Kurki), two Dark class fast patrol boats (Vasama 1 and Vasama 2) and four BYMS class minesweepers were bought from the UK, two Riga class frigates (Hämeenmaa and Uusimaa) and four Osa II class fast attack craft (Tuima class missile boats) from the Soviet Union. Some of the vessels, such as two Turunmaa class gunboats (Turunmaa and Karjala) and serie of Nuoli class fast attack crafts, were produced domestically.

The Paris peace talks in 1947 resulted in a treaty that limited the offensive capability of the Finnish military. For the navy, this meant a limitation to a fleet of no more than 10,000 tons and 4,500 men. As for the weaponry, torpedoes, submarines, mines and missiles were forbidden. The restrictions were eased in the 1960s and missiles and mines were allowed. The torpedo restriction was not either fully exercised as the Riga class frigates were equipped with torpedoes and a number of torpedo boats were manufactured as gunboats that could quickly be converted to carry torpedoes.

The cold-war limitations are no longer in place (they were nullified with the breakup of the Soviet Union), but the size of the navy is still roughly the same.

In the late 1990s, the Finnish Navy was developing a new missile squadron called Laivue 2000 (English: Squadron 2000). At first it was supposed to consist of two Hamina class missile boats (already built at this date) and four Tuuli class hovercraft. The Navy experimented with one prototype hovercraft, but announced in 2003 that the Tuuli class would not enter active operations and that no more of them would be built. Instead two new Hamina class missile boats were built, and the extra weaponry from the hovercrafts were installed on the Hämeenmaa class minelayers. 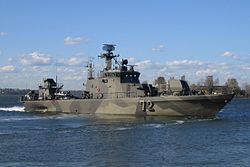 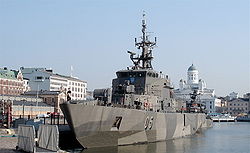 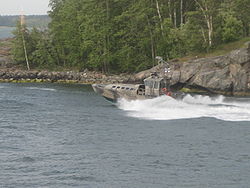 As the Squadron 2000 is finished, the Navy has shifted its attention to mine prevention and will replace the old Kuha and Kiiski class minesweepers with three Katanpää class mine countermeasure vessels, previously known as the MCMV 2010 and MITO classes, that will be delivered in 2012 and reach operational readiness by 2015. The ships are being constructed by the Italian company Intermarine and the order is valued 244.8 M€.[5]

Next generation's surface combatant, bigger than the current missile boats and more capable for international co-operation, is in pre-development stage.[6] The new class of multi-purpose naval vessels, dubbed MTA 2020 in the preliminary papers, is intended to replace Hämeenmaa and Pohjanmaa class minelayers and Rauma class missile boats as they are retired.[7]

Coastal Forces include both the Coastal Infantry and Jaeger forces and the remnants of the coastal artillery units, which have moved from fixed and towed guns to truck-mounted and infantry-carried anti-ship missiles. The towed guns are being phased out as obsolete and all artillery-based coastal defences are to be retired within a near future.

The Euro-Spike coastal missile system was taken into use in 2005 at the Uusimaa Brigade and the older truck-mounted RBS-15 missiles have been complemented with new, upgraded RBS-15 Mk.3 (known as MTO-85M).