Charles Townshend, 2nd Viscount Townshend Bt, KG, PC (18 April 1674 – 21 June 1738) (pronounced /ˈtaʊnzənd/ Town's-End) was a British Whig statesman. He served for a decade as Secretary of State, directing British foreign policy. He was often known as Turnip Townshend because of his strong interest in farming turnips, and his role in the British agricultural revolution.

Born at Raynham Hall, Norfolk, Townshend succeeded to the peerages in December 1687, and was educated at Eton College and King's College, Cambridge.[1] He had Tory sympathies when he took his seat in the House of Lords, but his views changed, and he began to take an active part in politics as a Whig. For a few years after the accession of Queen Anne he remained without office, but in November 1708 he was appointed Captain of the Yeomen of the Guard, having in the previous year been summoned to the Privy Council. He was ambassador extraordinary and plenipotentiary to the States-General from 1709 to 1711, taking part during these years in the negotiations which preceded the conclusion of the Treaty of Utrecht.

Secretary of State and other posts 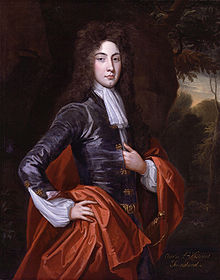 Charles Viscount Townshend, studio of Kneller. National Portrait Gallery NPG 1363. Probably painted soon after Townshend entered the House of Lords in 1697, but he does not wear his official robes. This is typical of the Kit-Cat Club portraits, which emphasise the like-mindedness and unity of the members rather than their different social positions[3]

After his recall to England he was busily occupied in attacking the proceedings of the new Tory ministry. Townshend quickly won the favour of George I, and in September 1714, the new king selected him as Secretary of State for the Northern Department. The policy of Townshend and his colleagues, after they had crushed the Jacobite rising of 1715, both at home and abroad, was one of peace. The secretary disliked the interference of Britain in the war between Sweden and Denmark, and he promoted the conclusion of defensive alliances between Britain and the emperor and Britain and France.

In spite of these successes the influence of the Whigs was gradually undermined by the intrigues of Charles Spencer, 3rd Earl of Sunderland, and by the discontent of the Hanoverian favourites. In October 1716, Townshend's colleague, James Stanhope afterwards 1st Earl Stanhope, accompanied the king on his visit to Hanover, and while there he was seduced from his allegiance to his fellow ministers by Sunderland, George being led to believe that Townshend and his brother-in-law, Sir Robert Walpole, were caballing with the Prince of Wales, their intention being that the prince should supplant his father on the throne. Consequently in December 1716 the secretary was dismissed and was made Lord Lieutenant of Ireland, but he only retained this post until the following April.

Early in 1720 a partial reconciliation took place between the parties of Stanhope and Townshend, and in June of this year the latter became Lord President of the Council, a post which he held until February 1721, when, after the death of Stanhope and the forced retirement of Sunderland, a result of the South Sea Bubble, he was again appointed secretary of state for the northern department, with Walpole as First Lord of the Treasury and Chancellor of the Exchequer. The two remained in power during the remainder of the reign of George I the chief domestic events of the time being the impeachment of Bishop Atterbury, the pardon and partial restoration of Lord Bolingbroke, and the troubles in Ireland caused by the patent permitting Wood to coin halfpence.

Townshend secured the dismissal of his rival, Lord Carteret, afterwards Earl Granville, but soon differences arose between himself and Walpole, and he had some difficulty in steering a course through the troubled sea of European politics. Although disliking him, George II retained him in office, but the predominance in the ministry passed gradually but surely from him to Walpole. Townshend could not brook this. So long, to use Walpole's witty remark, as the firm was Townshend and Walpole all went well with it, but when the positions were reversed jealousies arose between the partners. Serious differences of opinion concerning the policy to be adopted towards Austria and in foreign politics generally led to a final rupture in 1730. Failing, owing to Walpole's interference, in his efforts to procure the dismissal of a colleague and his replacement by a personal friend, Townshend retired on 15 May 1730. His departure removed the final obstacle to the conclusion of an Anglo-Austrian Alliance which would become the centrepiece of British foreign policy until 1756.

His remaining years were passed at Raynham, where he interested himself in agriculture and was responsible for introducing into England the cultivation of turnips on a large scale and for other improvements of the kind. He died at Raynham on 21 June 1738.

Townshend introduced to England the four-field crop rotation pioneered by farmers in the Waasland region in the early 16th century. He added the turnip and the clover to the traditional crop rotation and directed it to cover four individual fields. Wheat, barely, turnips and clover would be planted in that order in each field. Year by year, the crops would be rotated around – moving up if they could, or going back down to the bottom if they were at the top. There was no need to let the soil lie fallow as Clover would re-add nitrates (Nitrogen-containing salts) back to the soil through the root nodules attached to them which harboured symbiotic bacteria. These bacteria feed from the atmospheric Nitrogen and in turn produce the nitrates. The clover and turnip were used to feed livestock while the Wheat and Barely were mostly for export, with some being retained for domestic use.

As a result of this, and other agricultural experiments at Raynham, he became known as Turnip Townshend. Although a figure of some fun, his agricultural reforms were extremely important. However, Alexander Pope mentions him in Imitations of Horace, Epistle II, as a turnip obsessed person and says, in a note, that "that kind of rural improvement which arises from turnips" was Townshend's favorite conversational topic. 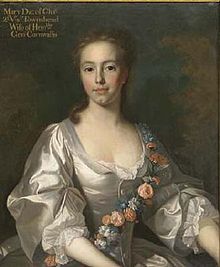