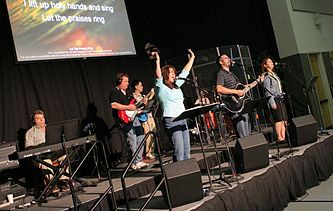 In early 1950s, the catholic Taizé Community in France started to attract youths from several religious denominations with worship hymns based on modern melodies.

In the 1950s and 60s the Church[which?] began to place particular emphasis on reaching to the youth.[citation needed] Christian Unions in university environments hosted evangelistic talks and provided biblical teaching for their members, Christian cafes opened with evangelistic aims, and church youth groups were set up.[examples needed] Amateur musicians from these groups began playing Christian music in a popular idiom. Some Christians felt that the Church needed to break from its stereotype as being structured, formal and dull to appeal to the younger generation.[examples needed] By borrowing the conventions of popular music, the antithesis of this stereotype[clarification needed], the Church restated the claims of the Bible through Christian lyrics, and thus sent the message that Christianity was not outdated or irrelevant. The Joystrings were one of the first Christian pop groups to appear on television, in Salvation Army uniform, playing Christian beat music. The Jesus People in America also had particular influence[citation needed], and began to create their own musical subculture, sometimes referred to as Jesus music— essentially hippie-style music with biblical lyrics. This Jesus music gradually bifurcated into Christian rock (music played for concerts) and 'praise music' (music for communal worship).[citation needed]

Churches began to adopt some of these songs and the styles for corporate worship. These early songs for communal singing were arguably the first examples of contemporary worship music[citation needed], and were characteristically simple, often only involving a three chord structure[dubious – discuss]. ‘Youth Praise’, published in 1966, was one of the first and most famous collections of these songs and was compiled and edited by Michael Baughen and published by the Jubilate Group. More recently songs are displayed using projectors on screens at the front of the church, and this has enabled greater physical freedom, and a faster rate of turnover in the material being sung. Important propagators of CWM today include Hillsong, Vineyard and Soul Survivor.

Lyrically, the informal, sometimes intimate, language of relationship is employed. The terms ‘You’ and ‘I’ are used rather than ‘God’ and ‘we’, and lyrics such as, ‘I, I’m desperate for You’,[1] and ‘Hungry I come to You for I know You satisfy, I am empty but I know Your love does not run dry’[2] both exemplify the similarity of the lyrics of some CWM to popular love songs. Slang is used on occasion (for example ‘We wanna see Jesus lifted high’[3]) and imperatives (‘Open the eyes of my heart, Lord, I want to see You’[4]), demonstrating the friendly, informal terms charismatic theology encourages for relating to God personally. Often a physical response is included in the lyrics (‘So we raise up holy hands’;[5] ‘I will dance, I will sing, to be mad for my king’[6]). This couples with the use of drums and popular rhythm in the songs to encourage full body worship.

The metaphorical language of the lyrics is subjective, and therefore does risk being misinterpreted; this emphasis on personal encounter with God does not always balance with intellectual understanding.[clarification needed]

Just as in secular popular and rock relationships and feelings are central topics[examples needed], so in CWM association to a personal relationship with God and free expression are emphasised.

As in traditional hymnody, some images, such as captivity and freedom, life and death, romance, power and sacrifice, are employed to facilitate relationship with God.[examples needed]

Because, in common with hymns, such music is sung communally, there can be a practical and theological emphasis on its accessibility, to enable every member of the congregation to participate in a corporate act of worship. This manifests in simple, easy-to-pick-up melodies[dubious – discuss] in a mid-vocal range;[dubious – discuss] repetition; familiar chord progressions and a restricted harmonic palette. Unlike hymns, the music notation may primarily be based around the chords, with the keyboard score being secondary. But throughout the history of CWM, some songs have used more complex rhythms and metres, and, to a lesser degree, harmonies.

This sound clip is a recent example of CWM and demonstrates the variety available within these boundaries: Strength will rise (Everlasting God). With the exception of one 2/4 bar shortly before the chorus, rhythmic variety is achieved by syncopation, most notably in the short section leading into the chorus, and in flowing one line into the next. The use of a pedal note at the opening secures the piece firmly in B flat major, and the whole piece uses only four chords: B flat (tonic), E flat (subdominant) and G minor (submediant), and just two references to F (dominant) as it leads into the chorus. Structurally, the form verse-chorus is adopted, each using repetition. In particular the use of a rising four-note figure, used in both melody and accompaniment, makes the song easy to learn.

Such techniques are common to CWM: the strong sense of home key, climactic chorus and repeated motifs. Though the styles have developed according to what is popular between 1950s and now, such music usually follows popular trends that are already well-established rather than the most current.[dubious – discuss]

At more charismatic services, members of the congregation may harmonise freely during worship songs, perhaps singing in tongues (see glossolalia), and the worship leader seeks to be ‘led by the Holy Spirit’. There may also be role of improvisation, flowing from one song to the next and inserting musical material from one song into another.[clarification needed]

There is no fixed band set up for playing CWM, but most have a lead singer and lead guitarist or keyboard player. Their role is to indicate the tone, structure, pace and volume of the worship songs, and perhaps even construct the order or content of the worship during performance. Some larger churches are able to employ paid worship leaders, and some have attained fame by worship leading, blurring contemporary worship music with Christian rock, though the role of the band in a worship service, leading and enabling the congregation in praise normally contrasts that of performing a Christian concert.[examples needed] In CWM today there will often be three or four singers with microphones, a drum kit, a bass guitar, one or two guitars, keyboard and possibly other, more orchestral instruments, such as a flute or violin. There has been a shift within the genre towards using amplified instruments and voices, again paralleling popular music, though some churches play the same songs with simpler or acoustic instrumentation.

The role of technology

Technological advances have played a significant role in the development of CWM. In particular the use of projectors means that the song repertoire of a church is not restricted to those in a song book, and so CWM has a much greater rate of turnover than other Christian genres.[clarification needed][dubious – discuss] Songs and styles go in trends. The internet has increased accessibility, enabling anyone to see lyrics and guitar chords for many worship songs, and download MP3 tracks. This has also played a part in the globalisation of much CWM. Some churches, such as Hillsong and Vineyard, have their own publishing companies, and there is a thriving Christian music business which parallels that of the secular world, with recording studios, music books, CDs, MP3 downloads and other merchandise. The consumer culture surrounding CWM has prompted both criticism and praise, and as Pete Ward deals with in his book ‘Selling Worship’, no advance is without both positive and negative repercussions.[7]

Criticisms include Gary Parrett’s concern that the volume of this music drowns out congregational participation, and therefore makes it a performance.[8] He quotes Ephesians 5:19, in which St. Paul tells the church in Ephesus to be ‘speaking to one another with psalms, hymns and songs from the Spirit’, and questions whether the worship band, now so often amplified and playing like a rock band, replace rather than enable the congregations’ praise.

Samuele Bacchiocchi expresses concerns over the use of the rock idiom, as he argues that music communicates on a subconscious level, and the often anarchistic, nihilistic ethos of rock stands against Christian culture. Using the physical response induced by drums in a worship context as evidence that rock takes peoples’ minds away from contemplating on the lyrics and God, he suggests that rock is actively dangerous for the Church.[9]

The theological content too has raised questions for some, including Martin Percy, who argues there is too great an emphasis on a very intimate relationship with God, using terms such as ‘I’ and ‘you’ instead of ‘we’ and ‘God’ and very passionate, physical language, and argues that this bias needs urgent correction. He explains how the emphasis on emotion can encourage hype and a need to create an atmosphere which evokes a sense of encounter with God, rather than allowing God to do so.[7]

Despite the biblical basis employed to underpin CWM, such as Ephesians 5:19, its surrounding culture tends to exclude systematic use of the psalms in weekly worship, sidelining lament from regular worship practice.[10] The emphasis on praise, and on an interpretation of 'worship' that is overwhelmingly positive, can lead to avoidance of the psalms of lament. Michael Vasey writes: "Scripture is, of course, full of lament – and devotes its finest literary creation to warning the godly against quick and easy answers. The power of many of the psalms we are embarrassed to use lies precisely here. Of all this there is little echo in our contemporary reading."[11] Whereas denominational churches generally use a weekly lectionary that gives a broad range of scriptural themes, including selected psalms on those themes, CWM churches tend not to have an agreed lectionary and the consequent agreement on using a broad range of material.[citation needed]

Pope John Paul II, concerning the role of musicians in the church, has this to say: "Today, as yesterday, musicians, composers, liturgical chapel cantors, church organists and instrumentalists must feel the necessity of serious and rigorous professional training. They should be especially conscious of the fact that each of their creations or interpretations cannot escape the requirement of being a work that is inspired, appropriate and attentive to aesthetic dignity, transformed into a prayer of worship when, in the course of the liturgy, it expresses the mystery of faith in sound."[12]

Some have noted that contemporary worship songs often reflect the social climate of individualism as the lyrics emphasize personal relationship with God, even within a group context. Christian apologist J.P. Holding cited the title of the song I Can Only Imagine as one such example of a desire for "self-fulfillment" taking the place of a proper view of God's holiness.[13]

As a common genre of Christian music found in Western churches CWM has proven successful.[citation needed] Its simplicity means that almost anyone with some degree of competency on a musical instrument may join in the leading of it. It is in a style suited to the musical taste of a generation who have grown up listening to pop songs and find classical music less accessible.[citation needed]