A urethral stricture is a narrowing of the urethra[1] caused by injury or disease such as urinary tract infections or other forms of urethritis.

During the early stages of the condition, the subject may experience pain during urination and the inability to fully empty the bladder. It is not uncommon for the bladder's capacity to significantly increase due to this inability to completely void.

Urethral strictures may cause problems with urination, including in certain cases the complete inability to urinate, which is a medical emergency. Additionally, a urinary tract infection is often present at, or prior to initial diagnosis. Antibiotics, quinolone class anti-infective agents, or a combination of trimethoprim/sulfamethoxazole are often employed as the initial stage of treatment. Occasionally, some degree of relief from straining, or improvement of the urinary stream (depending on the severity of the stricture) occurs with antibiotic treatment due to the reduction of urethral inflammation.

Urethral strictures are generally caused by either injury-related trauma to the tract or by a viral or bacterial infection of the tract, often caused by certain sexually transmitted infections (STIs). The body's attempt to repair the damage caused by the injury or infection creates a buildup of scar tissue in the tract resulting in a significant narrowing or even closure of the passage. Instrumentation of the urethra, particularly before the advent of flexible uro-endoscopy, was (and remains) an important causative event.

Short strictures in the bulbar urethra, particularly between the proximal 1/3 and distal 2/3 of the bulb, may be congenital. They probably form as a membrane at the junction between the posterior and anterior urethral segments. It is not usually noticeable until later in life, as it fails to widen as the urethra does with growth, thus it only impedes urinary flow relative to the rest of the urethra after puberty. Moreover, the patient will often not "know any different", and so will not complain about poor flow.

Passage of kidney stones through the urethra can be painful and subsequently can lead to urethral strictures.

In infants and toddlers, can be as a result of inflammation following a circumcision and not noticeable until toilet training when a deflected stream is observed or when the child must strain to produce a urinary stream. 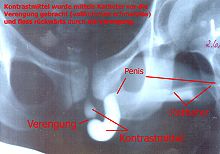 Urethrography showing an urethra stricture in a man.

Because of the high rate of recurrence, Urethral Stricture Disease is often a lifetime-long diagnosis, even after successful surgical resolution of the stricture. Patients should be monitored (and treated) for urinary tract infection , including patient instruction/education on detection of the symptoms of UTI and undergo a non-invasive Uroflowmetric Study at annual intervals for at least five years (post surgery). Additionally, after age 40, it is recommended that the prostate be monitored (in males) at intervals as determined by the physician/practitioner overseeing the situation. Although no formal studies are available documenting this, there appears to be a slightly higher incidence of prostatitis in stricture patients versus the general population.[3] Patient education and counseling is an important aspect of the successful resolution, and continued care for the stricture patient.