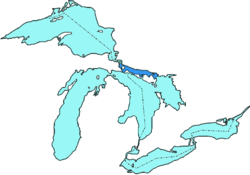 The North Channel is the body of water along the north shore of Lake Huron, in the Canadian province of Ontario. It is bordered on the east by Georgian Bay, on the west by the St. Marys River, to the north by the eastern Algoma District and to the south by the islands of Manitoulin, Cockburn, Drummond and St. Joseph.

In addition to Georgian Bay, the North Channel is connected to the main body of Lake Huron by the False Detour Channel and the Mississagi Strait, which separate the above-noted islands.

Little Current as seen across the North Channel

The only road crossings of the North Channel are at the Little Current Swing Bridge, which carries Highway 6 between Manitoulin Island and the mainland of Northern Ontario, and the Bernt Gilbertson Bridge, which carries Highway 548 from the mainland onto St. Joseph Island. The bridges are located at two of the narrowest points along the entire channel.

The communities on the mainland side of the North Channel, between the townships of Tarbutt and Nairn and Hyman, are commonly grouped as the North Shore region. This designation does not generally include the communities on St. Joseph or Manitoulin islands.