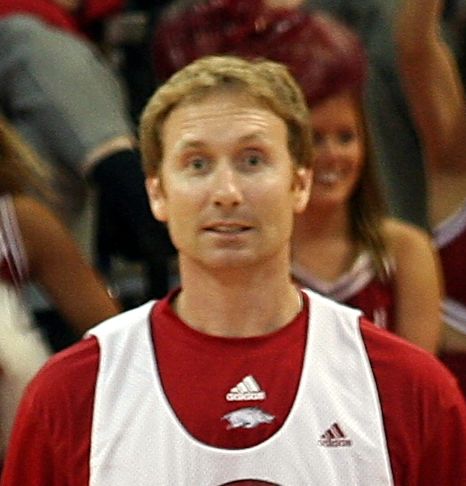 
John Pelphrey (born , in ) is the 14th head men's basketball coach at the (hired April 2007). After being named Kentucky's "Mr. Basketball" in

John Pelphrey attended in Paintsville, Kentucky, where he was coached by Bill Mike Runyon. He would lead the Tigers to the Sweet Sixteen in the State Tournament, and make the Sweet Sixteen Fab 50. During his senior year as a Tiger (1987), the team's final record was 32-5. The team won Paintsville Invitational Championship, the Hillbrook Classic, the 57th District Championship, the 15th Region Championship, and made the KHSAA "Sweet Sixteen" Final Four. A two-sport athlete, Pelphrey also had a passion for , he played during his high school years as a and a pitcher.

While a player at Kentucky from -, Pelphrey led the Wildcats to the SEC Tournament Championship and an NCAA Tournament appearance, including the epic battle with Duke in the . Pelphrey was a two-time captain while at Kentucky and in was named the UK Student Athlete of the Year. During his collegiate career, Pelphrey started 90 of 114 games, and averaged 11 points per game over his career. In , Pelphrey was inducted into the Kentucky Hall of Fame.

During his freshman year in -89, the UK program was rocked by a major scandal. One player, , was found by the NCAA to have received improper assistance on his college entrance exams. A second player, , received cash payments from a booster. The scandal led to the resignation of coach and athletic director , and led to major NCAA sanctions. Pelphrey and his fellow freshmen, , Deron Feldhaus, and , stayed with the program despite the sanctions, and entered UK lore during their senior season in -92.

That year, a relatively unheralded Kentucky team coached by , in its first year after coming off NCAA probation, lost to Duke in the . This game is often considered one of the greatest in college basketball history, ending with the Blue Devils' 's buzzer-beating jumper in overtime, which is among the most famous finishes in a college basketball game. The four seniors, as undisputed team leaders who showed their loyalty to UK during some of the program's darkest hours, would forever be known by Wildcats fans as "The Unforgettables" (A name given to them by Coach Pitino). Pelphrey is one of only 29 former Kentucky players to have his jersey retired (#34). [cite web
last = Story
first = Mark
title = Tubby Bashers not the majority
date = -04-20
url = http://www.kentucky.com/287/story/47968.html
format = HTML
accessdate = -05-02 ]

Pelphrey joined 's staff at Marshall for two years and was instrumental in the resurgence of the Thundering Herd program.

In , he followed Donovan from Marshall to Florida and coached as an assistant for 6 years. He helped the Gators garner a school record four straight NCAA Tournament appearances from to . During the - season, the Gators made their first-ever appearance in the national championship game against Michigan State.

In , Pelphrey led the Jags to a regular season title but they fell short in the Sun Belt Conference tournament quarterfinals. This led to an NIT berth and resulted in a loss to Syracuse in the first round 79-73.

Pelphrey was announced as the new head coach of the University of Arkansas basketball team at a press conference on Monday, April 9th in Fayetteville, Arkansas. Pelphrey replaced , who resigned after 26 hours as the head coach of Arkansas.

The Hogs won their first two conference games against Auburn and Alabama, before losing their next two to South Carolina and Georgia. Pelphrey's Razorback team then responded with back-to-back home wins against two ranked opponents, defeating Mississippi State and also Florida, coached by one of his mentors and dear friends, . The Razorbacks also handed a loss to ranked Vanderbilt along the way. Arkansas finished the SEC regular season with a 9-7 record.

The Hogs defeated Vanderbilt (then ranked 18th nationally) again in the 2008 SEC Tournament. They followed this up with arguably their biggest victory of the season, a 92-91 win over #4 Tennessee in the tourney semifinals. The Hogs lost in the championship game to underdog Georgia, but rebounded to defeat Indiana 86-72 in the opening round of the NCAA Tournament. It was the Razorbacks' first NCAA tourney victory since 1999. The Razorbacks were eliminated by overall #1 seed North Carolina in the second round.

He and his wife Tracy Lyon have two children, a son Jaxson, and a daughter Ann Marie. In 2003, the Pelphreys' infant son, John Patrick, died of a rare blood disorder.