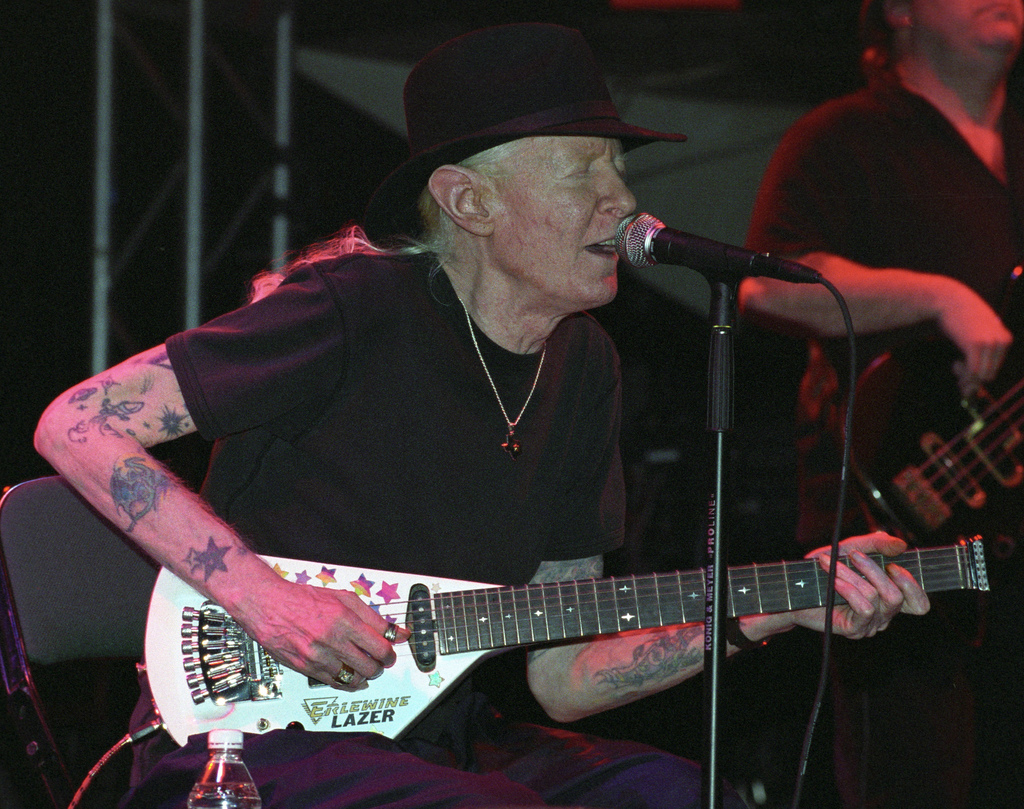 John Dawson "Johnny" Winter III (born on , in , USA) is an American guitarist, singer and producer. He is the first son of John and Edwina Winter who were very much responsible for both Johnny's and younger brother 's early musical awareness. Both Johnny and Edgar have .

Johnny began performing at an early age with Edgar. Johnny's very first TV appearance was on a local childrens television show that aired in Houston and Beaumont markets called the Don Mahoney and Jeana Claire show. Don Mahoney was a blind singing cowboy/kiddie show host in the Houston area for many, many years. Jeana Claire was his sidekick and a former Louisiana Hayride backup singer. Their show ran in one form or another on Houston television from the early fifties all the into the late '80's (albeit reruns on Access Cable). Johnny and Edgar were on Don's show as boys of about 10 or 12 playing ukelele and singing. Unfortunately, while Don did save some kinescopes of his shows from the fifties, Johnny and Edgar's duo was not one of them.

His recording career began at the age of 15, when their band Johnny and the Jammers released "School Day Blues" on a Houston record label. During this same period, he was able to see performances by classic blues artists such as , and .

In 1968, Winter began playing in a trio with bassist and drummer . An article in written by helped generate interest in the group. The album "Johnny Winter" was released near the end of that year. In 1969 they performed at numerous rock festivals including Woodstock. Contrary to urban legend, however, Johnny did not perform with and on the infamous Hendrix bootleg recording "" done at New York City's Scene Club. He has said, "Oh, I never even met Jim Morrison! There's a whole album of Jimi and Jim and I'm supposedly on the album but I don't think I am `cause I never met Jim Morrison in my life! I'm sure I never, never played with Jim Morrison at all! I don't know how that [rumour] got started." [ [http://www.djnoble.demon.co.uk/ints/JOHNNYW.INT.html Johnny Winter On Jimi Hendrix ] ]

Winter struggled with a heroin addiction in the early part of his career. After eventually recovering from the addiction, in 1973, he returned to the music scene in classic form with "", a song written by saluting Winter for overcoming his addiction.

In live performances, Winter often tells the story about how, as a child, he dreamed of playing with the blues guitarist . In 1977, he accomplished this goal and produced the album "". In 1978, he experienced continued success with the production of Waters' . He followed this in 1980, by producing Muddy's final effort, the album "". Their partnership produced a number of -winning recordings throughout, and he recorded the album "Nothing but the Blues" with members from Muddy Waters' band.

There are quite a few Johnny Winter albums that are considered "non-official." A majority of these albums were produced by , owner of Home Cooking Records/ Clarity Music Publishing. According to a [https://hou.secure.newtimes.com/issues/2003-08-28/music/racket_print.html Houston Press article] dated , , Johnny Winter left town for the express purpose of getting away from him. Roy Ames died on , of natural causes at age 66. As Ames left no obvious heirs, the ownership rights of the Ames master recordings remains unclear.

As Johnny stated in an interview when the subject of Roy Ames came up, "This guy has screwed so many people it makes me mad to even talk about him."

In a recent interview for [http://www.metroactive.com/papers/sonoma/03.29.06/winter-0613.html North Bay Bohemian, a Northern California weekly] , Johnny explained his current approach to music:

"Most of the stuff I do is fairly old," he says, which befits the lifelong bluesman. But don't expect to hear "Rock 'n' Roll Hoochie Koo," even though that was one of his signature songs back in the day. On this tour, Winter says firmly, "we're not playing any rock and roll at all."

Despite experiencing several health crises in recent years, rendering him incapable of performing without being seated, Winter still tours regularly. Sitting down, the venerated musician concentrates on blues numbers and eschews his rock hits.

Fans at an August 23, 2008 show in Bowling Green, Kentucky were therefore surprised when he covered not only blues songs such as Jimi Hendrix's Red House and Ray Charles' Blackjack, but also two popular rock and roll songs: the Rolling Stones' It's All Over Now, and Bob Dylan's Highway 61 Revisited.

At a concert in Tracy, Calif., on Sept. 27, Johnny's guitar playing was so hot that it literally caused the amplifier to start smoking. Several times throughout the performance, roadies ran out to try to solve the problem. Johnny refused to leave the stage and just kept playing his scorching style of guitar playing. His current set does consist of many rockin' blues numbers, and he had a second guitarist come out to play with the power trio to ramp up "It's All Over Now." The guitar god can barely walk now, but his hands and fingers are as nimble and lightning-quick as ever.

Winter produced two Grammy winning albums by Muddy Waters, and . At least three of his own albums were also nominated for Grammy awards. [ [http://www.johnnywinter.net/bluesman/ Johnny Winter ] ]

He was one of the many acts to perform at the , playing a nine song set that featured his brother Edgar on two of the songs.

In 1988, he was inducted into the Blues Foundation Hall of Fame.

paid homage to Winter by recording an instrumental song titled "Tribute to Johnny", in which they try to emulate Winter's unique sound. The song was originally intended for their highly acclaimed 1995 album "" but was rejected and eventually turned as b-side on their "Zero" single and also was included in their box-set "".