Lincomycin is a lincosamide antibiotic that comes from the actinomyces Streptomyces lincolnensis. It has been structurally modified by thionyl chloride to its more commonly known 7-chloro-7-deoxy derivative, clindamycin. It is available with the brand name of Lincobect in Pakistan market.

Although similar in structure, antibacterial spectrum, and in mechanism of action to macrolides, they are also effective against other species as well, i.e., actinomycetes, mycoplasma, and some species of Plasmodium.

However, because of its adverse effects and toxicity, it is rarely used today and reserved for patients allergic to penicillin or where bacteria has developed resistance.

Intramuscular administration of a single dose of 600 mg of Lincomycin produces average peak serum levels of 11.6 micrograms/ml at 60 minutes, and maintains therapeutic levels for 17 to 20 hours, for most susceptible gram-positive organisms. Urinary excretion after this dose ranges from 1.8 to 24.8 percent (mean: 17.3 percent).

Tissue level studies indicate that bile is an important route of excretion. Significant levels have been demonstrated in the majority of body tissues. Although lincomycin appears to diffuse in the cerebrospinal fluid (CSF), levels of lincomycin in the CSF appear inadequate for the treatment of meningitis.

Lincomycin is an antibiotic classified as a constituent of the lincosamide group, which typically feature a 6,8-dideoxy-6-aminooctose lincosamine.[1] In Lincomycin A, this sugar moiety (referred to as methylthiolincosamide) is linked via an amide bond to an amino acid derivative (referred to as propylhygric acid). Lincomycin biosynthesis occurs via a biphasic pathway producing propylproline and methylthiolincosamide followed by condensation of these subunits to N-demethyllincomycin and methyllation by S-adenosylmethionine to produce the antibiotic lincomycin.

In the biosynthesis of the amino acid moiety of lincomycin, tyrosine comprises seven of the nine carbons in the prophylhygric acid, while the remaining two carbons are added in reactions with S-adenosylmethionine.[2][3][4][5] Glucose is converted via glycolysis and the hexose monophosphate pathway to phosphoenolpyruvate and erythrose-4-phosphate, respectively, which are converted via the shikimate pathway to tyrosine and dihydroxyphenylalanine. Although the multistep conversion of dihydroxyphenylalanine to propylproline remains unknown, experiments involving accumulation of 1,2,3,6-tetradehydro-propylproline in mutants lacking a reductase requiring lincomycin cosynthetic factor suggests a biosynthetic scheme that Kuo and coworkers have modified from Brahme et al.[4][5] to accommodate the remaining steps leading to propylproline.[6][7] 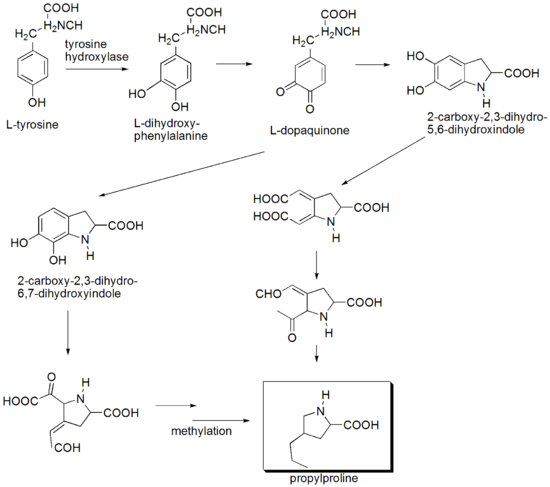 The biosynthesis of the methythiolincosamide sugar moiety is still not entirely known, although two different pathways have been predicted.[5][8] One possible pathway proposes the C8 carbon framework of methythiolincosamide originates from the condensation of a pentose (C5) unit, stemming from either the hexose monophosphate or condensation through a transketolase reaction with glyceraldehyde-3-phosphate and sedoheptulose-7-phosphate, and a C3 unit, added through a transaldolase reaction with sedoheptulose-7-phosphate. Once condensed, an octose (C8) unit is formed that can undergo isomerization to octose, dephosphorylation and reduction of the C8 carbon, transamination of 6-ketooctose, and thiomethylation of C1 to finally convert the octose unit to the methylthiolincosamide. A substantially different pathway for the formation of the methythiolincosamide proposes that its biosynthesis involves nucleotide activation followed by a series of modifications of dNTP-activated sugar intermediates. Eight genes, lmb-LMNZPOSQ, have been found to form a "sugar subcluster" which might be involved in this sugar metabolism.[9] 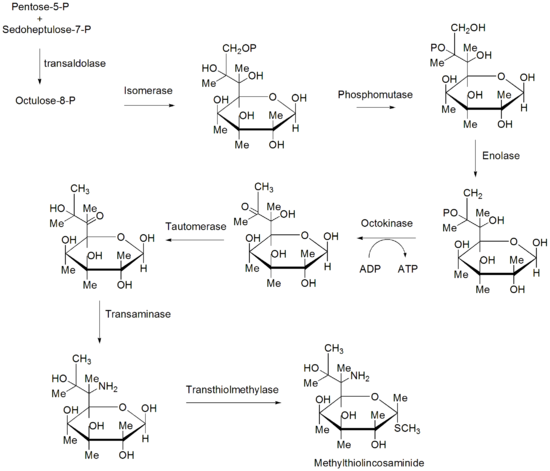 An injection of 0.75 mg, given subconjuctivally, will result in ocular fluid levels of antibiotic (lasting for at least 5 hours) with Minimum Inhibitory Concentrations sufficient for most susceptible pathogens.

When therapy with lincomycin is required in individuals with severe impairment of renal function, an appropriate dose is 25 to 30 percent of that recommended for patients with normally functioning kidneys.