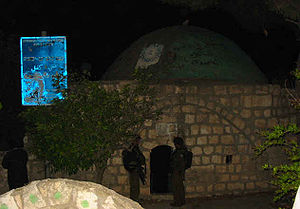 Mark of Caleb is the don, Timnat Serah

Caleb (Hebrew: כָּלֵב‎, Kalev; Tiberian vocalization: Kālēḇ; Hebrew Academy: Kalev) is a male given name. A character called Caleb is named in both the Bible and Quran.

When the Hebrews came to the outskirts of Canaan, the land that had been promised to them by God, after having fled slavery in Egypt, Moses (the Hebrew leader) sent twelve spies (Hebrew: מרגלים‎, meraglim) into Canaan to report on what was there—one spy representing each of the Twelve Tribes. Ten of the spies returned to say that the land would be impossible to claim, and that giants lived there who would crush the Hebrew army. Only two, Joshua (from the tribe of Ephraim) and Caleb (representing Judah), returned and said that God would be able to deliver Canaan into the hands of the Hebrew nation.

The Bible records that, because of the testimony of ten of the spies, the Hebrews chose not to enter Canaan. For this disobedience, God caused them to wander in the desert for forty years before being allowed to enter Canaan and conquer it as their home. The only adult Israelites allowed to survive these forty years and enter Canaan were Joshua and Caleb, as a reward for their faith in God. This is recorded in the Book of Numbers. Caleb is called "my servant" by God in Numbers 14:24, a position of the highest honor heretofore used only for Moses. Caleb's wife was Azubah (I Chronicles 2:18,19).

Caleb was a true Israelite by birth and is associated with and represented the tribe of Judah as one of the 12 spies. Caleb is noted as being the son of Jephunneh the Kenizzite (Numbers 32:12). Kenizzites are listed (Genesis 15:19) as a tribe in the land promised to Abram (Abraham).

Faithful Caleb is called “the son of Jephunneh the Kenizzite.” (Nu 32:12; Jos 14:6, 14) Jephunneh could have descended from some member of the non-Israelite Kenizzites (Ge 15:18, 19) who associated with the descendants of Jacob (Israel), marrying an Israelite wife. However, more likely the name Kenizzite in his case derives from some ancestral Judean family head named Kenaz, even as Caleb’s brother was so named.—Jos 15:17; Jg 1:13; 1Ch 4:13.

Notably, all references to the Kenizzite connection, which would imply a "quasi-foreign" status, were removed from the Septuagint, which adds instead a qualifier (ό διακεχωιζιδμένος) that means "he who goes against the current".[1] The Talmud (Sotah 11b) also interprets the name Jephunneh in this vein: "he (Caleb) was a son who turned —panah— from the counsel of the spies".[2]

A Midrash refers to Caleb being devoted to the Lord and to Moses, splitting from the other scouts to tour Hebron on his own and visit the graves of the Patriarchs.

In the aftermath of the conquest, Caleb asks Joshua to give him a mountain in property within the land of Judah, and Joshua gives him Hebron (Joshua 14). Since Hebron itself was one of the Cities of Refuge to be ruled by the Levites, it is later explained that Caleb actually was given the outskirts (Joshua 21:11-13). Caleb promised his daughter Achsah in marriage to him who will conquer the land of Debir from the giants. This was eventually accomplished by Othniel Ben Kenaz, Caleb's half-brother, who became Caleb's son-in-law as well.

Other people named Caleb in the Bible

In 1 Chronicles 2:18 one "Caleb son of Hezron" is mentioned. That Caleb is noteworthy for being the great-grandfather of architect Bezalel. Per the context, this man was an Israelite by lineage, which (if the Kenizzite hypothesis holds) would make it implausible that he and the other Caleb are the same person (even though the Talmud argues so in Sotah 11b).[2][3]

1 Samuel 25:3 states that Nabal, the husband of Abigail before David, was "of the house of Caleb". It is not stated whether this refers to one of the two Calebs mentioned in the Bible, or another person bearing the same name.

Caleb's name is spelled with the same consonants as כֶּלֶב kéleḇ meaning "dog", prompting the common conclusion that the name Caleb means "dog". In Eblaite language, the name Galibu (Caleb) is found, meaning "dog-like" in the sense of fleet-footed (as the hound overtakes the deer, which is the model of fleetness in Semitic lore).

Another plausible origin is a transposition of a name found in other ancient Semitic languages such as Phoenician and Ugaritic, meaning "servant of the Lord" [1].

In the Quran Caleb is mentioned in the 5th Surah of the Quran (5:20-26). The two men mentioned here are Caleb and Joshua: "Remember Moses said to his people: "O my people! Call in remembrance the favour of The Lord unto you, when He produced prophets among you, made you kings, and gave you what He had not given to any other among the peoples. "O my people! Enter the holy land which Allah hath assigned unto you, and turn not back ignominiously, for then will ye be overthrown, to your own ruin." They said: "O Moses! In this land are a people of exceeding strength: Never shall we enter it until they leave it: if (once) they leave, then shall we enter." (But) among (their) God-fearing men were two on whom The Lord had bestowed His grace: They said: "Assault them at the (proper) Gate: when once ye are in, victory will be yours; But on Allah put your trust if ye have faith." They said: "O Moses! while they remain there, never shall we be able to enter, to the end of time. Go thou, and thy Lord, and fight ye two, while we sit here (and watch)." He said: "O my Lord! I have power only over myself and my brother: so separate us from this rebellious people!" The Lord said: "Therefore will the land be out of their reach for forty years: In distraction will they wander through the land: But sorrow thou not over these rebellious people"