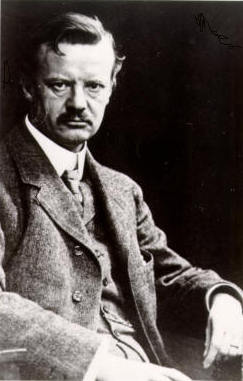 Hans Spemann (, &ndash; , ) was a German embryologist who was awarded the in 1935 for his discovery of the effect now known as embryonic induction, an influence, exercised by various parts of the , that directs the development of groups of cells into particular tissues and organs.

Hans Spemann was born in Stuttgart on June 27, 1869, the eldest son of publisher Wilhelm Spemann and his wife Lisinka, nee Hoffman. After he left school in 1888 he spent a year in his father's business, then, in 1889-1890, he did military service in the Kassel Hussars followed by a short time as a bookseller in Hamburg. In 1891 he entered the University of Heidelberg where he studied medicine, taking his preliminary examination in 1893. There he met the biologist and psychologist who had begun experiments on the embryological developments of newts and shown that, if the lens of an developing newt's eye is removed, it regenerates.

In 1892 Spemann married Klara Binder: the couple were to have two sons. In 1893-1894 he moved to the University of Munich for clinical training but decided, rather than becoming a clinician, to move to the Zoological Institute at the University of Würzburg, where he remained as a lecturer until 1908. His degree in zoology, botany, and physics, awarded in 1895, followed study under , and .

For his Ph.D. thesis under Boveri, Spemann studied cell lineage in the parasitic worm "Strongylus paradoxus", for his teaching diploma, the development of the middle ear in the frog. [ Monograph by Claudio Stern, J. Z. Young Professor and Head of the Department of Anatomy and Developmental Biology at University College London, based on Spemann, 1943; Mangold, 1953; Hamburger, 1988. See: http://www.bioinfo.org.cn/book/Great%20Experments/great30.htm (retrieved May 2008).]

During the winter of 1896, while quarantined in a sanitarium recovering from tuberculosis, Spemann read 's book "The Germ Plasm: A Theory of Heredity". [ [http://library.thinkquest.org/24355/data/details/profiles/spemann.html Scientist Profile : Hans Spemann ] ] He wrote in his autobiography: "I found here a theory of heredity and development elaborated with uncommon perspicacity to its ultimate consequences.....This stimulated experimental work of my own" [ Spemann's autobiography, quoted in V. Hamburger, The Heritage of Experimental Embryology: Hans Spemann and the Organizer, 1988, Oxford University Press, Oxford, page 9.]

Results in embryology had been contradictory: in 1888 , who had introduced the experimental manipulation of the embryo to discover the rules of development, had reported that a cell divided from a two-cell-stage embryo gave rise to half an embryo. In 1892 , performing similar experiments on sea urchin embryos, had reported that, on the contrary, he had ended up with a completely-formed but smaller embryo. The reasons for the discrepancy were unclear. Others, including and , attempted to separate the two cells, for the matter was of great importance, particularly to the arguments between proponents of and , but satisfactory results could not be achieved. [ Stern, op. cit.]

As a master of micro-surgical technique, beginning with his continuing work on the amphibian eye, Spemann's papers in the early years of the 20th century on this vexed question were to be a great contribution to the development of experimental , causing him to be hailed in some quarters as the true founder of micro-surgery. He succeeded in dividing the cells with a noose of baby hair. Spemann found that one half could indeed form a whole embryo, but observed that the plane of division was crucial. [ ibid.] This dispatched the theory of preformation and gave some support to the concept of a , a concept of which Spemann learned from .

Spemann was appointed Professor of Zoology and Comparative Anatomy at Rostock in 1908 and, in 1914, Associate Director of the Kaiser Wilhelm Institute of Biology at Dahlem, Berlin. Here he undertook the experiments that would make him famous. Drawing upon the recent work of Warren H. Lewis [ibid.] and Ethel Browne Harvey, [ [http://mblwhoilibrary.mbl.edu/publications/women_harvey.html Ethel Browne Harvey] ] he turned his skills to the , grafting a "field" of cells (the ) from one embryo onto another.

The experiments, aided by Hilde Proescholdt (later Mangold), a Ph.D candidate in Spemann's laboratory in , took place over several years and were published in full only in 1924. They described an area in the embryo, the portions of which, upon transplantation into a second embryo, organized or "induced" secondary embryonic primordia regardless of location. Spemann called these areas "organiser centres" or "organisers". Later he showed that different parts of the organiser centre produce different parts of the embryo.

Despite his modern reputation, Spemann continued to entertain neo-vitalist "field" analyses similar to those of , and . However, the follow-up work of Johannes Holtfreter, and , and others showed that organizers killed by boiling, fixing or freezing were also capable of causing induction. The conclusion was that the actual controllers were inert molecules, though little headway was made until the end of the 20th century in discovering how signalling took place.

From 1919 Spemann was Professor of Zoology at the University of Freiburg-im-Breisgau, where he continued his line of enquiry until in 1937 he was relieved of his post to be replaced by one of his first students, Otto Mangold. In 1928 he was the first to perform using amphibian embryos - one of the first moves towards cloning. He was awarded the Nobel Prize in 1935. His theory of embryonic induction by organisers is described in his book "Embryonic Development and Induction" (1938). He died of heart failure on 12 September 1941. He never lost his love of classical literature and, throughout his life, organized evening gatherings of friends to discuss art, literature, and philosophy.

* [http://www.nature.com/nrm/journal/v7/n4/box/nrm1855_BX1.html Explanation of the Spemann-Mangold experiment] from a Nature Reviews article