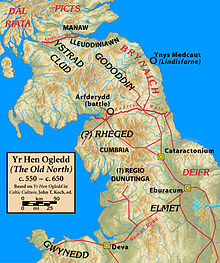 Yr Hen Ogledd (Welsh pronunciation: [ər ˌheːn ˈɔglɛð]; English: The Old North) is a Welsh term used by scholars to refer to those parts of what is now northern England and southern Scotland in the years between 500 and the Viking invasions of c. 800, with particular interest in the Brythonic-speaking peoples who lived there.

The term is derived from heroic poetry as told by bards for the enjoyment and benefit of the Welsh kings of that era. From the relatively southern Welsh perspective, these are stories of the Gwŷr y Gogledd (English: Men of the North), with their relationships to the great men of the past given by genealogies such as Bonedd Gwŷr y Gogledd (English: Descent of the Men of the North) and the Harleian genealogies. 'The North' became 'The Old North' in recognition of the passage of time since the literary works were contemporary, hence 'The Old North' and 'Men of the Old North'.

In attempting to construct a reasonably accurate history of the areas that now make up southern Scotland and northern England, scholars have adopted the term "Hen Ogledd" or "Old North" from the Welsh heroic poetry to refer to the Brythonic kingdoms, such as Rheged. As used by historians, the term is meant to apply to an area of scholarly research, and is not intended to give undue weight to the poetry and genealogy that first produced the term.

Almost nothing is reliably known of Central Britain before c. 550. There had never been a long-term, effective Roman control north of the Tyne – Solway line, and south of that line effective Roman control ended long before the traditional departure of the Roman military from Roman Britain in 407. It was noted in the writings of Ammianus Marcellinus and others that there was ever-decreasing Roman control from the 2nd century onward, and in the years after 360 there was widespread disorder and the large-scale permanent abandonment of territory by the Romans.

In 550, the region was controlled by Brythonic-speaking peoples except for the eastern coastal areas, which were controlled by the Anglian peoples of Bernicia and Deira. To the north were the Picts, with the Irish controlled kingdom of Dál Riata to the northwest. All of these peoples would play a role in the history of the Old North.

From a historical perspective the portrayal of the Men of the North as native Britons defending against intruding Anglo-Saxons is a partisan view. Wars were frequently internecine, and Britons were aggressors as well as defenders, as was also true of the Angles, Picts, and Gaels. However, those Welsh stories of the Old North that tell of Briton fighting Anglian have a counterpart, told from the opposite side. The story of the demise of the kingdoms of the Old North is the story of the rise of Northumbria from two coastal kingdoms to become the premier power in Britain north of the Humber Estuary and south of the Firths of Clyde and Forth. 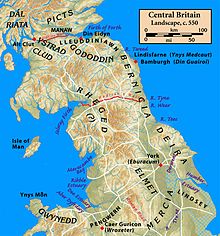 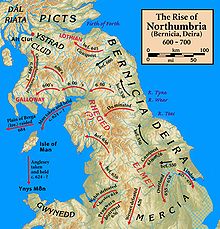 The interests of kingdoms of this era were not restricted to their immediate vicinity. Alliances were not made only within the same ethnic groups, nor were enmities restricted to nearby different ethnic groups. An alliance of Britons fought against an alliance of Britons at the Battle of Arfderydd. Áedán mac Gabráin of Dál Riata appears in the Bonedd Gwŷr y Gogledd, a genealogy among the pedigrees of the Men of the North.[1] The Historia Brittonum states that the Northumbrian king Oswiu married a Briton who may have had some Pictish ancestry.[2][3] A marriage between the Northumbrian and Pictish royal families would produce the Pictish king Talorgan. Áedán mac Gabráin fought as an ally of the Britons against the Northumbrians. Cadwallon ap Cadfan of Gwynedd allied with Penda of Mercia to defeat Edwin of Northumbria.

Conquest and defeat did not necessarily mean the extirpation of one culture and its replacement by another. The Brythonic region of northwestern England was absorbed by Anglian Northumbria in the 7th century, yet it would re-emerge 300 years later as South Cumbria, joined with North Cumbria (Strathclyde) into a single state.

The organisation of the Men of the North was tribal,[note 1] based on kinship groups of extended families, owing allegiance to a dominant 'royal' family, sometimes indirectly through client relationships, and receiving protection in return. For Celtic peoples, this organisation was still in effect hundreds of years later, as shown in the Irish Brehon law, the Welsh Laws of Hywel Dda, and the Scottish Laws of the Brets and Scots. The Germanic Anglo-Saxon law had culturally different origins, but with many similarities to Celtic law. Like Celtic law, it was based on cultural tradition, without any perceivable debt to the Roman occupation of Britain.[note 2]

A primary royal court (Welsh: llys) would be maintained as a 'capital', but it was not the bureaucratic administrative centre of modern society, nor the settlement or civitas of Roman rule. As the ruler and protector of his kingdom, the king would maintain multiple courts throughout his territory, traveling among them to exercise his authority and to address the needs of his clients, such as in the dispensing of justice. This ancient method of dispensing justice survived throughout England as a part of royal procedure until the reforms of Henry II (reigned 1154 – 1189) modernised the administration of law.

Modern scholarship uses the term Cumbric for the variety of the British language spoken in the Hen Ogledd. It appears to have been very closely related to Old Welsh, with some local variances. There are no surviving texts written in the dialect; evidence for it comes from placenames, proper names in a few early inscriptions and later non-Cumbric sources, two terms in the Leges inter Brettos et Scottos, and the corpus of poetry by the cynfeirdd, the "early poets", nearly all of which deals with the north.[4]

The cynfeirdd poetry is the largest source of information, and it is generally accepted that some part of the corpus was first composed in the Old North.[4] However, it survives entirely in later manuscripts created in Wales, and it is unknown how faithful they are to the originals. Still, the texts do contain discernible variances that distinguish the speech from contemporary Welsh. In particular, these texts contain a number of archaisms – features that appear to have once been common in all Brythonic varieties, but which later vanished from Welsh and the Southwestern dialects.[4] In general, however, the differences appear to be slight, and the distinction between Cumbric and Old Welsh is largely geographical rather than linguistic.[5]

Cumbric gradually disappeared as the area was conquered by the Anglo-Saxons, and later the Scots and Norse, though it survived in the Kingdom of Strathclyde, centered around Alt Clut in what is now Dumbarton in Scotland. Kenneth H. Jackson suggested that it re-emerged in Cumbria in the 10th century, as Strathclyde established hegemony over that area. It is unknown when Cumbric finally went extinct, but the series of counting systems of Celtic origin recorded in Northern England since the 18th century have been proposed as evidence of a survival of elements of Cumbric;[5] though the view has been largely rejected on linguistic grounds, with evidence pointing to the fact that it was imported to England after the Old English era.[6][7]

One of the traditional stories relating to the creation of Wales is derived from the arrival in Wales of Cunedda and his sons as 'Men of the North'. Cunedda himself is held to be the progenitor of the royal dynasty of Gwynedd, one of the largest and most powerful of the medieval Welsh kingdoms, and an ongoing participant in the history of the Old North. Cunedda, incidentally, is represented as a descendant of one of Maximus' generals, Paternus, who Maximus appointed as commander at Alt Clut. However, the relationship between Wales and the Old North is more substantial than this one event, amounting to a self-perception that the Welsh and the Men of the North are one people.[note 3]

Nature of the sources

Stories praising a patron and the construction of flattering genealogies are neither unbiased nor reliable sources of historically accurate information. However, while they may exaggerate and make apocryphal assertions, they do not falsify or change the historical facts that were known to the bards' listeners, as that would bring ridicule and disrepute to both the bards and their patrons. In addition, the existence of stories of defeat and tragedy, as well as stories of victory, lends additional credibility to their value as sources of history. Within that context, the stories contain useful information, much of it incidental, about an era of British history where very little is reliably known.

These sources are not without deficiencies. Both the authors and their later transcribers sometimes displayed a partisanship that promoted their own interests, portraying their own agendas in a positive light, always on the side of justice and moral rectitude. Facts in opposition to those agendas are sometimes omitted, and apocryphal entries are sometimes added.

While Bede was a Northumbrian partisan and spoke with prejudice against the native Britons, his Ecclesiastical History is highly regarded for its effort towards an accurate telling of history, and for its use of reliable sources. When passing along "traditional" information that lacks a historical foundation, Bede takes care to note it as such.[15]

The De Excidio et Conquestu Britanniae by Gildas (c. 516 – 570) is occasionally relevant in that it mentions early people and places also mentioned in the literary and historical sources. The work was intended to preach Christianity to Gildas' contemporaries and was not meant to be a history. It is one of the few contemporary accounts of his era to have survived.

The Historia Regum Britanniae of Geoffrey of Monmouth is disparaged as pseudohistory, though it looms large as a source for the largely fictional romantic stories known collectively as the Matter of Britain. The lack of historical value attributed to the Historia lies only partly in the fact that it contains so many fictions and falsifications of history;[note 4] the fact that historical accuracy clearly was not a consideration in its creation makes any references to actual people and places no more than a literary convenience.

The Iolo Manuscripts are a collection of manuscripts presented in the early 19th century by Edward Williams, who is better known as Iolo Morganwg. Containing various tales, anecdotal material and elaborate genealogies that connect virtually everyone of note with everyone else of note (and with many connections to Arthur and Iolo's native region of Morgannwg), they were at first accepted as genuine, but have since been shown to be an assortment of forged or doctored manuscripts, transcriptions, and fantasies, mainly invented by Iolo himself. A list of works tainted by their reliance on the material presented by Iolo (sometimes without attribution) would be quite long.

Places in the Old North that are mentioned as kingdoms in the literary and historical sources include:

Minor kingdoms and other regions

Several regions are mentioned in the sources, assumed to be notable regions within one of the kingdoms if not separate kingdoms themselves:

Kingdoms that were not part of the Old North but are part of its history include:

The following names appear in historical and literary sources, but it is unknown whether or not they refer to British kingdoms and regions of the Hen Ogledd.