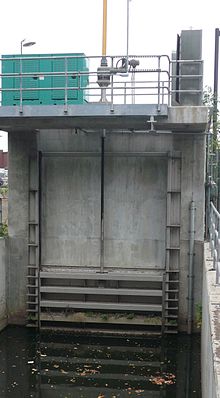 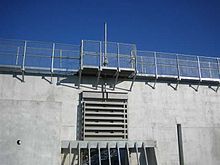 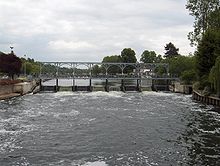 Sluice gates near Henley, on the River Thames. 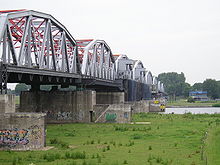 Combination of sluice gates and canal lock under bridge Grave.

A small wooden sluice in Magome, Japan, used to power a waterwheel.

A sluice is a water channel that is controlled at its head by a gate (from the Dutch word 'sluis'). For example, a millrace is a sluice that channels water toward a water mill. The terms "sluice gate", "knife gate", and "slide gate" are used interchangeably in the water/wastewater control industry.

A sluice gate is traditionally a wooden or metal plate that slides in grooves in the sides of the channel. Sluice gates are commonly used to control water levels and flow rates in rivers and canals. They are also used in wastewater treatment plants and to recover minerals in mining operations, and in watermills.

The term sluice gate refers to any gate that operates by allowing water to flow under it. When a sluice gate is fully lowered, water sometimes spills over the top, in which case the gate operates as a weir.

Usually, a mechanism drives the sluice gate up or down. This may be a simple, hand-operated, worm drive or rack-and-pinion drive, or it may be electrically or hydraulically powered.

Flap sluice gate
A fully automatic type, which is controlled by the pressure head across it; operation is similar to that of a check valve. It is a gate hinged at the top. When pressure is from one side, the gate is kept closed; a pressure from the other side opens the sluice when a threshold pressure is surpassed.
Vertical rising sluice gate
A plate sliding in the vertical direction, controlled by machinery.
Radial sluice gate
A structure, where a small part of a cylindrical surface serves as the gate, supported by radial constructions going through the cylinder's radius. On occasion, a counterweight is provided.
Rising sector sluice gate
Also a part of a cylindrical surface, which rests at the bottom of the channel and rises by rotating around its centre.
Needle sluice
A sluice formed by a number of thin needles held against a solid frame through water pressure as in a needle dam.

The gates of a Guillotine lock work in a way similar to a sluice gate, but most canal lock gates are hinged to swing like doors.

In the Somerset Levels, sluice gates are known as clyse[1] or clyce.[2][3] Most of the inhabitants of Guyana refer to sluices as kokers.

In the mountains of New England, sluices were used to transport logs from steep hillsides to downslope sawmill ponds or yarding areas. Nineteenth-century logging was traditionally a winter activity for men who spent summers working on farms. Water was applied to logging sluices every night so a fresh coating of slippery ice would reduce friction of logs placed in the sluice the following morning.[4]

Sluice boxes are often used in the recovery of black sands, gold, and other minerals from placer deposits during placer mining operations. They may be small-scale, as used in prospecting, or much larger, as in commercial operations, where the material is first screened using a trommel or screening plant. Typical sluices have transverse riffles over a carpet, which trap the heavy minerals, gemstones, and other valuable minerals. The result is a concentrate.