An airfield traffic pattern is a standard path followed by aircraft when taking off or landing, while maintaining visual contact with the airfield.

At an airport, the pattern (or circuit in the Commonwealth) is a standard path for coordinating air traffic. It differs from "straight-in approaches" and "direct climb-outs" in that aircraft using a traffic pattern remain close to the airport. Patterns are usually employed at small general aviation (GA) airfields and military airbases. Many large controlled airports avoid the system, unless there is GA activity as well as commercial flights. However, some kind of a pattern may be used at airports in some cases, such as when an aircraft is required to go around — but this kind of pattern at controlled airports may be very different in form, shape and purpose to the standard traffic pattern as used at GA airports.

Pilots prefer to take off and land facing into the wind. This has the effect of reducing the aircraft's speed over the ground (for the same given airspeed) and hence reducing the distance required to perform either maneuver.

The exception to this rule is at alpine airports (altiports) where the runway is on a severe slope. In these instances, takeoffs are usually made downhill and landings uphill, with the slope aiding in acceleration and deceleration.

Many airfields have runways facing a variety of directions. The purpose of this is to provide arriving aircraft with the best runway to land on, according to the wind direction. Runway orientation is determined from historical data of the prevailing winds in the area. This is especially important for single-runway airports that don't have the option of a second runway pointed in an alternative direction. A common scenario is to have two runways arranged at or close to 90 degrees to one another, so that aircraft can always find a suitable runway. Almost all runways are reversible, and aircraft use whichever runway in whichever direction is best suited to the wind. In light and variable wind conditions, the direction of the runway in use might change several times during the day.

Traffic patterns can be defined as left-hand or right-hand, according to which way the turns in the pattern are performed. They are usually left-hand turns because most small airplanes are piloted from the left seat (or the senior pilot or pilot-in-command sits in the left seat), and so the pilot has better visibility out the left window. Right-hand patterns will be set up for parallel runways, for noise abatement or because of ground features (such as terrain, towers, etc.). In USA, the non-standard (i.e. right-hand) patterns are noted in the Airport/Facilities Directory or on a sectional chart, in other countries they may be indicated in that nation's similar document, e.g. Canada Flight Supplement. Unless explicitly indicated otherwise, all traffic patterns at non-towered airports are to the left.

Helicopters are encouraged, but not required, to use an opposite pattern from fixed-wing traffic due to their slower speed and greater maneuverability.

Because the active runway is chosen to meet the wind at the nearest angle (with take-offs and landings upwind), the pattern orientation also depends on wind direction. Patterns are typically rectangular in basic shape, and include the runway along one long side of the rectangle. Each leg of the pattern has a particular name:[1]

While many airfields operate a completely standard pattern, in other cases it will be modified according to need. For example, military airfields often dispense with the crosswind and base legs, but rather fly these as circular arcs directly joining the upwind and downwind sections.

Procedures in the pattern

Aircraft are expected to join and leave the pattern, following the pattern already in use. Sometimes this will be at the discretion of the pilot, while at other times the pilot will be directed by air traffic control.

There are conventions for joining the pattern, used in different jurisdictions.

Similarly, there are conventions for departing the pattern.

There is also a procedure known as an "orbit", where an aircraft flies a 360° loop either clockwise or anticlockwise. This is usually to allow greater separation with other traffic ahead in the pattern. This can be the result of a controller's instruction. If at the pilot's initiative, the pilot will report e.g. "(tail ID number or flight number) making one left-hand orbit, will advise complete".

In cases where two or more parallel runways are in operation concurrently, the aircraft operating on the outermost runways are required to perform their patterns in a direction which will not conflict with the other runways. Thus, one runway may be operating with a left-hand pattern direction, and the other one will be operating with a right-hand pattern direction. This allows aircraft to maintain maximum separation during their patterns, however it is important that the aircraft do not stray past the centerline of the runway when joining the final leg, so as to avoid potential collisions. If three or more parallel runways exist, as is the case at Bankstown Airport in Australia, then the middle runway(s) can, for obvious reasons, only be used when either a straight in approach is used or when the aircraft joins the pattern from a very wide base leg.

An airfield will define a circuit height or pattern altitude, that is, a nominal level above the field at which pilots are required (recommended in the US, FAA AC90-66A Para. 8c [2] )to fly while in the circuit. Unless otherwise specified, the standard recommended pattern height is 1000 ft AGL (above ground level), although a pattern height of 800 feet above ground level is relatively common. Helicopters usually fly their pattern at 500 feet above ground level. Extreme caution is exercised by pilots flying the published traffic pattern altitude as this may contribute to mid air collisions. 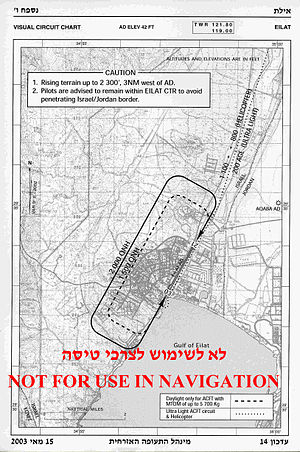 The use of a pattern at airfields is for air safety. By using a consistent flight pattern pilots will know from where to expect other air traffic, and be able to see it and avoid it. Pilots flying under Visual Flight Rules (VFR) may not be separated by air traffic control, so this consistent predictable pattern is a vital way to keep things orderly. At tower-controlled airports air traffic control (ATC) may provide traffic advisories for VFR flights on a work-load permitting basis.

A pilot undergoing training will often fly many patterns, one after another. Usually, each landing is followed immediately by a take off and further pattern; this is called a touch and go. Pilots executing Touch and Go landings should declare the intention to do so when calling the final approach leg. After landing and once airborne again the Touch and Go pilot should declare that the aircraft is On the Go. The pilot should not declare that the aircraft is on an Upwind as that term is not applicable to non-towered airports and is not appropriate for aircraft departing from a runway end.

Helicopter pilots also prefer to land facing the wind and are often asked to fly a pattern on arrival or departure. Many airfields operate a special pattern for helicopters to take account of their low airspeed. This is usually a mirror image of the fixed-wing pattern, and often at a slightly lower standard height above surface level; as noted above this altitude is usually 500 feet above ground level. However due to helicopters' unique maneuverability, helicopter pilots often choose not to enter the pattern, and make a direct approach to the helipad or apron they wish to land on.

If an aircraft intending to land must be delayed, the air traffic control (ATC) may decide to place it in a holding pattern until the airport is prepared to permit the landing. Commercial aircraft on hold will generally fly slow, racetrack-shaped patterns which differ considerably from the airfield traffic pattern that will be commenced once the approval has been given to land. Although an aircraft in a holding pattern may similarly circle the airport, ATC may designate a distant location in which to circle.