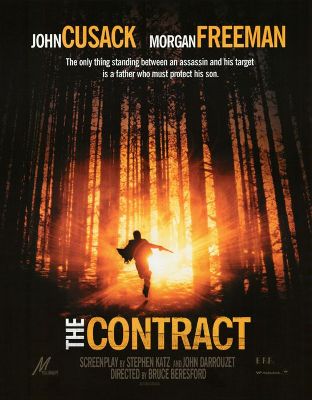 "The Contract" is a 2006 film directed by and written by late television scribe and John Darrouzet. A cat-and-mouse thriller, "The Contract" stars Oscar-winner as assassin Frank Carden, and as mild-mannered teacher Ray Keene. Released directly to video in the and most of Europe, "The Contract" received little critical notice, despite its high-profile cast.

is Frank Carden, a professional assassin who has been hired to kill a reclusive billionaire named Lydell Hammond, Sr. Carden's plan goes awry when he gets injured in a random car accident and ends up in the hospital. Upon seeing the gun he carries, the hospital staff calls in the local police who are able to peel away his false identity and call for the Federal Marshals to come pick him up.

is Ray Keene, a high-school gym teacher, ex-cop, and well-intentioned but not very able dad to Chris (), a teen who's gone downhill behavior-wise since the death of his mother from cancer. Ray belatedly realizes the need to bond with his son when the latter gets caught smoking pot, and therefore takes him hiking in the wilderness. Carden is being driven through that same wilderness by the Marshals, but his men stage a rescue attempt and most of the Marshals end up dead; the last remaining one lives long enough for their car to go off the road, down a steep embankment, and into the river, from which Keene pulls him and Carden just in time for the Marshal to ask Keene to take the prisoner to the authorities before dying of his injuries. Ray and Chris have to get Carden out of the wilderness and handed over to the authorities before his men, highly-skilled ex-military thugs, can track them down, rescue Carden and kill the Keenes.

The film was shot almost exclusively in and the central headquarters () served as one of the main sets.