Owasippe Scout Reservation (OSR), located in Twin Lake, Michigan is the resident camp operated by the Chicago Area Council of the Boy Scouts of America. It began in 1911 as Camp White on 40 acres (160,000 m2) of land on Crystal Lake donated by the White Lake Chamber of Commerce. It is the United States' oldest and longest continuously operating Boy Scout camp.[1] At its peak of use the reservation covered 11,000 acres (45 km²) and served over 10,000 scouts per summer, but the overall decline in Scouting nationwide has seen yearly attendance fall to approximately 3,800 campers. Previous property consolidations has left the camp at 4,800 acres (19 km²) in size, and the council was attempting to sell the camp but met with stiff resistance from the local community, Scouts, leaders, families, and staff alumni. The deal with the developer was terminated on November 07, 2008.[2]

Owasippe Scout Reservation lies within the boundaries of Manistee National Forest in Blue Lake Township, Muskegon County, West-Central Michigan. The Northeast border of the camp is formed in part by the White River.

Campers are able to go into the town of Whitehall to enjoy non-camp activities such as mini-golf, movie theaters, beaches, etc. Muskegon is close by and offers many stores and restaurants to enjoy. A theme park, Michigan's Adventure, is also nearby.

The Administration Center, or "Ad Center", houses the support services for the reservation's section camps. It includes the administration building itself, a softball field, the maintenance building, the food preparation building, the main trading post, warehouse, E. Urner Goodman Scout Museum, and Health Lodge. While summer camp is in session, all units staying at Owasippe arrive at the Ad Center first before proceeding to their respective camps for the week.

The wetland known as the Quaking Bogs is an area of great environmental importance. The bogs, which are actually a fen, are an area where vegetation and soil a few feet deep have covered over a small lake. As such, the ground bounces slightly as one walks upon it. Also near the bogs is an area of natural quicksand. The Bogs are located East of Camp Reneker. 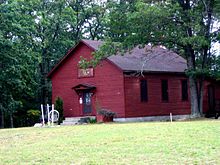 Owasippe is home to the E. Urner Goodman Scout Museum, which is housed in the old Blue Lake Township hall. It contains many artifacts and memorabilia from the history of Owasippe and Scouting. The museum is part of the Administration Center complex.

As of the 2008 season the museum now features a dedicated art section featuring many works of art in almost all media. This was done to allow Scouts to complete Art merit badge.

One of the few locations on the Owasippe property that has never been clear-cut, Paradise Valley is home to the most-visited of the reservation's freshwater springs. The Red Trail, which starts in nearby Camp Blackhawk (Go!), travels the length of the valley alongside its spring-fed stream. The stream itself empties into Cleveland Creek at the Western end of the valley.

In 2002, the Nature Conservancy organized a BioBlitz to catalog the species of flora and fauna on the Reservation, and later produced a report listing the various species that were found. Owasippe is known to be one of the last locations in Michigan which hosts the oak savanna, a rare ecosystem, and the coastal plain marsh, which hosts unique flower and fauna dependent on acidic soils.

In early 2006 The Nature Conservancy further noted that the BioBlitz of 2002 was not the definitive work on the species within Owasippe. It is reasonable to assume that other species, those not particularly evident during the two weekends of the Bioblitz, were missed in the accounting of species. 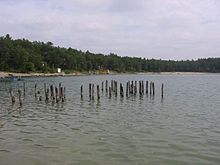 The original Boy Scout camp was established in 1911 at Crystal Lake outside Whitehall, Michigan. Accounts differ concerning the original name with consideration being given to Camp White and Camp Owasippe. The first documented reference to Owasippe in relationship to the camp was in 1916 when Camp Master James P. Fitch originated the "Tribe of Owasippe" for those Scouts who had attended camp one or more times since 1912.

In 1912, the first of a continuing legacy of "Family Camps" was established for families visiting Scouts at camp. The accommodations were located at a farmhouse about two miles (3 km) southwest of the camp.

In 1920, pressure was being felt by the Chicago Council for the operation of a camp for each of the Districts of the Council. In addition to the North Shore District camp on Crystal Lake camps operating for the Scouts of the other Districts included Camp Keesus at Grand Haven, Michigan for the Hyde Park and Woodlawn Districts, Camp Checaugau at Palatine, Illinois for the Northwest District, and Camp Shabbona on the Des Plaines River in Illinois for the West Side District.

In 1922, Camp West and Camp McDonald were established at Crystal Lake, Michigan and the original camp name was changed to Camp Beard. At that time the collective properties were known as the A. Stamford White Owasippe Scout Camps.

For most of its history, Owasippe has been an evolution of semi-autonomous section camps. It is common for each section camp to offer the standard summer camp program. However, differences in location, food preparation, program activities, and swimming accommodations contribute to the unique atmosphere of each former and current camp. Each camp also has their own song(s) and multiple program areas such as handicraft, aquatics, nature, Scoutcraft, shooting sports, and Pathfinders (first-year Boy Scout campers).

Camp Blackhawk "Go!" is used as a summer camp by units staying for one or two weeks. There are twenty sites within Blackhawk. Sites 1-8 are known as the Wilderness sites, which are so named as they used to form Camp Wilderness before the current Dining Hall was built. Sites 9-15 are known as the Checaugau sites, which is a reference to the legend of Chief Owasippe and his sons. Sites 16-20 are known as the Pioneer sites. Blackhawk is the only camp on the reservation to serve meals in a dining hall, although the meals are prepared at the Food Preparation Center and shipped three times daily. Situated on Big Blue Lake, the Blackhawk is also one of two camps on the property to have its swimming area in a lake rather than a pool. Blackhawk is also home to the Steve Fossett Sailing Base.

Camp Crown, named after Robert Crown, is used as a base for the council's high adventure program. High Adventure, or "Hi-Ad", includes Space Exploration Outpost, Shotgun Outpost, Action Paintball, Project C.O.P.E., Horse Ranch, Tubing and Canoeing trips on the White River, and the Manistee Quest trek program. Campers are able to partake in these activities while stationed at any of the section camps.

The Charles Nagel C.O.P.E. Course is the reservation's Project COPE facility. Also at the C.O.P.E. Base is a 30 ft (9.1 m) high climbing wall known as the Chris Hill Memorial Climbing Tower. The Climbing Merit Badge is also offered at this area.

Owasippe's equestrian programs are housed at the Horse Ranch, also known as the Diamond-O Ranch. There are many routes and trails near the corral which are used for trail rides and for teaching the Horsemanship merit badge. Also available is the Wrangler Outpost, which gives Scouts a cowboy-like experience learning lessons of how to care for a horse, eating a steak dinner, and sleeping under the stars.

The Manistee Quest is a guided off-reservation backpack and/or canoe trek program utilizing a 100-mile (160 km) section of the North Country Trail that traverses the Manistee National Forest and intersecting navigable rivers. Crews of no more than 12 older Scouts and adult leaders go on a week-long excursion fully equipped with all provisions for that time frame on a wilderness route planned and organized by their youth leadership.

Camp Reneker, sometimes known as Reneker Family Camp or simply "Family Camp", is largely attended by the spouses and non-Boy Scout children of the Scout Leaders who bring their units up to camp, often sacrificing their vacation time to do so. It is named after Robert and Betty Reneker.

Campers are housed in cabins located in two groups, one on each side of where the Camp Lodge once stood. Each side is essentially identical, with 20 cabins, a central bathroom/shower area with 6 bathrooms/showers, two washers and dryers, and a playground. Campers are required to do their own cooking and laundry. Each cabin is equipped with 2 bunk beds, a couch, a refrigerator, a stove, and two sinks.

Camp Reneker is run differently than the other section camps as its program is offered to families with adults and children of both genders and various ages rather than to Boy Scouts. There are currently five age groups with programs designed specifically for each. Age group programs run in the morning. In addition, all campers are encouraged to participate in the general program, which runs in the midday and evening. Activities available to campers include swimming in the pool, archery, hiking, BB guns, and crafts.

When the camp was originally built, many of its activities were centered around the Camp Lodge. The lodge was lost during the same string of suspected arson fires that also destroyed the Camp Carlen dining hall and damaged the Camp Blackhawk dining hall. Since the destruction of the lodge, a circus tent set up over the tennis court has doubled as a place for the camp to congregate, while the camp office is now run in a trailer.

The camp's theme phrase, said whenever the camp name is used, is "Zaxie!". It is the combination of Wolverine North's phrase "Zap" and Wolverine South's "Dixie". In 1980, the first year the camp was combined, a theme could not be decided upon so that year's theme was Camp Wolverine "What?".

Meal service at Camp Wolverine is provided to the units in their sites via Hot Packs, which are insulated containers that are dropped off before meal and picked up afterward. The camp office is located in the North Lodge, along with the camp's trading post. The camp's aquatics program features a pool for swimming, as the bed of Lake Wolverine is unable to be cleared. The boating area of the camp is on the lake, alongside the former site of the reservation's Fishing Outpost.

Of note in the camp is its repurposing of various areas of its two predecessor camps. The Lodge, pool, and boating areas of Wolverine North retain their functions, while Wolverine South's Lodge is now the Handicraft area, the boat docks are now the Ecology-Conservation area, and the pool pumphouse now hosts the reservation's Photography Outpost as the pool has been filled in.

Camps that have been sold off or closed include Camps Bass Lake, Bel-Nap, Beard, Stuart, and West. 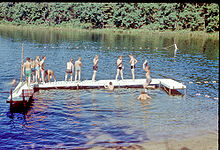 The Bass Lake lone troop Scout camp was a single camp on a small (approximately 600 feet (180 m) wide) lake on the Owasippe reservation. A single troop would take over the entire camp, usually for a two week period, preparing all their own food and overseeing all aspects of the camp life. While active in the 1950s and 1960s, Camp Bass Lake is no longer in use.

Formerly known as Camp Sauger Lake, this camp hosts a Venturing Base, and recently it has begun hosting several weeks of Webelos camp near the end of summer. It is located on the same access road as Camp Crown. It was closed to due to poor attendance. The camp was renamed upon the building of a dining hall, which burned down in a suspected arson fire. Meals are now served in a large pavilion. Camp Carlen's call is "Overall!" Camp Carlen, like many of the section camps had its own song as well.

While technically not a section camp, Camp Hiawatha Beach is a lone troop camp offered for those units who wish to run their own summer camp experience.