Korean Air takes delivery of its first Airbus A380 at Toulouse-Blagnac Airport, France, 25th May 2011.

Korean Air was founded by the South Korean government in 1962 as Korean Air Lines to replace Korean National Airlines,which was founded in 1946. On 1 March 1969 the Hanjin Transport Group took control of the fledgling airline. Long-haul freight operations were introduced on 26 April 1971 followed by passenger services to Los Angeles International Airport(LAX) on 19 April 1972.[2]

International flights to Hong Kong, Taiwan, and Los Angeles were flown with Boeing 707s until the introduction of Boeing 747 in 1973. In 1973, KAL introduced Boeing 747s on their Pacific routes and started a European service to Paris using the 707 and DC-10. In 1975 KAL became one of Airbus's first Asian customers with the purchase of three A300s, which were put into immediate service on Asian routes.[5]

A blue-top, silver and redesigned livery with a new corporate "Korean Air" logo featuring an accented, stylized "taegeukgi" design was introduced on 1 March 1984 and the airline's name changed to Korean Air from Korean Air Lines. This livery was introduced on its Fokker F28s. It was designed in cooperation between Korean Air and Boeing. In 1990s Korean Air became the first airline to use the new MD-11 to supplement its new fleet of Boeing 747-400s. However, MD-11 did not meet the set performance and they were converted to freighters (in addition to 747 freighters).

As of 2007, Korean Air was in negotiations to open its China hub in Beijing or Shanghai by the end of 2008.

The airline has 16,623 employees (as of March 2007).[2] On 5 June 2007, Korean Air said that it would create a new low-cost carrier in Korea to compete with Korea's KTX super-high speed railway network system, which offers cheaper fares and less stringent security procedures compared to air travel. Korean Air's low-cost subsidiary is Jin Air, which started its scheduled passenger service from Seoul to Jeju on 17 July 2008. Korean Air announced that some of its B737s and A300s would be given to Jin air.

In the 1980s Korean Air's head office was in the KAL Building on Namdaemunno, Jung-gu, Seoul.[6]

By 2009 Korean Air's image had become more prestigious, differing from the image of the late 1990s, which was tarnished by several fatal accidents.[7]

In mid-2010, a co-marketing deal with games company Blizzard Entertainment sent a B747-400 and a B737-900 taking to the skies wrapped in StarCraft II branding.[8] In August 2010, Korean Air announced heavy second-quarter losses despite record high revenue.[9] Also in August 2010, Hanjin Group (the parent of Korean) opened a new cargo terminal at Navoi in Uzbekistan, which will become a cargo hub with regular Incheon-Navoi-Milan flights.[10]

In May 2011, the carrier took delivery of its first Airbus A380, and signed a deal with Amadeus IT Group that outsourced the carrier's reservation and passenger processing systems.[11][12] 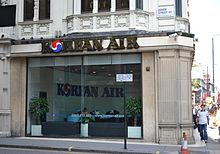 Korean Air has codeshare agreements, beside SkyTeam members, with the following airlines:

Korean Air is an airline partner of Skywards, the frequent-flyer program for Emirates. Skywards members can earn miles for flying Korean Air and can redeem miles for free flights. In addition, on certain routes Korean Air's codesharing agreement with Malaysia Airlines also allows Malaysia Airline's Enrich members to earn miles even though when flying with Korean Air.[citation needed]

The North America headquarters for passenger operations is located in Westlake, Los Angeles, United States, while its cargo operations for North America are on the property of Los Angeles International Airport in Westchester, Los Angeles.[14] The European headquarters are located in the City of Westminster, London.[15] The Paris office is in the 1st arrondissement of Paris.[16] The Germany office is in Westend, Frankfurt.[17] The Commonwealth of Independent States headquarters are located in Tverskoy District, Central Administrative Okrug, Moscow, Russia.[18] Its Southeast Asia/Oceania headquarters are in the Ocean Tower (海洋大楼 Hǎiyáng Dàlóu) in Singapore.[19] Its Japan headquarters are in the Tokyo Korean Air Building (KALビル, KAL Biru?) in Shiba, Minato, Tokyo.[20] Its China offices are in the Hyundai Motor Tower (现代汽车大厦 Xiàndài qìchē dàshà) in Chaoyang District, Beijing.[21] Its Hong Kong sales office is in Tower 2 of the South Seas Center (南洋中心 Mandarin: Nányáng Zhōngxīn) in Kowloon.[22] 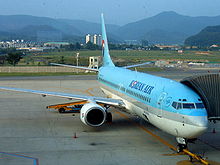 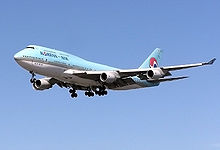 The Korean Air Boeing customer code is B5; hence, any aircraft purchased directly from Boeing features this code in registration (747-400 - 747-4B5).

Korean Air is the first Airbus A380 customer to dedicate the entire upper deck of the A380 to business class passengers (comprising 94 of Korean Air’s lie-flat Prestige Class business seating). Korean Air announced on 4 December 2009 that it would order five Boeing 747-8 Intercontinental aircraft worth $1.5 billion in list prices.[29] This is in addition to the seven Boeing 747-8F freighters Korean Air Cargo will be operating.[30] 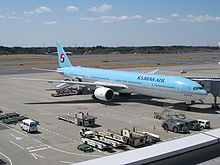 A Boeing 777-300 being serviced at Narita International Airport

The brand new first class, the "Kosmo Suite" seats, and the business class, "Prestige Sleeper" seats were first introduced in the Boeing 777-300ERs in May 2009.[31] Both seats could stretch to 180 degrees, and became more private than seats before.

The color 'Celadon Green', which represents the characteristics of Korea, is incorporated as the primary dominant colors to all "First Class" and "Prestige Class" seats. Dark blue and Mocha Chocolate colors are used in economy seats.

The Korean Air Airbus A380-800 aircraft also feature an in-flight bar, called the Celestial Bar in partnership with Absolut Vodka, featuring a range of Absolut cocktails along with an integrated lounge space.[32] It is located on the upper deck Business Class cabin and accessible only to First and Prestige class passengers. On the lower deck of the A380, there is a Lancome-designed[33] Duty Free shop located in the rear of the cabin as well which is available to all passengers.

SKYPASS is the frequent-flyer program of Korean Air. "SKYPASS" also refers to the blue card which Korean Air frequent flyers are given. The motto of SKYPASS is "Beyond your Imagination". The program's elite levels are comparable to those of other airlines' frequent flyer programs, requiring members to fly a 30,000 miles per two-year cycle.(initial entry into this level requires 50,000 miles) Qualification for the highest level is based on lifetime flight miles, requiring a customer to fly 1 million miles for Million Miler, which is the highest elite status, or 500,000 miles for Morning Calm Premium, which comes second. Both membership levels are eligible for SkyTeam Elite Plus privileges. Membership in these levels are granted for life.

Korean Air is also involved in aerospace research and manufacturing. The division, known as the Korean Air Aerospace Division (KAL-ASD), manufactures licensed versions of the MD 500 and UH-60 Black Hawk helicopters and the F-5E/F Tiger II fighter aircraft,[34] the aft fuselage and wings for the KF-16 fighter aircraft manufactured by Korean Aerospace Industries,[35] and parts for various commercial aircraft including the Boeing 737, 747, 777, 787 and the Airbus A330, and A380.[36] In 1991 the division designed and flew the Korean Air Chang-Gong 91 light aircraft. KAA also provides aircraft maintenance support for the United States Department of Defense in Asia and maintains a research division with focuses on launch vehicle, satellite, commercial and military aircraft, helicopter, and simulation systems.[37]

Korean Air had many fatal accidents between 1970 and 1999, during which time it wrote off 16 aircraft in serious incidents and accidents with the loss of 700 lives. On Sept. 1, 1983, Korean Air Lines Flight 007, carrying 269 people, including a sitting U.S. Congressman, Larry McDonald, was shot down by the Soviets west of Sakhalin Island. Since the last fatality in 1999, safety has greatly improved.[38] The last fatal passenger incident was the Korean Air Flight 801 crash in 1997. The latest crew fatality was Korean Air Cargo flight 8509 in December 1999.