First American Financial Corporation (NYSE: FAF) is a United States financial services company and is a leading provider of title insurance and settlement services to the real estate and mortgage industries.

First American offers its products and services directly and through its agents and partners throughout the United States and in more than 60 countries.

First American traces its roots to 1889, when Orange County, California—a rural, undeveloped area at the time—split off from the county of Los Angeles. Two firms opened to handle title matters in the brand-new county. Five years later, Charles Edward Parker (C.E. Parker), a local businessman, succeeded in merging the two competitors into a single entity—Orange County Title Company. C.E. Parker became the president of Orange County Title, which, starting in 1909, would pay a cash dividend every year for the rest of the century and would become one of the first abstract companies in California to qualify to issue title insurance policies.[2] 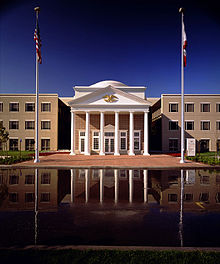 Parker S. Kennedy, the son of D.P. Kennedy was named president of First American Title in 1989 and assumed the presidency of the parent corporation in 1993. On December 3, 1993, the company moved its shares to the New York Stock Exchange.

Today, the company continues to be commonly referred to as First American and serves homebuyers and sellers, real estate professionals, loan originators and servicers, commercial property professionals, homebuilders, and others involved in residential and commercial property transactions with products and services specific to their businesses. Those services include title insurance and closing/settlement services; property data, and title plant records and images; home warranties; property and casualty insurance; and banking, trust, and advisory services.

June 1, 2010 marked the separation of the First American Corporation's financial services operations and its information solutions businesses into two independent public companies.[3] The spin-off was intended to allow First American to focus solely on its core businesses.

First American Data Tree is the US nation’s leading providers of public and digital land records and property information, offering a nation wide database of over 4 billion property recorded land documents of 900 plus counties. .[5]

Data Trace is a title technology company that provides a standardized title and tax information system that spans the nation and empowers title insurance companies to streamline order processing and title production.

FAF International is the international division of First American Financial Corporation and is the leading provider of title insurance and a broad range of related property and financial services to both corporate clients and consumers around the world.

First American Thrift is a Federal Deposit Insurance Corporation-insured industrial bank which specializes in loans secured by commercial property in Southern California. The thrift, which has a single branch located in Orange, California, offers a liquid account which pays the current T-bill rate.

First American Home Buyers Protection is a leading provider of home warranties offering homebuyers and homesellers protection against repairs and replacement on their homes’ essential systems and appliances through service provided by a large network of pre-screened and qualified contractors and technicians.

In 2001, First American established First Indian Corporation Private Limited (FIC), to serve as its offshore provider of technology, transaction and analytics services to the Real Estate and Mortgage Industry. First Indian had more than 4,000 professionals working out of offices in Bangalore, Hyderabad and Mangalore.