Infobox Film
name = The Other 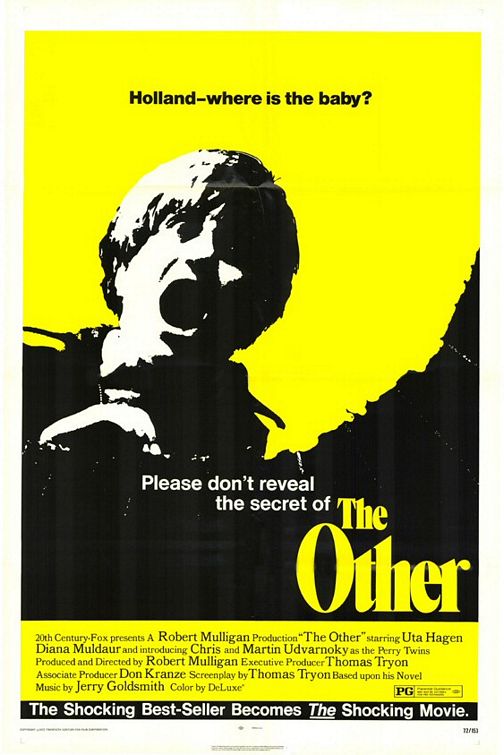 "The Other" is a chiller directed by , adapted for film by , from his bestselling novel. It stars , , and Chris & Martin Udvarnoky.

It's a seemingly idyllic summer in , and identical twins Niles and Holland Perry play around the bucolic family farm. We see the daily activities of the farm through the eyes of the eleven year old boys. Elder Holland is clearly the amoral mischief maker, though sympathetic Niles is often caught in their shenanigans. Niles carries a Prince Albert tobacco tin with several secret trinkets, including the Perry family ring, which came down from their grandfather, and something mysteriously wrapped in wax paper. He asks Holland to "take them back," but Holland insists "I gave them to you, they're yours now." Their cousin Russell finds the boys in the forbidden apple cellar, and promises to snitch on them.

Their mother is a recluse in her upstairs bedroom, grieving over the recent death of the boys' father in the apple cellar. Grandmother Ada, a Russian emigrant, dotes on Niles, and has taught him a psychic ability to project himself outside of his body, for example in a bird, "the great game."

As the summer progresses, Holland appears to play some deadly practical jokes. A pitchfork left in the hayloft takes the life of their sneering cousin Russell before he can betray their secret hideaway in the apple cellar. A frightening magic trick for nearby spinster Mrs. Rowe causes her to have a fatal heart attack. After Russell's funeral, Niles' mother finds the ring, and the severed finger that is wrapped in wax paper. That night she demands Niles to tell her how he has taken possession of father's ring. "Holland gave it to me," he answers. She's shocked, and asks him "when" he gave it to Niles. "In the parlor, after our birthday," he answers. Holland appears, whispering, "Give it back!" After a struggle on the landing over the ring, she falls down the stairs and is rendered partially paralyzed.

Ada finds Holland's harmonica at Mrs. Rowe's house after her body is discovered. Finding Niles in church, transfixed by the image of "The Angel of a Better Day," she asks Niles about Mrs. Rowe, and he identifies Holland as the culprit. Ada drags Niles to the family graveyard and demands that Niles face the truth: "Holland has been dead" since their birthday in March, when he fell down the well. He was thought to have been buried with his father's ring ... which we know to be in Niles' possession. At home, Ada blames herself for teaching Niles "the game," but insists that he not play it anymore. But Niles continues to talk with Holland. Holland helps Niles to remember how he got his father's ring: Holland insisted that he cut his finger off while he lay in his casket in the parlor. In the stairway, Ada hears Niles whispering....

More tragedy strikes the family. During a storm, Rider and Torrie's newborn baby is kidnapped, a copycat of the recent Lindbergh tragedy. (News about the trial is seen in a newspaper, and Niles has a crayon portrait of in his bedroom.) As the adults mount a search for the baby, Niles sneaks off to the barn. Aunt Ada suspects that Niles knows more than he's letting on. When she discovers Niles in the barn, pleading for Holland to tell him where the baby is, she fears that Niles is beyond hope. She insists that he, Niles, has done all these things, but he refuses to believe her. The baby is found, drowned in one of Mr. Angelini's wine casks, and they apprehend the handyman. Returning to the barn and shutting the door, Ada hears Niles in the apple cellar where the boys like to hide, whispering with Holland. She empties a gas can into the apple cellar, and, clutching an oil lantern, dives into the cellar, starting a cataclysmic fire.

As autumn begins, the ruins of the barn are being cleared. The camera jumps in on a padlock that has been cut open with a bolt-cutter. We thus find that Niles is alive and well. His mother is a catatonic invalid, Ada has died in the barn fire, and no one knows Niles's terrible secret.

When the film aired on in the 1970s, a voiceover at the end of the film has Niles speaking to Holland: "Holland, the game's over. We can't play the game anymore. But when the sheriff comes, I'll ask him if we can play it in our new home." The voiceover deliberately truncates a line by the maid, Winnie, who in the theatrical cut says, "Niles, wash up now - time for lunch," whereas in the voiceover version is cut off after merely "Niles, wash up now." The obvious implication of the voiceover version is that Niles has been found out and is on the way to being institutionalized. This "happier" ending was presumably given to the television version to ensure that the villain not get away with his crimes, though interestingly it does bring the film closer to the book, which Niles narrates from an asylum. The voiceover is not on the home video releases nor has it appeared on any recent television airing.

The movie follows the book fairly closely, which is unsurprising as Tryon adapted his own novel, but the ending does feature some important changes. In the book, it is Mr. Angelini who learns that Niles killed the baby and who placed the pitchfork in the hay; Mr. Angelini is never charged and is a trusted employee. In the film Angelini is falsely assumed to be the murderer, and in her delirium Ada commits her suicidal act before revealing his innocence. The movie even adds animosity toward Angelini on the part of Aunt Vee, who clearly blames him for the death of her son, Russell. The book contains a frame narrative by an adult Niles in an asylum. The movie however ends with the disturbed Niles under no suspicion and thus being free to cause more tragedy.

* makes one of his earliest appearances in this film, as the boys' brother-in-law, Rider Gannon. Ritter appeared as Father Matthew Fordwick on ; coincidentally film-music composer also scored the TV series' theme, as well as the soundtrack for "The Other".
*Rider's young wife and the twins' sister, Torrie, is played by , who, at the time, was married to singer-songwriter of fame.
*This is the only movie appearance by the twins Chris and , the featured stars.
*Though real-life twins played Niles and Holland, director Mulligan never shows the brothers in frame together. They are always separated by a camera pan, or an editing cut.
*The film was shot entirely on location in Murphy's, CA and . Director had hoped to shoot the film on location in Connecticut, where it takes place, but because it was autumn when the film entered production (and therefore the color of the leaves would not reflect the height of summer, when the story takes place) this idea was dropped.
*Though not specified in the credits, Rider's last name is Gannon. In the scene in the movie where Niles runs to the house to alert the family of Mrs. Rowe's death, Niles' sister and Rider's wife Torrie refers to herself as "Torrie Gannon" when on the phone with the constable.
*Despite the grotesque nature of the plot, composer elected to give the film a mostly upbeat score to reflect the childish innocence of its main character. More often than not, the film's darker scenes feature no music at all. Goldsmith's compositions for the film can be heard in a 22 minute suite found on the soundtrack album of . This CD was released 25 years after the release of the film. According to the liner notes of the soundtrack, over half of Goldsmith's music was removed during the film's post production. It does not specify whether this was the result of deleted footage or a decision affecting the music only.
*Though the film experienced a quiet theatrical run, it has found a devoted audience over the years after regular television airings in the late 70s.
*Throughout the film, reference is occasionally made to Ada's pain pills, such as when Niles brings them to her in the church and near the end of the film when he reveals to her that "Holland" had put them in her tea to put her to sleep. In the book it is explained that Ada suffers from severe toothaches, and the pain pills are to help alleviate them.
*Many of the book's smaller details managed to make their way to the transition to film, such as the blue outlines for the tools in the barn, the portrait of "Mother and Her Boys" in the living room, the design of the scroll on the Chautauqua desk that Niles hides the tobacco tin behind, and the drawing of Chan-yu the magician in Niles' bedroom.