Supertram (Sheffield)
This article is about the modern system. For the original system see Sheffield Tramway.

The Supertram, officially called the Stagecoach Supertram, is a light rail tram system in the City of Sheffield, South Yorkshire, England. It is owned by the South Yorkshire Passenger Transport Executive (SYPTE), who own the infrastructure, and Stagecoach who operate and maintain the vehicles.

Following a parliamentary act in 1985 authorising the scheme, the system was built by SYPTE at a cost of £240 million,[2] and opened in stages between 1994 and 1995. It was initially operated by South Yorkshire Supertram Ltd (SYSL), a wholly owned subsidiary company of SYPTE. After lower than expected passenger revenue, SYSL was sold to Stagecoach for £1.15 million at the end of 1997. With the sale of SYSL, Stagecoach gained the concession to maintain and operate the Supertram trams until 2024.[3]

Launched in an initial light grey livery, following the takeover by Stagecoach the trams wore the Stagecoach corporate livery from 1997. From 2006 the trams were refurbished, and a new dedicated Supertram blue based livery was launched, rolled out by 2008.

Ticketing is integrated with the Stagecoach Sheffield bus operations, purchased by Stagecoach in 2005. 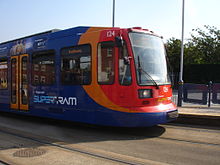 Supertram 124 arriving at Gleadless Townend tram stop, on the Blue Route to Halfway

It runs from Sheffield city centre northwest to Middlewood and Malin Bridge, via the University of Sheffield and Hillsborough; northeast to Meadowhall, via Attercliffe; and southeast to Halfway and Herdings Park, via Norfolk Park, Manor, and Gleadless. Construction started in 1991 and the first section to open was along former heavy rail alignment to Meadowhall on 21 March 1994,[3] shortly after the similar Metrolink scheme in Manchester.

The system consists of a mix of on-street running, reserved right-of-way and former railway alignment. The Middlewood line runs mainly on the street up to the City Centre; the Meadowhall line runs totally on reserved track – from Attercliffe to Meadowhall it runs on former railway line alongside a freight line to Tinsley Yard and the main line at Rotherham Central. The inner part of the Halfway and Herdings Park lines consist of on-street running, with the exception of the viaduct at Granville Road. The Herdings line then runs on reserved track, and the Halfway line crosses into Derbyshire and out again on reserved lines in the countryside. This line also serves Crystal Peaks Shopping Centre.

The three main City Centre stops are located on one side of a former dual carriageway, now a single lane and reserved for buses only. These three stops are served by all routes 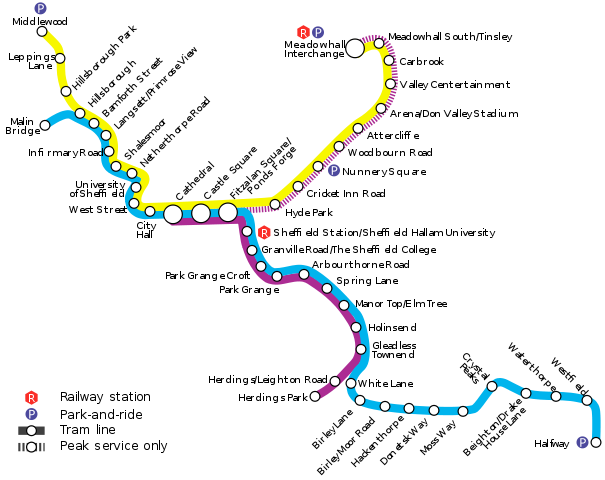 The Stagecoach Supertram network is organised around Park Square and comprises three lines. The lines, with termini at Meadowhall, Halfway and Hillsborough, all serve Sheffield city centre and meet at Park Square where a triangular junction was constructed to provide interchange between lines and operational flexibility. Two small branches serving Malin Bridge, from Hillsborough Interchange, and Herdings Park branch out from two of the main lines.

The Supertram network operates a fleet of 25 three car trams built by Siemens-Duewag of Düsseldorf, Germany in 1992. The trams are capable of carrying 88 seated and 155 standing passengers and are 40% low floor design, the vehicles have been specially designed for gradients as steep as 10%. In the 1980s a design choice was taken to create the longest possible vehicle while avoiding multiple working[4] which resulted in a 34.8m design the 3rd longest tram design in operation in Europe at the time[5] and the longest in service in the UK until the 42.8m long Edinburgh Trams are introduced on the Edinburgh Network. 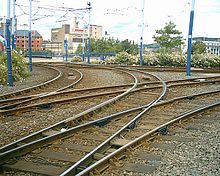 Detail of the Supertram track at Park Square

The network is 18 miles (29 km) long, with 37 miles (60 km) of track.[6] It features two types of track; tramway track where either pedestrians or road traffic share the right of way and ballasted railway track when there are no such requirements. Tramway track consists of a grooved tramway rail set into a concrete base with troughs into which the rails are laid. Most of the track is on-street using 35G-section grooved tram rail, with BS11-80A 80 lb/yd flat-bottom rail elsewhere.[6] The railway track was supplied by British Steel Track Products of Workington and laid on sleepers consisting of concrete blocks with steel ties which gives a spring feeling when travelling on these sections. The track is laid on a bed of ballast which in turn rests on a prepared formation. Street crossings are usually laid with grooved tramway rails.

The overhead line equipment depends on the location. If the tracks are close together, central poles with 'steady' arms on each side are used. If the tracks are further apart, poles on either side with span wire are used. With aesthetics in mind a minimum number of traction poles are used and whenever possible the wire is anchored onto neighbouring buildings. Supertram, Sheffield City Council and landlords were in talks to try and hide anchor points as much as possible and blend them into the structures.

The contact wires are twin cadmium copper ones, twin wires being necessary because of the high installed power rating of the trams (1 megawatt). The regenerative braking on the tram feeds current back into the wires. 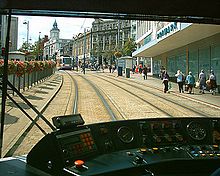 The driving cab of a Stagecoach Supertram, heading towards Castle Square from Ponds Forge/Fitzalan Square.

The rules of operation of the Stagecoach Supertram are similar to those of a traditional railway. The system was operated by South Yorkshire Supertram Operating Company, who employed the staff and operated the depot and signalling and now by Stagecoach Supertram. Unlike normal trains, tramways can be operated without signalling, although block signalling is sometimes necessary on single-line sections. The trams are driven on a line-of-sight basis, so that the tram can be stopped if an obstruction is spotted ahead.

Signals, however, are used to give indications to tram drivers when running on-street and at street crossings. As trams have priority at many places, it was necessary to give them different traffic light phases from motor traffic and therefore different types of indication have to be used from those applicable to motor vehicles. Signal phases for the tramway are specifically modified to account for the length of the tram. The tram signals are usually operated alongside and in conjunction with traffic signals. Signals consist of white lights arranged vertically (for go), horizontally (for stop) and a cross (for caution). Two other light arrangement indicate a point direction at junctions. The five white lights are distinct from those of the standard road traffic lights or railway line-side signals.

Line-side signals give instructions or warnings to tram drivers. To distinguish them from normal road signs, they are diamond-shaped. The most common are speed restrictions which are in miles per hour. These are particularly necessary on road-running where trams travel along with road traffic.

The route a tram is to take is computer-controlled. The route is set on a device in the tram before a journey is started, and on approach to junctions, a signal is sent from the tram to a device known as a VIS loop buried beneath the track. This automatically sets the points in the correct direction. 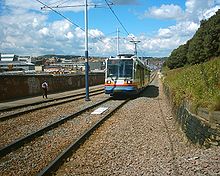 The depot is located at Nunnery Square and occupies the former main line carriage sidings alongside the Sheffield – Lincoln railway line. It was designed and constructed by Balfour Beatty on 2.6 hectares of land and consists of a three-line workshop building, 6 stabling sidings, a turning loop, engineers sidings and sundry equipment. The main offices and reception, supervisor's offices, plant room, staff mess rooms, paint shop, first aid are on the first floor level on the South side of the building. The Southwest of the building is home to the Operations and Power Controller's office, where live control of the running of the service is monitored using SCADA, CCTV and radio contact. The depot substation is also located in the southwest corner, two 600 kVA transformer-rectifiers supply the tramway overhead and a 800 kVA transformer feeds the depot facilities.

In the workshop itself are two through-running lines (numbered 8 and 9) and line 10, a stub end. All lines have inspection pits and line 8 possesses a Hegenscheidt wheel lathe. This machine allows wheel turning whilst both sets of doors are closed. The wheelsets are turned in situ. High level access is provided on lines 9 and 10 for servicing of equipment boxes and pantographs. An automated washing machine is located on line 7. The depot is currently in the process of refurbishing the entire fleet of 25 trams.

The site's security is provided by CCTV and fence guarding and is under control of security personnel housed in the operations centre. Road access is from Woodbourn Road at the end of the depot.

The site was, before the arrival of Supertram, already dedicated to the railway industry, Nunnery engine shed filled most of the site whilst lines of the Midland Railway, Great Central Railway and London and North Eastern Railway irrigated the area and served collieries. 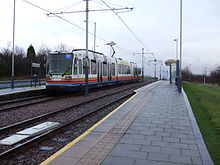 48 tram stops have been built to permit users accessing the Supertram.[7] These are generally found to be 26.5 m in length and 3 m in depth and are of a network-wide standard making them easy to understand and use. The design incorporates recommendations made by the Cranfield Institute of Technology who studied ergonomics for both able-bodied and disabled users.[8]

Tram stops are elevated at 37.5 cm with a 1:20 slope. The platform edge comprises a 60 cm wide and light coloured textured paving with strips of 40 cm wide edge warning tactile strip. Directional guidance tactile paving crosses the width of the platform to coincide with the tram door locations.

The Supertram network possesses a few remarkable structures. Two viaducts and one underpass are of interest: the two viaducts carry Supertram onto Park Square (a major road junction in the centre of the city), one of them being a six-span viaduct, the other the bowstring steel arch Park Square Bridge. The underpass takes the tram underneath the busy A57 roundabout outside the University of Sheffield.

An old Supertram ticket from the pre-Stagecoach days. These have now been replaced by newer tickets

To travel, each ticket had to be validated in a yellow machine on the platform. The ticket defined the type of passenger and trip as tickets do now. On validation, an overprint was added, giving the tramstop code, time and date of validation and the point of validation.

As the machines did not dispense change, nearby shop-owners were often asked for change to purchase tickets from the machines. There were also problems with machine reliability. When Stagecoach took over South Yorkshire Supertram it removed the ticket machines and began selling tickets on board. This meant improved staff presence on board and tickets could be systematically checked.

Unlike other tramway and light rail operators in the UK, Supertram accepts concessionary travel passes issued by any English local authority.[9]

Proposals were made to extend the network to Rotherham, Dore, Fulwood and Hellaby. However, a reduced scheme with extensions to Rotherham and Broomhill[10] failed to gain government funding in 2004.[11]

A new scheme has been announced to connect Supertram to Rotherham by way of electrifying an existing heavy rail line.[12]