The Arabian Oryx was only saved from extinction through a captive breeding program and reintroduction to the wild.[1] The Scimitar Oryx, which is now listed as Extinct in the Wild, also relies on a captive breeding program for its survival.[2] Small populations of several oryx species, such as the Scimitar Oryx, exist in Texas and New Mexico (USA) in wild game ranches. Gemsboks were released at the White Sands Missile Range and have become an invasive species of concern at the adjacent White Sands National Monument.

The term "Oryx" comes from the Greek word Ὂρυξ, Óryx, for a type of antelope. The proper plural form is óryges, although oryxes has been established in English.

The Scimitar Oryx is the only oryx with clearly curved horns, ochre neck, and no dark markings on the legs.

The Arabian Oryx (Oryx leucoryx, Arabic: المها), the smallest species, became extinct in the wild in 1972 from the Arabian Peninsula. It was reintroduced in 1982 in Oman, but poaching has reduced their numbers there. One of the largest populations of Arabian Oryx exists on Sir Bani Yas Island in the United Arab Emirates. Additional populations have been reintroduced in Qatar, Bahrain, Israel, Jordan and Saudi Arabia. As of 2011 the total wild population is over 1000, and 6000–7000 are being held in captivity. In 2011 the IUCN upgraded its status to Vulnerable, the first species to have come back from Extinct in the Wild to Vulnerable status.[1][3]

The Scimitar Oryx, also called Scimitar-horned Oryx (Oryx dammah), of North Africa is now listed as possibly Extinct in the Wild. However, there are unconfirmed reports of surviving populations in central Niger and Chad, and a semi-wild population currently inhabiting a fenced nature reserve in Tunisia is being expanded for reintroduction to the wild in that country.[4] Several thousand are held in captivity around the world.[2] 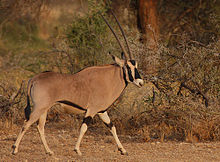 The East African Oryx (shown) resembles the closely related Gemsbok, but the latter has an entirely black tail, a black patch at the base of the tail, and more black to the legs and lower flanks.

Between 1969 and 1977, the New Mexico Department of Game and Fish intentionally released 93 gemsbok into its state's White Sands Missile Range, and that population is now estimated between 3,000 and 6,000 animals.[6] Within the state of New Mexico, oryxes are classified as "big game" and can be harvested with the proper license, however the quality of the hunt may be affected by military regulation of the missile range.

All oryx species prefer near-desert conditions and can survive without water for long periods. They live in herds of up to 600 animals. Newborn calves are able to run with the herd immediately after birth. Both males and females possess permanent horns. The horns are narrow, and straight except in the Scimitar Oryx, where they curve backwards like a scimitar. The horns are lethal — the oryx has been known to kill lions with them— and oryxes are thus sometimes called the sabre antelope (not to be confused with the Sable Antelope). The horns also make the animals a prized game trophy, which has led to the near-extinction of the two northern species.