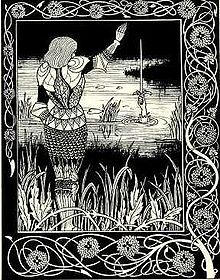 An Aubrey Beardsley illustration for Malory's Le Morte d'Arthur, "How Sir Bedivere Cast the Sword Excalibur into the Water" (1894)

Sir Thomas Malory (c. 1405 – 14 March 1471) was an English writer, the author or compiler of Le Morte d'Arthur. The antiquary John Leland (1506–1552) as well as John Bale believed him to be Welsh, but most modern scholars, beginning with G. L. Kittredge in 1894,[1] assume that he was Sir Thomas Malory of Newbold Revel in Warwickshire, who was a knight, land-owner and Member of Parliament.[2] The surname appears in various spellings, including, Mallerre, Maillorie, Mallory, Mallery, Maelor, Maleore, and as it seems he may have spelled it,[3] Malleorré. The name comes from the Old French adjective maleüré (from Latin male auguratus) meaning ill-omened or unfortunate.

Virtually all that is known about Malory the writer (there were at least six Thomas Malorys alive in the 15th century when Le Morte d'Arthur was written[4]), for certain, is what can be gathered from the prayers in the Winchester Manuscript. At the end of the "Tale of King Arthur," being Books I-IV in the printing by William Caxton, is written:

"For this was written by a knight prisoner Thomas Malleorre, that God send him good recovery."[5]

At the end of "The Tale of Sir Gareth," Caxton's Book VII:

"And I pray you all that readeth this tale to pray for him that this wrote, that God send him good deliverance soon and hastily."[5]

At the conclusion of the "Tale of Sir Tristram," Caxton's VIII-XII:

"Here endeth the second book of Sir Tristram de Lyones, which was drawn out of the French by Sir Thomas Malleorre, knight, as Jesu be his help."[5]

Finally, at the conclusion of the whole book:

However, all these are replaced by Caxton with a final colophon reading:

"I pray you all gentlemen and gentlewomen that readeth this book of Arthur and his knights, from the beginning to the ending, pray for me while I am alive, that God send me good deliverance and when I am dead, I pray you all pray for my soul. For this book was ended the ninth year of the reign of King Edward the Fourth by Sir Thomas Maleore, knight, as Jesu help him for his great might, as he is the servant of Jesu both day and night."[5]

It must be said that the author must have been from a rich enough family to ensure his education was sufficient to the point of being able to read French, and also to have been familiar with the Yorkshire dialect. A claimant's age must also fit the time of writing.[5]

This knight prisoner has led many to assume various identities for Malory, or Malleorre as it seems he spelled it. The earliest conclusion was made by John Bale, a 16th century antiquarian, who declared that Malory was Welsh, hailing from Maloria on the River Dee. This candidate received further support from Sir John Rhys, who, in 1893, proclaimed that the alternative spelling indicated an area straddling the England-North Wales border, Maleore in Flintshire, and Maleor in Denbigh. This would possibly relate Malory to Edward Rhys Maelor, a fifteenth-century Welsh poet.[5]

A second candidate was presented by A. T. Martin, another antiquarian, who proposed in an article written in 1897, that the author was Thomas Malory of Papworth St. Agnes in Huntingdonshire. The brief biography of Malory goes thus: Born on 6 December 1425 at Morton Court, Shropshire, he was the eldest son of Sir William Malory, representative of Parliament to Cambridgeshire. Thomas inherited his father's estates in 1425, and was placed in the wardship of the King for reasons unknown, remaining there until within four months of his death, in 1469. Nothing else is known of him, save one peculiar incident, discovered by William Matthews. In a collection of chancery proceedings, it is heard of a petition brought against Malory by Richard Kyd, parson of Papworth, claiming that Malory ambushed him on a November evening, and took him from Papworth, to Huntingdon, and then to Bedford, to Northampton, all the while being threatened on his life to either forfeit his church unto Malory, or else give £100. The outcome of this is unknown, but it seems to indicate something more than an average country gentleman, and his wardship explains the "knight prisoner."[5]

The third contender, is not only most well documented, but most popular as a claimant. This is Sir Thomas Malory of Newbold Revel in Warwickshire. H. Oskar Sommer first put forth this theory in his 1890 edition of Le Morte d'Arthur and Harvard Professor George Lyman Kittredge provided the evidence in 1896. Kittredge showed Malory as a soldier and member of Parliament who fought at Calais with Richard Beauchamp, Earl of Warwick. However, a biography by Edward Hicks in 1928, revealed him as a thief, bandit, kidnapper, and rapist, hardly in keeping with the high chivalric standards in the book.[5]

This Malory was born to Sir John Malory of Winwick and Lady Phillipa Malory, heiress of Newbold. Thomas, their only son, was born between 1393 and 1416. he became a professional soldier and served under the Earl of Warwick, but all dates are vague, and it is unknown how he became distinguished. He acted as an elector in Northamptonshire, but in 1443 was accused, along with an accomplice, Eustace Barnaby, of attacking, kidnapping, and stealing £40 of goods from Thomas Smythe. Nothing became of this charge, and he soon married a woman named Elizabeth Walsh,[6] who would bear him a son, Robert.[5]

The same year, Malory was elected to Parliament, serving at Westminster for the rest of 1443, and being appointed to a Royal Commission charged with the distribution of monies to impoverished towns in Warwickshire. Despite the charge against him, he seemed to have remained in good standing amongst his peers.[5]

However, this would change rapidly, when, in 1450 he was accused of ambushing the Duke of Buckingham, Humphrey Stafford, along with a gang of 26 other men. The accusation was never proved. In May of that year, he was next accused of exhorting 100 shillings from Margaret King and William Hales of Monks Kirby, and, the next August, of committing the same injury against John Mylner, for 20 shilings.[5]

In between, in June 1450, he found the time to break into the house of Hugh Smyth of Monks Kirby, stealing £40 pounds of goods, and raping his wife. Eight weeks later, Malory alone was charged with attacking the same woman, in Coventry. Nine months later, on 15 March 1451, he and 19 others were ordered to be arrested. Nothing came of this and in the following months, the Malory gang racked up crimes consisting of violent robberies, rising past 100. At one point, he was arrested and imprisoned in Maxstoke Castle, but he escaped, swam the moat, and regrouped with his gang at Newbold Revel.[5]

This continued, until the matter finally came to trial on 23 August 1451, in Nuneaton. Those accused included him and several others, with numerous charges. The judgement went against Malory and he was in London's Marshalsea prison by 1452, where he remained for a year. His response was to plead "not guilty," and demand a retrial with a jury of men from his own county. This never took place, but he was released. In March, he was back in Marshalsea, from which he escaped two months after, possibly by bribing the guards and gaolers. After a month, he was back in prison, and was held until the following May, released on a bail of £200, a considerable sum.[5]

Next, when Malory was to answer for his crimes, he could not be found. This was because he was in custody in Colchester, accused of more crimes involving robbery and the stealing of horses. Once again, he escaped, and was at liberty until November, when he was apprehended and returned to Marshalsea, under penalty for escape of £1000.[5]

He seems to have lain low for a few years, being either imprisoned in Newgate Prison or Marshalsea. He obtained bail at least once, but was soon locked up again for failing to pay back loans made to him by various people for his extensive bail payments. All these terms in prison would have given him ample time to write Le Morte d'Arthur.[5]

In and out of prison for years, he was pardoned at the accession of Edward IV to the throne in 1461. After this, little is heard, spare that a grandson, Nicholas, was born to Robert, who soon died[clarification needed]. Sir Thomas Malory of Newbold Revel died on 14 March 1470, and was buried with adequate splendor in Christ Church Greyfriars, near Newgate Prison. His being interred here suggests that his misdeeds were forgiven and that he possessed some wealth, either the result of his robberies, or some unknown patron, possibly Richard Neville, Earl of Warwick, under whom Malory may have spent time as a paid spy.[5]

"Here lies Sir Thomas Mallere, Valiant Knight. Died 14 March 1470, in the parish of Monkenkirby in the county of Warwick."[5]

His grave was lost when Greyfriars was dissolved by Henry VIII. His grandson, Nicholas lived to inherit his lands and was respected enough to be appointed High Sheriff in 1502.[5]

The fourth and final contender for the title of authorship is the little-known Thomas Malory from Hutton Conyers, in Yorkshire. His claim was put forth by the aforementioned Professor William Matthews of California University. This claim was met with little enthusiasm, despite considerable linguistic evidence, which demonstrates that the author spoke a regional dialect which matches with the writing of Le Morte d'Arthur. This Malory's not being a knight is considered a large flaw.[5]

A young Malory appears as a character at the end of T.H. White's book The Once and Future King, which was based on Le Morte d'Arthur. This cameo is included in the Broadway musical Camelot, and in the later film, where his name is given as "Sir Tom of Warwick", thus supporting the claim of Thomas Malory of Newbold Revel. Many modern takes on the Arthurian legend have their roots in Malory, including John Boorman's 1981 movie Excalibur, which includes selected elements of the book. Parts of Malory's book form a key element in Cynthia Harnett's children's novel "The Load of Unicorn".