Malonyl-CoA decarboxylase deficiency (MCD), or Malonic aciduria is an autosomal recessive[1] metabolic disorder caused by a genetic mutation which disrupts the activity of Malonyl-Coa decarboxylase. This enzyme breaks down Malonyl-CoA (a fatty acid precursor and a fatty acid oxidation blocker) into Acetyl-CoA and carbon dioxide.

The signs and symptoms of this disorder typically appear in early childhood. Almost all affected children have delayed development. Additional signs and symptoms can include weak muscle tone (hypotonia), seizures, diarrhea, vomiting, and low blood sugar (hypoglycemia). A heart condition called cardiomyopathy, which weakens and enlarges the heart muscle, is another common feature of malonyl-CoA decarboxylase deficiency. 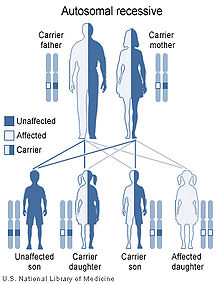 Malonyl-CoA decarboxylase deficiency has an autosomal recessive pattern of inheritance.

Many tissues, including heart muscle, use fatty acids as a major source of energy. Mutations in the MLYCD gene reduce or eliminate the function of malonyl-CoA decarboxylase. A lack of this enzyme disrupts the normal balance of fatty acid formation and breakdown. As a result, fatty acids cannot be converted to energy, which can lead to characteristic features of this disorder such as low blood sugar and cardiomyopathy. By-products of fatty acid processing build up in tissues, which also contributes to the signs and symptoms of malonyl-CoA decarboxylase deficiency.

Without the enzymatic activity of Malonyl-CoA decarboxylase, cellular Mal-CoA increases so dramatically that at the end it is instead broken down by an unspecific short-chain acyl-CoA hydrolase which produces malonic acid and CoA. Malonic acid is a krebs cycle inhibitor preventing the cells to make ATP through oxidation. In this condition, the cells, to make ATP, are forced to increase glycolysis which produces lactic acid as a by-product. The increase of lactic and malonic acid drastically lowers blood pH, and causes both lactic and malonic aciduria (acidic urine). This condition is very rare, as fewer than 20 cases have been reported.