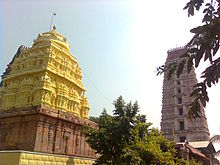 Mangalagiri means 'The holy hill'. Near the foot of the stone flight of steps is a stone pillar with a Telugu inscription, recording grants of villages. It is dated AD 1520 and mentions the capture of Kondavidu by Timmarasu, general of Krishna Deva Raya, in 1515 from the Gajapati rulers of Kalinga(ancient Orissa). Another stone near the temple of Garudalvar has inscriptions on four sides recording grants in the reign of Sadasiva Raya of Vijayanagara Empire AD 1538. The lofty gopuram in the temple at the foot of the hill was erected by Raja Vasireddy Venkatadri Nayudu in 1807-1809,and in terms of sculpture and architecture this temple stands to be an ultimate testimant for the ancient vishwakarma sthapathis in planning and sculpting these temples.

Mangalagiri was under the control of Golkonda Nawabs for a long period. It was plundered by in 1780 by Hyder Ali but could not be conquered. In 1816, a gang of Pindaris again looted the place. It slowly recovered from these two attacks during the time of Raja Vasireddy Venkatadri Nayudu who ruled the place from Amaravati. There is a big koneru (tank) in the center of the place which went to dry in 1882. As many as 9,840 guns and 44 bullets which might have been related to pindaris have been found here after the pindaris looted this place. 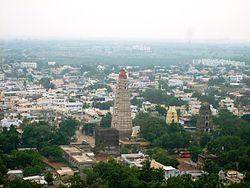 The picturesque hill was visited by the great Sri Krishna Deva Raya.[citation needed]

There is an interesting legend to show how the mountain came into existence. The mountain itself is in the form of an elephant. Pariyatra, an ancient king, had a son - Hrasva Srungi. He visited all holy and sacred places to regain normal bodily stature and finally visited this holy place of Mangalagiri and stayed for three years performing penance. All the Devathas (Gods) advised him to stay at Mangalagiri and continue to do penance in praise of Lord Vishnu. The father of Hrasva Srungi came with his retinue to bring his son back to his kingdom. But Hrasva Srungi took the shape of an elephant to become the abode of Lord Vishnu who is locally known as Panakala Lakshmi Narasimhaswamy.

The temple of Sri Panakala Lakshmi Narasimhaswamy is situated on the hill. On the right side of the steps (provided to reach the temple), there is a stone inscription by Sri Krishna deva Raya of Vijayanagar, and a little further up, the foot prints of Chaitanya Mahaprabhu can be seen. Midway up the steps, there is a temple of Lord Panakala Lakshmi Narasimhaswamy; there is only the face with the mouth opened wide. A dhwajasthambham was erected in front of the temple in 1955. Behind the temple, there is the temple of Sri Lakshmi; to the west, there is a tunnel which is believed to lead to the Undavalli caves on the banks of the Krishna River.

The stone inscription of the kings of Vijayanagar relate besides to the conquest of Raya over Kondaplli etc., that Siddiraju Thimmarajayya Devara granted a total of 200 kunchams (10 kunchams make one acre) of land in 28 villages of which Mangalagiri was one and gift of 40 kunchams by China Thirumalayya to Ramanujakutam. 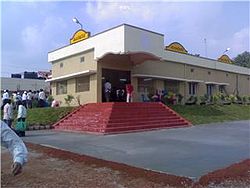 Mangalagiri is located on National Highway No.5 that connects Kolkata and Chennai. One can reach Mangalagiri trough on road by a bus either from Vijayawada or Guntur or Tenali. It has also a railway station by the same name in Guntur-Vijayawada section of Guntur division under the South Central Railway. Other modes of transport like a taxi services and auto rickshaws can also be used.

Schools in and around