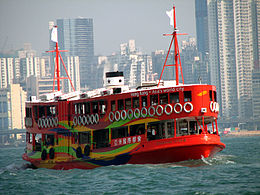 A Star Ferry carries passengers across Victoria Harbour. This particular one is painted with an advertisement that promotes Hong Kong as Asia's World City.

The Star Ferry, or The "Star" Ferry Company, is a passenger ferry service operator in Hong Kong. Its principal routes carry passengers across Victoria Harbour, between Hong Kong Island and Kowloon. It was founded in 1888 as the Kowloon Ferry Company, adopting its present name in 1898.

The fleet of twelve ferries currently operates two routes (four prior to April 1, 2011)[1] across the harbour, carrying over 70,000 passengers a day, or 26 million a year. Even though the harbour is crossed by railway and road tunnels, the Star Ferry continues to provide an inexpensive mode of harbour crossing. The company's main route runs between Central and Tsim Sha Tsui.

It has been rated first in the “Top 10 Most Exciting Ferry Rides” poll by the Society of American Travel Writers (“SATW”) in February 2009.[2][3]

Before the steam ferry was created, people would cross the harbour in sampans. In 1870, a man named Grant Smith brought a twin-screw wooden-hulled boat from England and started running it across the harbour at irregular intervals.[4]

In July 1873, an attempt was made to run steam ferries between Hong Kong and Kowloon. This was stopped at the time at the request of the British consul in Canton.[4]

The company was founded by Parsee merchant Dorabjee Naorojee Mithaiwala as the "Kowloon Ferry Company" in 1888. Naorojee bought Smith's boat,[4] and later acquired the steam vessels Morning Star and Evening Star from a Mr Buxoo.[5] It is thought that a regular service to the public was established in the mid-to-late 1870s, after the cession of Kowloon to the British in 1860.[5] The popularity of this means of transport enabled him to increase his fleet to four vessels within 10 years: the Morning Star, Evening Star, Rising Star and Guiding Star. Each boat had a capacity of 100 passengers, and the boats averaged 147 crossings each day.[4] He incorporated the business into the "Star Ferry Co Ltd" in 1898, prior to his retirement to India.[5] The company name was inspired by his love of Alfred Lord Tennyson's poem "Crossing the Bar", of which the first line reads "Sunset and evening star, and one clear call for me!".

On his retirement in 1898, Naorojee sold the company to The Hongkong and Kowloon Wharf and Godown Company Limited, at that time owned by Jardine, Matheson & Co. and Sir Paul Chater.[4]

A pier constructed on the western end of Salisbury Road opened in 1906, but was destroyed by a typhoon in September 1906. In the early 1950s, construction of the present twin-piered terminal commenced on both sides of Victoria Harbour, designed to handle 55 million passenger trips a year.[6] The structure was completed in 1957, concurrent with the Edinburgh Place Ferry Pier built on the island side.

At the turn of the century, Hong Kong currency and Canton currency were both accepted as legal tender in Hong Kong. In the autumn of 1912, following a devaluation, the Star Ferry caused a controversy by insisting, together with the tramways, that payment had to be made in Hong Kong currency only. Canton coinage would no longer be accepted.[7]

In 1924 the Yaumati Ferry operated the route to Kowloon in a duopoly.[8] In 1933 the Star Ferry made history by building the Electric Star, the first diesel electric passenger ferry of its kind.[4]

By 1941, the company had six vessels. During the Japanese Occupation of Hong Kong, the competing Yaumati Ferry was allowed to continue, while the Japanese commandeered the Star Ferry for their own purposes. The Golden Star and the Meridian Star were used to transport prisoners of war from Sham Shui Po to Kai Tak.[4] In 1943, the Golden Star was bombed and sunk in the Canton River by the Americans, and the Electric Star was sunk in the harbour. After the war, the ferries were recovered and returned to service.[4]

Until the opening of the Cross Harbour Tunnel in 1972, the Star Ferry remained the main means of public transportation between Hong Kong Island and the Kowloon side.

The Star Ferry operates on a franchise from the Government. It was last renewed in March 1998, the year of its centenary.[7]

In 1966, a fare increase of 5 cents (or 25%) of the ferry was a political milestone, as it caused a 27 year-old student to go on hunger strike in protest at the Edinburgh Place terminal. His arrest sparked the 1966 Hong Kong Riots.[5]

On 11 November 2006, the end of an era was marked when the third generation pier in Central, the Edinburgh Place Ferry Pier, ended its mission, along with the big clock tower. The pier was demolished to make way for reclamation, amidst great controversy and important protests. 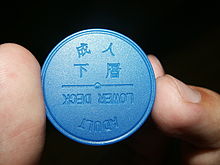 The Star Ferry operates the following cross-harbour routes (The prices are effective from 1 January 2010):

Passengers may use Octopus, or tokens to pay for the ride. Tokens are available in the vending machines at the piers. Coins are also accepted but no change will be provided.

Bicycles (up to 6) are accepted on the lower deck of most routes, for $13.0, but not between 5-6pm. The Tsim Sha Tsui – Central route does not accept cycles, but the Tsim Sha Tsui – Wan Chai route accepts cycles at no extra charge.

The Star Ferry "Golden Star' is available for daily charter, for up to 300 people, having been refurbished for cruises and functions, with tables, larger sightseeing windows, an air-conditioned area, and a public address and music system.

There are currently 9 diesel-electric ferries in the fleet[9], together with a tug.[10]

Over the years, the fleet has included: 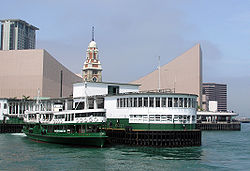 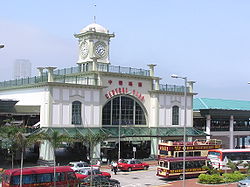 The façade of the fourth-generation Star Ferry Pier in Central, Hong Kong

Since the Central Star Ferry Pier has been moved from its old pier next to City Hall to the new location outside International Finance Centre, the number of people using the Star Ferry to cross the harbour has fallen drastically, nowadays only tourists and only a few commuters use the system. This has meant the Star Ferry company has lost many millions of dollars since the relocation. Therefore it decided not to re-tender for the loss-making Hung Hom-Central and Hung Hom-Wan Chai routes and will stop operating these routes and the relevant piers at Hung Hom Ferry Pier on 31 March 2011.[11]

The Star Ferry makes a "star turn" in the 1960 film The World of Suzie Wong. In the beginning of the film, Robert Lomax (played by William Holden) disembarks from the SS President Wilson (an old American President Lines transpacific passenger vessel) and takes the Star Ferry to Hong Kong island, and on the ferry meets Suzie Wong (played by Nancy Kwan), who scorns his attentions. The ferry (Radiant Star) itself is completely recognisable, and the layout of the pier where William Holden debarks in Kowloon is familiar to any denizen of Tsim Sha Tsui, minus the giant shopping malls constructed since the film was shot.

Several brief scenes in the TV miniseries Noble House are set aboard the ferry .