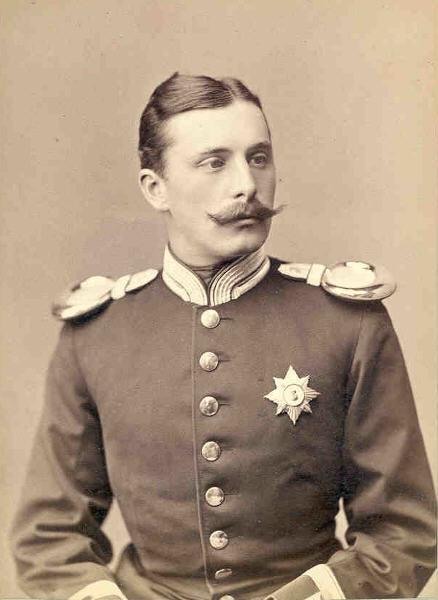 
Colonel Prince Henry of Battenberg (Henry Maurice; _de. Heinrich Moritz; – ) was a descendant of the Grand Ducal House of Hesse, later becoming a member of the , through his marriage to Princess Beatrice.

Henry was born on in , . His father was , the third son and fourth child of Grand Duke Ludwig II of Hesse and . His mother was Julie Therese née Countess of Hauke.

His parent's marriage was a , as Julia was not considered a proper wife for a Prince, being only a . As such, at the time of his birth, Henry could not take his title from his father, and was styled "His Illustrious Highness Count Henry (Heinrich) Maurice of Battenberg"

On , Henry's mother was created "Princess of Battenberg" with the style "". Henry inherited this style and became "His Serene Highness Prince Henry of Battenberg"

Prince Henry received a military education and took up a commission as a lieutenant in the 1st Regiment of the Rhenish Hussars in the .

Because of their close relationship to the Grand Ducal House of Hesse, the Battenbergs came into close contact with various Royal and Princely families of Europe, including the British Royal House. Henry's elder brother, , had married Princess Victoria of Hesse and by Rhine, his and a granddaughter of Queen Victoria. In 1884, Prince Henry became engaged to The Princess Beatrice, the fifth daughter and the youngest child of Queen Victoria and . Queen Victoria agreed to the marriage on the condition that the couple should make their home with her.

Prince Henry and Princess Beatrice married on at St. Mildred's Church, Whippingham on the . On the day of his wedding, the Queen granted Prince Henry the style "Royal Highness." to give him equal rank with his wife. This style took effect in the , but not Hesse and by Rhine (where the Prince was a still considered a "Serene Highness"). On the same day, a bill to naturalize Prince Henry a British subject passed the . The couple adopted the style, "Their Royal Highnesses Prince and Princess Henry of Battenberg". The Queen created her new son-in-law a Knight of the Garter and made him a member of the Privy Council. He also became a Colonel in the , and afterwards Captain-General and Governor of and the .

Prince and Princess Henry of Battenberg had four children. By Royal Warrant of , the Queen granted their children the style "Highness". This style took immediate effect in the though not in Hesse and by Rhine, where, as Princes and Princesses of Battenberg, they were only entitled to the style "Serene Highness".

In November 1895, Prince Henry persuaded Queen Victoria to allow him to go to West Africa to fight in the Ashanti War. He served as the military secretary to the commander-in-chief of British forces, General Sir Francis Scott. He contracted malaria when the expedition reached Prahsu, about 30 miles from Kumasi, and subsequently died aboard the cruiser HMS "Blonde" stationed off the coast of Sierra Leone. His body was repatriated by the cruiser HMS "Blenheim" from the and his funeral service took place on , at the same St. Mildred's Church on the Isle of Wight where he had been married. Interment followed in what became known as the Battenberg Chapel. The remains of his wife, Princess Beatrice, were placed there in August 1945 and those of his eldest son, the Marquess of Carisbrooke, in July 1961.