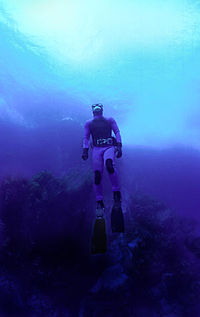 A deep water blackout is a loss of consciousness caused by cerebral hypoxia on ascending from a deep freedive or breath-hold dive, typically of ten metres or more when the swimmer does not necessarily experience an urgent need to breathe and has no other obvious medical condition that might have caused it.[1][2][3] Victims typically black out close to the surface, usually within the top three metres, sometimes even as they break surface and have often been seen to approach the surface without apparent distress only to sink away. It is quite rare for blackouts to occur while at the bottom or in the early stages of ascent; divers who drown in these stages are usually found to have inhaled water, indicating that they were conscious and succumbed to an uncontrollable urge to breathe rather than blacking out. Victims are usually established practitioners of deep breath-hold diving, are fit, strong swimmers and have not experienced problems before. Survivors of deep water blackout are typically puzzled as to why they blacked out. Breath-hold diving is often referred to elsewhere as dynamic apnoea diving or free-diving. Blackout may also be referred to as a syncope (medicine) or fainting.

In some places, notably in US scuba diving open water curricula, a blackout from a deep freedive is sometimes referred to as a shallow water blackout. Where this happens there is usually little or no discussion of the phenomenon of blackouts not involving depressurisation and the cause may be variously attributed to either depressurisation or hypocapnia or both. This problem probably stems from the original identification of the mechanism of latent hypoxia arising in the context of a string of fatal, shallow water accidents with early military, closed-circuit rebreather apparatus prior to the development of effective partial pressure oxygen meters. In the very different context of dynamic apnoea sports careful consideration of terms is needed to avoid potentially dangerous confusion between two phenomena having different characteristics, mechanisms and prevention. The application of the term shallow water blackout to deep dives and its subsequent association with extreme sports has tended to mislead many practitioners of static apneoa and dynamic apnoea distance diving into thinking that it does not apply to them even though true shallow water blackout kills many swimmers every year, often in shallow swimming pools.[4]

Some consider deep water blackout to be a special condition or subset of shallow water blackout, which is more accurate and may be acceptable. However, in the interests of accuracy, clarity, helpfulness and safety this article treats the two as separate phenomena with the following characteristics:

This confusion is exacerbated by the fact that in the case of deep water blackout hypocapnia may be involved even if ascent is the actual precipitator.

The onset of symptoms may start around 30 metres and unconsciousness may occur at around 90 metres. Because free-divers start and finish the dive with only a single lungful of nitrogen to absorb, nitrogen narcosis has long been assumed to be an issue only for divers on compressed air. However, this issue may be more complex than that and needs to be resolved.[2] There is a lot more to nitrogen narcosis than blackout and it is imprecise and probably not helpful to use the term deep water blackout to refer to a single aspect of it. Therefore, for the purposes of this article deep water blackout refers to latent hypoxia at depth and is unrelated to nitrogen narcosis.

1. Voluntary suppression of breathing. Deep water blackout is sometimes attributed to the practiced diver’s ability through training to suppress the urge to breathe. If surviving divers are aware that they have heavily suppressed the urge to breathe towards the end of the dive there is a tendency to look no further for an explanation. However, there are two problems with this as an explanation:

For these two reasons voluntary suppression of breathing might be considered a contributory factor in that it helps push other factors past the threshold limit but it is not the primary factor.

2. Rapid depressurisation. Because deep water blackout occurs as the diver approaches the surface without necessarily showing signs of distress, depressurisation is clearly implicated in the cause. Consciousness depends on a minimum partial pressure of oxygen in the brain not on the absolute quantity of the gas in the system. (See pulmonary alveolus for details of gas pressure in the lung.) At the surface, the air in the lungs is under 1 atmosphere of pressure; at 10 metres, the water pressure doubles the pressure of air in the lungs to 2 atmospheres. Recreational deep breath-hold dives can often go to 20 metres, competitive deep dives can go much deeper, and the current free-dive record exceeds 200 metres. Ten metres is easily achievable by a reasonably fit and competent swimmer. Most people go unconscious when the partial pressure of oxygen (ppO2) in their lungs, normally 105 mmHg falls below ~30 mmHg. Ten metres of water effectively doubles this to 60 mmHg putting the diver above the blackout threshold until they hit the 30 mmHg limit on ascent. A ppO2 of 45mmHg at ten metres will pretty much ensure a blackout between four metres and the surface. S.Miles termed this latent hypoxia. Although quite comfortable on the bottom the diver may actually be trapped and unaware that it is now no longer possible to ascend safely through the shallow layers above and a diver pushing the limits may expect to go unconscious without warning just as he or she approaches the surface. Rapid depressurisation certainly answers the question as to why victims black out so close to the surface and without distress but it is still unclear why it happens at all. A physiological explanation dependent on pressurisation of the body is required. Two theories have been put forward as to how this might work:

If neither of these theories can fully account for blackout it is necessary to seek another cause.

3. Self induced hypocapnia. Hyperventilation leading to hypocapnia and subsequent loss of an appropriate urge to breathe is the mechanism behind shallow water blackout; refer to the shallow water blackout article for a detailed description of how this commonly misunderstood mechanism works. Many practitioners of deep water breath-hold diving use hyperventilation as a misguided method of extending the duration of their bottom time and so this mechanism is almost certainly relevant to deep water blackouts also. If the diver has hyperventilated, the mechanism is essentially that for shallow water blackout but hypoxia is delayed by pressure at depth and sets in only when the pressure drops to 1.25 to 1 atmospheres. This explains why divers who die like this do so very close to the surface on their way up and why they may not have felt any urgency to breathe at all; fit, free-divers ascending from deep dives can go unconscious without any warning.

In conclusion, depressurisation on ascent is an explanation for the consistent depth location of deep water blackouts but is currently an insufficient explanation of cause unless accompanied by an underlying suppression of the urge to breathe through self induced hypocapnia via hyperventilation. Experienced free-divers are put at special risk by their practiced ability to suppress the carbon dioxide induced urge to breathe. Unfit and inexperienced swimmers rarely have the ability to descend deep enough to induce deep water blackouts and are unable to suppress the urge to break surface at the very onset of distress, if they drown it is much more likely to be from other causes. The strong and the fit are at most risk. Practitioners of deep breath-hold diving should be counselled on the role of depressurisation regarding the timing of deep water blackouts but should be given the same advice for dive preparation as suggested for shallow water blackout, which centres on relaxation and avoids hyperventilation. Where deep breath-hold divers are observed to use hyperventilation timely and informed advice may save their lives but experience suggests that divers are reluctant to change their practice unless they have a very clear understanding of the mechanics of the process.