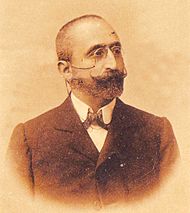 Born in Iaşi, after attending secondary school in his native city and in Dresden, Cuza studied law at the University of Paris, the Universität unter den Linden, and the Université Libre de Bruxelles. He took doctorates in political science and economy (1881), as well as law (1882).

Upon his return to Romania, Cuza became active in the socialist circle formed around Constantin Mille. He then attended meetings of the Junimea literary society, contributing to its magazine Convorbiri Literare. In 1890, he engaged in the political aspect of Junimea, serving briefly as deputy mayor of Iaşi; in 1892, he was elected to the Chamber of Deputies (serving until 1895). Cuza moved on to the Conservatives, and was yet again deputy – until a split generated by his virulent Antisemitism. He briefly managed to achieve international prominence, after organizing the Alliance Anti-semitique Universelle ("Universal Antisemitic Alliance") in Bucharest (1895).

He decided to start his own movement, one centered on the rejection of Jews from public life. His first attempt saw him joining forces with historian A. D. Xenopol, creating Liga contra alcoolismului ("The League Against Alcoholism") and its magazine, Biblioteca Ligii contra alcoolismului. The scope of this movement went well beyond fighting addiction: Cuza and Xenopol saw the root of this social evil with Jewish entrepreneurs of the rural sphere. The League claimed that Jews were encouraging Romanian peasants to drink, in order to ensure a captive market, and even to benefit from their very ruin (by having them sign off assets in order to feed their habit). The prejudice had acquired a tradition by the turn of the century – however, such attitudes ignored the fact that few other employments were left open for Jews, who were awarded full citizenship only after 1923.

In 1901, Cuza became a professor at the University of Iaşi. Since his previous initiative had died out, he associated with Nicolae Iorga: after a period of publishing articles in the latter's Neamul Românesc, he joined Iorga in the creation of the Democratic Nationalist Party (1910). In 1912, he became the editor of the Party official voice, the Unirea newspaper. Cuza showed himself in favor of replacing the restrictive framework of the Romanian state by adopting universal male suffrage, and proposed a land reform – in which he saw an end to leasehold estates, of which Jews would have taken an undeserved profit. The latter goal brought Cuza into an alliance with General Alexandru Averescu's People's League, a populist movement of immense, albeit brief popularity (he himself wrote down the League's founding document).

He broke off with Iorga and founded the more radical National Christian Union in 1922 (the new Party found inspiration in Fascism and the Blackshirts, but was not paramilitary itself). It used the swastika as its symbol – one already connected to Anti-Semitic movements in Germany, and made himself known by supporting a Jewish quota in higher education (a demand which created a standoff with the government during a nationalist students' strike in 1923).

Cuza's movement took shape in the same year, when it transformed into the National-Christian Defense League with the help of young Corneliu Zelea Codreanu (already a good friend of Cuza's). A. C. Cuza's refusal to turn the movement into a militia alienated Codreanu: in late 1927, after several attempts at imposing his line, Codreanu left in order to found the movement that would become known as the Iron Guard.

The conflict between the two turned vitriolic. All major conflicts of the 1930s between Codreanu and the establishment found Cuza on the latter's side, eager to win back his movement's place as the leading Antisemitic voice. In 1935, he joined forces with Octavian Goga's National Agrarian Party, forming the new National Christian Party. After the elections of 1937, the intervention of King Carol II (a Fascist sympathizer who was however wary of the Iron Guard) brought the National Christians to government, with Goga as Prime Minister and Cuza as minister of state. Alongside the overt persecution of Jews, the government adopted Corporatism. In a paradoxical turn, Cuza agreed to have the Party turn towards paramilitary activism: his government created its answer to the armed Iron Guard, the Lăncieri ("Lance-bearers").

The Goga-Cuza government was not able to lift Romania from crisis: as a minority rule that was meant to satisfy the King, it only managed to alienate the public. In February 1938, after several attempts at forming a national government, Carol dismissed it and replaced it with a personal dictatorship. In 1939, Cuza held his last political post as member of the Crown Council.