The Northern Cardinal or Redbird or Common Cardinal (Cardinalis cardinalis) is a North American bird in the genus Cardinalis. It can be found in southern Canada, through the eastern United States from Maine to Texas and south through Mexico. It is found in woodlands, gardens, shrublands, and swamps.

The Northern Cardinal is a mid-sized songbird with a body length of 21 centimeters. It has a distinctive crest on the head and a mask on the face which is black in the male and gray in the female. The male is a vibrant red, while the female is a dull red-brown shade. The Northern Cardinal is mainly granivorous, but also feeds on insects and fruit. The male behaves territorially, marking out his territory with song. During courtship, the male feeds seed to the female beak-to-beak. A clutch of three to four eggs is laid, and two to four clutches are produced each year. It was once prized as a pet, but its sale as cage birds is now banned in the United States by the Migratory Bird Treaty Act of 1918.

The Northern Cardinal is one of three birds in the genus Cardinalis and is included in the family Cardinalidae, which is made up of passerine birds found in North and South America.

The common name, as well as the scientific name, of the Northern Cardinal refers to the cardinals of the Roman Catholic Church, who wear distinctive red robes and caps.[5] The term "Northern" in the common name refers to its range, as it is the northernmost cardinal species.[5]

The Northern Cardinal is a mid-sized songbird with a body length of 20–23 cm (7.9–9.1 in) and a wingspan of 25–31 cm (9.8–12 in). It weighs about 45 g (1.6 oz). The male is slightly larger than the female.[6] The male is a brilliant crimson red with a black face mask over the eyes, extending to the upper chest. The color is dullest on the back and wings.[7] The female is fawn, with mostly grayish-brown tones and a slight reddish tint on the wings, the crest, and the tail feathers.[8] The face mask of the female is gray to black and is less defined than that of the male. Both sexes possess prominent raised crests and bright coral-colored beaks. The beak is cone-shaped and strong.[7] Young birds, both male and female, show the coloring similar to the adult female until the fall, when they molt and grow adult feathers.[9] They are brown above and red-brown below, with brick-colored crest, forehead, wings, and tail.[4] The legs and feet are a dark pink-brown. The iris of the eye is brown.[4] The plumage color of the males is produced from carotenoid pigments in the diet.[10] Coloration is produced from both red pigments and yellow carotenoid pigments.[11] Northern Cardinal males possess the ability to metabolize carotenoid pigments to create plumage pigmentation of a color different from the ingested pigment. When fed only yellow pigments, males become a pale red color, rather than a yellow.[11]

The Northern Cardinal is abundant across the eastern United States from Maine to Texas and in Canada in the provinces of Ontario, Quebec, and Nova Scotia. Its range extends west to the U.S.-Mexico border and south through Mexico to the Isthmus of Tehuantepec, northern Guatemala, and northern Belize. It was introduced to Bermuda in 1700. It has also been introduced in Hawaii and southern California. Its natural habitat is woodlands, gardens, shrublands, and swamps.[1] This bird is a permanent resident throughout its range, although it may relocate to avoid extreme weather or if food is scarce.[12]

The Northern Cardinal is a territorial song bird. The male sings in a loud, clear whistle from the top of a tree or another high location to defend his territory. He will chase off other males entering his territory. He may mistake his image on various reflective surfaces as an invading male, and will fight his reflection relentlessly. The Northern Cardinal learns its songs, and as a result the songs vary regionally. It is able to easily distinguish the sex of another singing Northern Cardinal by its song alone.[13] Mated pairs often travel together.[14]

Male often feeds the female as part of their courtship behavior

Both sexes sing clear, whistled song patterns, which are repeated several times, then varied. Some common phrases are described as "cheeeer-a-dote, cheeer-a-dote-dote-dote," "purdy, purdy, purdy...whoit, whoit, whoit, whoit," "what-cheer, what-cheer... wheet, wheet, wheet, wheet"[12] and cheer, cheer, cheer, what, what, what, what[15] The Northern Cardinal has a distinctive alarm call, a short metallic 'chip' sound. This call often is given when predators approach the nest, in order to give warning to the female and nestlings.[4] In some cases it will also utter a series of chipping notes. The frequency and volume of these notes increases as the threat becomes greater.[4] This chipping noise is also used by a Cardinal pair to locate each other, especially during dusk hours when visibility wanes.

The diet of the Northern Cardinal consists mainly (up to 90 percent) of weed, grains, and fruits. It is a ground feeder and finds food while hopping on the ground through trees or shrubbery. It eats beetles, cicadas, grasshoppers, snails, wild fruit and berries, corn (maize) and oats, sunflower seeds, the blossoms and bark of elm trees, and drinks maple sap from holes made by sapsuckers, an example of commensalism.[16] During the summer months, it shows preference for seeds that are easily husked, but is less selective during winter, when food is scarce. Northern Cardinals also will consume insects and feed their young almost exclusively on insects.[17] 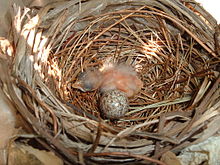 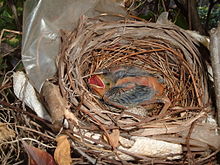 At one week old 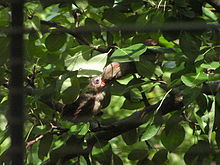 Pairs mate for life, and they stay together year-round. Mated pairs sometimes sing together before nesting. During courtship they may also participate in a bonding behavior where the male collects food and brings it to the female, feeding her beak-to-beak.[12] If the mating is successful, this mate-feeding may continue throughout the period of incubation.

Males sometimes bring nest material to the female, who does most of the building. She crushes twigs with her beak until they are pliable, then turns in the nest to bend the twigs around her body and push them into a cup shape with her feet. The cup has four layers: coarse twigs (and sometimes bits of trash) covered in a leafy mat, then lined with grapevine bark and finally grasses, stems, rootlets, and pine needles. The nest typically takes 3 to 9 days to build; the finished product is 2–3 inches tall, 4 inches across, with an inner diameter of about 3 inches. Cardinals do not usually use their nests more than once. The female builds a cup nest in a well-concealed spot in dense shrub or a low tree one to three meters (three to ten ft) off the ground. The nest is made of thin twigs, bark strips, and grasses, lined with grasses or other plant fibers.[18] Eggs are laid one to six days following the completion of the nest. The eggs are white, with a tint of green, blue or brown, and are marked with lavender, gray, or brown blotches which are thicker around the larger end.[10] The shell is smooth and slightly glossy.[18] Three or four eggs are laid in each clutch. Eggs measure approximately 1 x .75 inches in size.[10] The female generally incubates the eggs, though, rarely, the male will incubate for brief periods of time. Incubation takes 12 to 13 days.[18] Young fledge 10 to 11 days after hatching. Two to three, and even four, broods are raised each year.[18] The male cares for and feeds each brood as the female incubates the next clutch of eggs.[16]

The oldest wild Cardinal banded by researchers lived at least 15 years and 9 months, although 28.5 years was achieved by a captive bird. Annual survival rates for adult Northern Cardinals have been estimated at 60 to 65%;[19] however, as with other passerine birds, the high mortality of juveniles means that the average lifespan is only about a year. 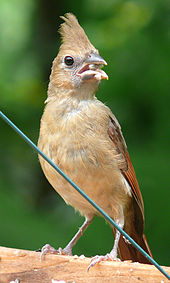 Fledgling at a box feeder

The Northern Cardinal is found in residential areas throughout its range. Backyard birders attract it using feeders containing seeds, particularly sunflower seeds and safflower seeds. Although some controversy surrounds bird feeding (see bird feeder for details), an increase in backyard feeding by humans has generally been beneficial to this species. It is listed as a species of Least Concern by the IUCN Red List. It has an estimated global range of 5,800,000 square kilometers (2,239,392.5 sq mi) and a global population estimated to be about 100,000,000 individuals.[1] Populations appear to remain stable and it has not reached the threshold of inclusion as a threatened species, which requires a decline of more than 30 percent in ten years or three generations.[1] It was once prized as a pet due to its bright color and distinctive song.[8] In the United States, this species receives special legal protection under the Migratory Bird Treaty Act of 1918, which also banned their sale as cage birds.[20] It is also protected by the Convention for the Protection of Migratory Birds in Canada.[21] It is illegal to take, kill, or possess Northern Cardinals, and violation of the law is punishable by a fine of up to 15,000 US dollars and imprisonment of up to six months.[22]