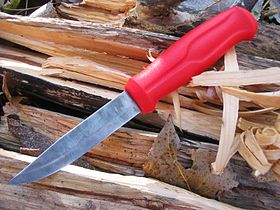 Mora knife (in Swedish: Morakniv) is a term used to refer to a range of popular belt-knives manufactured by the cutleries of the town of Mora in Dalarna, Sweden, primarily by Mora of Sweden. Having been used as every-day knives in Scandinavia for years, the knife has found particular favour in the bushcraft community on the basis of its simple and robust construction, easy maintainability and general versatility of use, and, of course, its comparatively low price-tag. Mora knives come highly recommended by notable bushcraft teachers Ray Mears, Cody Lundin and Mors Kochanski. Furthermore, in Sweden and Finland, mora knives are extensively used in construction and in the industry as general-purpose tools. Most mora knives are similar in design to Finnish puukkos.

The forging of Mora knife dates back to Medieval swordsmithing tradition. The blade of mora is forged of three slabs of steel. The heart section of the blade has traditionally been crucible steel of extremely high toughness and quality. The sides of the blade are of softer but more resilient steel. The result is an excellent tool which does not break easily, holds its edge well, and can cut even wrought iron and softer steel. Modern basic mora knives are blanked out of rolled steel and heat treated on an industrial line.

There are two main styles of mora knife in common use today; the newer synthetic-handled varieties and the so-called "classic" style, made in a large variety of sizes, using either 12C27 stainless, UHB-20Ccarbon steel or laminated (Mild steel and UHB-20C) carbon steel by Mora of Sweden.

A Mora of Sweden knife Clipper, with a stainless steel blade and a synthetic handle.

Mora knives have been mostly produced by "KJ Eriksson" and "Frosts Knivfabrik" companies. Those have merged their brands in 2008 under the "Mora of Sweden" brand.

The proper way to pronounce "mora" is with a long o, "moo-ra".