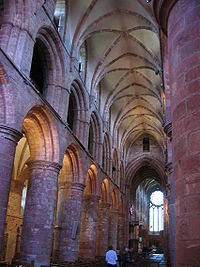 The Romanesque interior of St. Magnus' Cathedral, the seat of the bishops of Orkney.

The Bishop of Orkney was the ecclesiastical head of the Diocese of Orkney, one of thirteen medieval bishoprics within the territory of modern Scotland. It included both Orkney and Shetland. It was based for almost all of its history at St. Magnus' Cathedral, Kirkwall.

The bishopric appears to have been suffragan of the Archbishop of York (with intermittent control exercised by the Archbishop of Hamburg-Bremen) until the creation of the Archbishopric of Trondheim (Niðaros) in 1152. Although Orkney itself did not become politically part of Scotland until 1468, the Scottish kings and political community had been pushing for control of the islands for centuries. The see, however, remained under the nominal control of Trondheim until the creation of the Archbishopric of St. Andrews in 1472, when it became for the first time an officially Scottish bishopric. The Bishopric's links with Rome ceased to exist after the Scottish Reformation. The bishopric continued, saving temporary abolition between 1638 and 1661, under the episcopal Church of Scotland until the Revolution of 1688. Episcopacy in the established church in Scotland was permanently abolished in 1689, but in 1878 the Catholic Church re-established the bishopric system, and Orkney came under the resurrected and reformatted Diocese of Aberdeen. A Scottish Episcopal Church bishopric encompassing Orkney was created in 1865, as the Bishopric of Aberdeen and Orkney.