Mount Galunggung (Indonesian: Gunung Galunggung, formerly spelled Galoen-gong) is an active stratovolcano in West Java, Indonesia, around 80 km southeast of the West Java provincial capital, Bandung (or around 25 km to the east of the West Java town of Garut). Mount Galunggung is part of the Sunda Arc extending through Sumatra, Java and Bali, which has resulted from the subduction of the Indian oceanic plate and the Australian plate beneath the Eurasian plate. 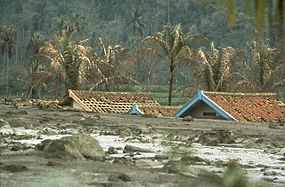 A lahar from the 1982 eruption of Galunggung.

The last major eruption on Galunggung was in 1982, which had a Volcanic Explosivity Index of 4 and killed 72 people. This eruption also brought the dangers of volcanic ash to aviation to worldwide attention, after two Boeing 747 passenger jets flying downwind of the eruption suffered temporary engine failures and damage to exterior surfaces, both planes being forced to make emergency landings at Jakarta airport.

One, a British Airways aircraft carrying 240 passengers, accidentally entered the ash cloud during night time in June 1982 150 km downwind of the volcano. All four engines failed due to the buildup of volcanic ash, and the aircraft descended for 16 minutes, losing 7,500 metres of its 11,500-meter altitude, until the crew managed to restart the engines.

The following month a Singapore Airlines aeroplane with 230approx passengers aboard also inadvertently entered the cloud at night time, and three of its four engines stopped. The crew succeeded in restarting one of the engines after descending 2,400 metres. Both aircraft suffered serious damage to their engines and exterior surfaces

A hummocky deposit known as the Ten Thousand Hills of Tasikmalaya attracted the attention of early 20th century geologists. Houses were built on the hummocks since they provided good defence against hostile people, and being above the paddy fields were free of mosquitoes and rats.

Originally, it was thought that either it had been formed by a lahar caused by the release of the waters of the crater lake, or that it was man-made; composed of rocks and boulders dumped there after being cleared from paddy fields.

However, in the light of the Mount St. Helens eruption of 1980 and from examination of the Mount Shasta deposits it has become clear that the hummocks are a debris-avalanche deposit. Like these mountains, Galunggung has a horseshoe-shaped crater indicating a massive landslide, and examination of shattered lava blocks revealed them to be similar to deposits on the other two volcanoes. According to radiocarbon dating of samples taken from a lava flow the landslide happened within the last 23,000 years.