Deep Eddy Pool is a historic, man-made swimming pool in Austin, Texas. Deep Eddy is the oldest swimming pool in Texas and features a bathhouse built during the Depression era by the Works Progress Administration. The pool began as a swimming hole in the Colorado River, became a resort in the 1920s, and is today a popular swimming pool operated by the City of Austin. 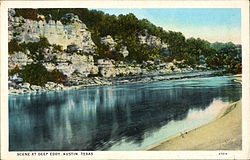 Deep Eddy began simply as a swimming hole in the Colorado River that flows through Austin. Cold springs rose from the river banks and people swam in the river where a large boulder formed an eddy. In 1915, A.J. Eilers, Sr. bought the land surrounding the swimming hole and built the concrete pool. The pool served as the centerpiece of a resort, the Deep Eddy Bathing Beach, which featured cabins, camping, and concessions. Lorena's Diving Horse was one popular attraction. As seen in historic photographs, a ramp led to a 50-foot-tall (15 m) diving platform over the pool's deep end from which the horse and rider would dive. Other pool amenities included a zip line across the pool and a tall slide, while other attractions included a diving baby and a Ferris wheel. 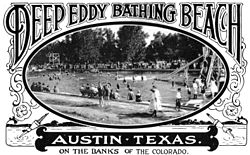 In 1935, the City of Austin bought the property for $10,000. Two weeks after the purchase, a massive flood on the Colorado River destroyed the bathhouse and other improvements, and filled the pool with mud and debris. The Works Progress Administration rebuilt the bathhouse and the pool opened as a public park in July 1936.

Over time, the city has put the property to a variety of uses. While the pool continues in operation, the city separated the western edge of the land as a park and playground named after A.J. Eilers. The city also converted Deep Eddy's bathhouse to alternative uses including a long service as a wildlife science exhibit. In 2004, for safety reasons, the city removed the 70-year-old, 50-foot-tall (15 m) cottonwoods that surrounded the pool. 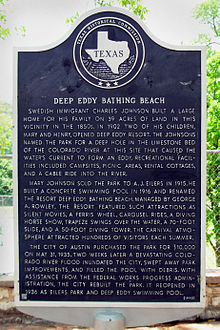 Deep Eddy Pool is listed as a historic landmark on the National Register of Historic Places and has been the inspiration of various works of art. Texas musician Jimmie Dale Gilmore wrote the song "Deep Eddy Blues" about the pool and the nearby bar, the Deep Eddy Cabaret.

Deep Eddy Pool is popular with adult recreational swimmers for its lap swimming pool and with children for its large wading pool. The pool is fed with clear, cold water from a hand-dug 35-foot (11 m) well, and is not chlorinated. Water temperature varies between 65 to 75 °F. The lap swimming pool is generally open during daylight hours all year, though hours are shortened during winter months. The wading pool is open March through October. In summer months, the pool sponsors Splash Party Movie Nights, showing family films on a screen visible by swimmers and waders. The pool supports a number of sporting events, including the Deep Eddy Mile swimming competition. The pool area also contains the offices for the City of Austin Aquatics Department, and the pool is used to train incoming City of Austin lifeguards.

Most of the original bathhouse was closed to the public for many years. The Friends of Deep Eddy, a non-profit association of swimmers and other parks advocates, began a fundraising campaign to renovate the bathhouse to its historic condition in 2002. First construction on the project began in 2005 when the Friends group replaced the dilapidated roof. Final construction and reopening of the bathhouse took place in June 2007.[1]