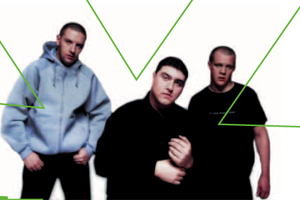 Ultrabeat are an production group based in , who primarily produce dance and and are most famous for their 2003 massive hit .

Their output is generally classed under the genre known as Commercial Dance. Their earlier efforts are recognised as commercial UK productions. Ultrabeat release their work through the All Around The World record label. The group comprises , Chris Henry and .

It is notable that their recordings have been constantly supported by and Radio City 96.7 , Lee Butler, who helped launch them into stardom. He famously aired their of within a few hours of its recording.

The band's debut album, called "", was released on and includes all of their previously released singles. The Album reached #8 in the . Their newest single is a collaboration with producer/singer named "Discolights". It was released on the on the AATW label.

Mike, Chris and Ian were friends before Ultrabeat started. They grew up near each other in Liverpool, Mike and Chris attending schools just a mile away from each other, with Mike attending Cardinal Heenan in and Chris attending Broadgreen High School in the / area. They were part of the same circles of friends, and also s, in the up and coming scouse house scene. They all shopped in the underground dance record shop "3 Beat Records", and they all used to perform DJ sets across Liverpool nightclubs. The three decided to go into Mike's studio for some amateur recording sessions were they made some bootlegs of old happy hardcore tracks from 1997 onwards. The songs were made to improve their DJ sets. Before this, Mike Di Scala and Ian Redman had remixed a handful of tracks using the name "Ultra Beat". [cite web | url=http://www.clubland.fm/uploads/podcasts/clublandpodcast_apr_2007.mp3 | title=Clubland Podcast April 2007| accessdate=2007-04-20 | author= | publisher=/AATW]

"" went on to be a #2 hit in August 2003. It was playlisted on most radio stations including , and was performed live on "". [http://www.bbc.co.uk/totp/artists/u/ultrabeat/video/ultrabeat_pretty_green_eyes.ram] The following single was "" which charted at #12 in the Christmas chart of 2003. Their next single was "Better Than Life", which was released the next year in 2004 and reached #23 in the chart. [cite web | url=http://www.aatw.com/artist.php?id=128052 |title=AATW Ultrabeat Artist Page| accessdate=2007-10-16 |publisher=AATW]

The decline of their mainstream popularity came when their next single, "", was released some 10 months after "Better Than Life". It charted at a low #57 in 2005. Their album "(originally titled "Better Than Life - The Album")" was expected to be released sometime after this but it never materialised and this upset many fans. [cite web | url=http://www.clubland.fm/index.php/artist/show/name/ultrabeat.html | title=Clubland Ultrabeat Artist Page| accessdate=2007-10-09 | author= | publisher=/AATW]

Rebecca Rudd had already sung vocals for the M&C Project, a group which featured both and , on a track called "Coming Back"; as well as a cover of 's "Do You Want It Right Now" and a song called "Magic Touch".

In 2005 she had also did the vocals for Pawn Shop, an alias of Whelan & Di Scala, on a song called "Shot Away" which samples ' "Gimme Shelter". She has also worked with Mike and Chris under the King of Clubs name, and with Mike as Re-Con.

In April 2006 "" was released, and charted at #38 and put Ultrabeat back in the top 40 after 17 months without a top 40 hit. This saw a re-surge in popularity for Ultrabeat. This song, which sampled Scott Brown's "Elysium", featured Rebecca Rudd on vocals for the very first time for Ultrabeat.

Their sixth single, "", was released in August 2007 and it was a with Happy Hardcore artist who has influenced their work greatly.fact|date=December 2007 It achieved #51 in the chart. It was the second single featuring Rebecca Rudd and along with "Elysium", this is also a collaboration with another hardcore artist.

In September 2007 the band released their longly anticipated titled "" which achieved #8 in the charts. Also in September - October of 2007 the band went on a national tour of the with (who are also on the AATW label) on their successful "Everytime We Touch Tour" which included a gig in their of . The release of their album and the national tour saw a boost in popularity for the band. The seventh single, "", was released . [cite web | url=http://www.aatw.com/comingsoon.php?page=1&id=128089 | title=Ultrabeat v Darren Styles - Sure Feels Good| accessdate= 2007-08-04| author= | publisher=All Around The World] [cite web | url=http://www.aatw.com/artist.php?id=128052 | title=Clubland AATW Ultrabeat Artist Page| accessdate= 2007-11-02| author= | publisher=AATW]

After the success of "" and tour supporting , said there may possibly be another tour for Ultrabeat were they are headliners, and he also said he was working on a second album in his head. A new single "" was released in June 2008 in an interview about the new upcoming HTID compilation album Mike Di Scala mentioned work on the new album. A released date of December 2008 has also been set for the album. [cite web | url=http://www.clubland.fm/uploads/podcasts/OCTOBER%20PODCASTx.mp3 | title=Clubland Podcast October 2007| accessdate= 2007-10-29 | author= | publisher=/AATW] [cite web | url=http://www.youtube.com/watch?v=rpVnmEfmt9I | title=Re-Con & Squad-E Interview| accessdate= 2008-06-04| author= | publisher=YouTube]

*2007 - "" (#8) which has become a massive hit with everyone who hears the songs. It is an awesome collection, being both superbly produced and featuring strong songwriting.

In September/October 2007, Ultrabeat were the supporting act for German act .

openned the show by singing the chorus of .
He then introduced Rebecca Rudd onto the stage with the tour dances to sing and .
Rebecca then went off stage, and Mike came back to sing .
Rebecca came back on stage, and the both of them sang as a duet.